Wayleave Press was brought to my attention in 2014, when they published a short pamphlet entitled A Scarlet Thread by the Scottish poet Elizabeth Burns, shortly before Burns’s premature death from cancer in 2015. Burns was and remains a poet I admire extremely highly and I intend to follow up this review with a survey of Elizabeth Burns’s published works, including a handful of titles published posthumously by Wayleave.

The press was established in 2014 by the poet and artist Mike Barlow and many of his paintings grace the sparely elegant covers of the pamphlets he chooses to publish. Publication is by invitation only, at the rate of six to eight pamphlets a year and it is a rare and commendable example of a press that generally publishes more poetry pamphlets by women than men. Wayleave is unfunded by arts bodies and is kept afloat by the interest and custom of its readers. In Barlow’s own words: “I’m doing this for pleasure, the reward and excitement of seeing a collection of poems form into a finished pamphlet ready to go out there in the world.”

Elizabeth Burns’s pamphlet A Scarlet Thread was a sequence of poems responding to works by the Scottish painter Anne Redpath. Jane Routh’s new collection After takes up a similarly ekphrastic mission, aiming to show how all human creativity is a fecund nexus of artistic impulses sparking off each other:

The poem brilliantly charts how one successful artistic achievement in prose triggers a concatenation of felices culpae – so the potter spills pigment in their glaze and then inspires a painter who then inspires a sculptor etc. The poem goes on until it ends with the image of a poem entitled ‘After’ being prompted by the events and the speaker asks us “who knows what lit the fuse” in the first place. What follows is a series of poems based on specific artworks in various media. The joy of having the details of each artwork is that the reader finds themselves in a gallery where the emphasis is on the written word (like the caption) rather than the depictive artwork itself. Thus the word is given precedence over the brush or the sculptor’s chisel. In Routh’s able hands otherwise faded and stilted works of high Victoriana, put on the walls to fill space in the home, come to life in entirely human and relatable ways:

A Victorian lady in a grey silk dress sat at a writing table
downstairs, surviving every move until house clearance.
Highland cattle ranged an uncle’s dining room: an aunt
hid Hylas and the Nymphs in an unlit corner. Moving
to the eighth house, my father bought a Green Lady.

Each artwork conjures up a different personal memory for Routh and there are a number of exceptional artists who have work rendered into poetry here, such as Alec Finlay, John Behan and Ken Currie. The last artist mentioned is represented by what I feel is his masterwork: ‘Three Oncologists’. This large atmospheric painting depicts three eminent professors of oncology, as if ready to enter an operating theatre. There is something both deeply reassuring and cutting edge about their presence, but there is also something primitive and primal about it all, as if these men of science are retreating into a cave, perhaps moving back from Plato’s land of the forms into the x-rays and projections on the back of that cave. Routh is quick to spot all this and point out:

[…] the older tired
but the only one with a lamp,
though you can’t help but notice
all three stoop round-shouldered
from the weight of the world
they’ve been carrying, eyes rimmed red
from exhaustion as they turn

– and that’s
what you’d missed: they’re turning to you,
looking at you, as they draw the curtain aside,
their own moment suspended: your move.

Perhaps the main message of this pamphlet is the idea – fact, rather – that women artists have been consistently and programmatically overlooked. The speaker of ‘Art education (continuing)’ recalls how art school arguments typically ran to the tune of: ‘there have been no great women artists or composers’. This is, of course, pernicious nonsense and Routh attempts to put some unjustly forgotten women artists of the late 19th and early 20th centuries back into consideration, but each poem ends with a dismal couplet. One gallery catalogue laments that “little is known about her” (Flora Reid), the work of another (Bessie MacNicol) is feared lost, and Dorothy Johnstone is forced to give up her position as a teacher upon marriage. Dorothy Smyth seems to fare better, becoming the first woman director of her art college in 1933 but the poem closes with the sobering reminder that she also died that year.

Buy After by Jane Routh from Wayleave Press here.

I’ve come across many collections recently which have a very particular set theme, but few are as original as Sharon Black’s new pamphlet Rib which ascribes a poem to each rib in the human body, thus 24 poems. I would like to designate this particular genre ‘osteo-poetry’. The underlying medical condition of the speaker is only alluded to initially, how their ribs suddenly break during mundane activities and they:

that angry way
I jab my laptop keys.

There’s a particularly cruel irony to the fact that the speaker cannot exert themselves, not even on a keyboard where presumably they want and need to tell their friends about their condition. It’s eventually revealed that the condition that blights the speaker is ‘scoliosis’ causing their ribs to fracture at the slightest exertion: “a case lifted from a train, / a stack of logs is carted to the house, / a grandchild swept up for a cuddle” (from ‘Medical’). This prompts Black to meditate more deeply on the significance of ribs in our life – they are both grand architecture but also imprisonment (see ‘Definitions’). We’re also reminded in ‘Underworld’ which takes us to the macabre Paris Catacombs that the big bones get all the media attention – it’s the skulls and femurs that embellish the catacombs:

of rib or clavicle, a crumbled spine,
a phalanx: blunt little knives
trying to dig their way out.

Bones have long been used for the purposes of divination, so it stands to reason that bones are suited to inspire poetry too. The language of these poems is at times so pellucid it feels like the gaze of the poet is in some way surgical, providing an X-ray to what is happening beneath the skin, beneath all comfortable surface assumptions. In the butcher’s we are shown a ‘Rack’ which is compared to “rungs on a ladder / going nowhere, / a noteless stave.” We are also shown how the demands of society are often at odds with nature, prompting poems about corsets and ‘living doll’ Pixee Fox who had six ribs removed to have a cartoonish hourglass figure. Most affecting perhaps is the poem ‘Architect’ which is about the plight of an anorexic, constantly whittling away at their body:

She surveys the scaffolding

around the building – finished
it will be magnificent. Her bones

confirm she’s nearly there:
each rib smiles an approval.

What is particularly harrowing about this poem – as a teenage sufferer of anorexia myself – is that Black presents the condition (rightly so) as a deviant form of greed. That by starving yourself you become greedy for more, which is in fact less of yourself. These are tremendously powerful poems that make their music on the xylophone of the human rib cage which is both protection and incarceration to our vitals at the same time. 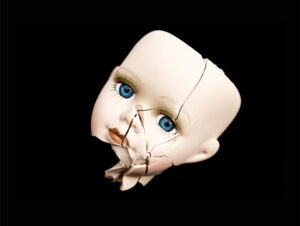