A single umbrella is enough to start a revolution

Matthew Stewart reviews The Storm in the Piano by Christopher James (Maytree Press, 2022)

On first acquiring a poetry collection, there’s a tendency to flick through it and check out the acknowledgements and bio before moving on to the poetry itself. This process is dangerous because it’s liable to prejudice us before we tackle the poems. In the case of Christopher James and his new pamphlet, The Storm in the Piano, the risk is especially accentuated.

James is a serial prize winner. Not only did he win the National Poetry Competition back in 2008, but this manuscript also includes four first-prize-winning poems and three second place winners. As a consequence, a potential ambivalence kicks in. On the one hand we start our reading in the knowledge that these poems have already received significant recognition and praise. And on the other, we might believe, erroneously, that James is a show pony who has learned how to tick judges’ boxes.

One of Chris James’ clear strengths, and a key reason why his work is so successful in competitions, is his ability to create gorgeous set-pieces that generate and inhabit their own worlds. However, as this pamphlet demonstrates, they also work in unison when placed alongside each other. In other words, his aesthetic is far more powerful, coherent and moving than a mere technique to be applied to winning awards. Instead, his priority is demonstrably the reader.

James is a serial prize winner. Not only did he win the National Poetry Competition back in 2008, but this manuscript also includes four first-prize-winning poems and three second place winners

The Storm in the Piano features a huge cast in all sorts of settings, often portraying the surreal without artifice in everyday language as if the situation were to be expected. One such example comes in ‘Dorothy Wordsworth is Skydiving’:

She emerges from a cloud,
at a hundred and twenty miles an hour.
In her black bonnet and shawl, she is
a spider dropped from space. As she falls,
she pockets the moon like a lost shilling.
From the air, Grasmere looks like the face
of the husband she’ll never have, but she finds,
there is nothing lonely about the clouds.

In Christopher James’ hands, contexts that might seem impossible or absurd suddenly become relevant and real, as in ‘The Archbishops at the Lido’:

Through the mist, Charles Longley floats
on his back, writing his sermon on a cloud.
George Carey has knotted his cassock
and is slowly inflating it as a life saving device.
He wears a tattoo of the double helix
on one shoulder and an ichthys on the other.
Selling tickets, Thomas Becket sits at the turnstile.

These extracts demonstrate a clear awareness of the importance of otherness in terms of people, places and periods, implicitly reflecting back on our own lives and our own interpretations of our surroundings.

Moreover, alongside his use of accessible sentence structures, James also possesses an eye for gorgeous images, though never for their own sake, always yoking them to the effect they can generate, as in the following examples from the final stanza of ‘The Dream Coat of Bellaghy’:

Striding in from the gloaming, into
the god-glow of a pub, you loved it best
hung up on a peg to dry, smelling of peat smoke
and rain, turning bronze and then gold
through the prism of a pint. Now, disembodied,
behind glass, it is invested with a power
beyond itself, emptied of its dreamer,
but not yet emptied of its dreams.

The last two lines draw the poem to a satisfying close, while simultaneously reaching out beyond its physical limits, achieving an emotional resonance in its reader, as is typical in the endings of Christopher James’ poems, even when dealing with contexts that might initially appear removed from our sensibilities. One such instance is ‘The Watchmaker of Idlib’, which concludes as follows, drawing us in, moving us intensely:

At dusk, he listens to the crickets in the grass
and follows the slow sweep of the shadows.
He eats his shawarma, then winds his son’s watch,
his time cut short. With a father’s touch, he sets
it ticking like the beat of a sparrow’s heart.

Whether using the first or third person, the poet stands far further behind these poems than is common these days, thus avoiding any temptation to conflate the poet and the narrator. Dramatic set piece after dramatic set piece, Christopher James invites us into his vast array of worlds via an aesthetic approach that feels pretty much unique in the context of contemporary UK poetry.

Dramatic set piece after dramatic set piece, Christopher James invites us into his vast array of worlds via an aesthetic approach that feels pretty much unique in the context of contemporary UK poetry

When considering The Storm in the Piano as a whole it’s useful to invoke a comparison between a poetry collection and a music album. Rather than simply a series of outstanding hits, these poems work together despite their apparently disparate nature, demonstrating a cogent world view. Not only in technical and artistic terms, but also in their capacity to move their reader and launch us on our own journeys, The Storm in the Piano is a pamphlet to savour. Oh, and its cover features two of James’ own terrific paper cut-up artworks that are worth the price on their own, even before considering the poetry inside. Some people are just far too talented!

Matthew Stewart works in the Spanish wine trade and lives between Extremadura and West Sussex. Following two pamphlets with HappenStancePress, his first full collection, The Knives of Villalejo, was published in 2017. More recent poems have featured in The Spectator, The New European and Wild Court. Read Matthew Stewart’s blog Rogue Strands here. 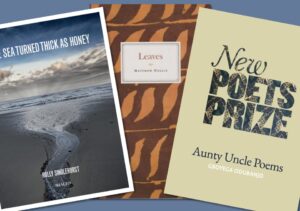