Charlotte Gann reviews Towards a General Theory of Love by Clare Shaw (Bloodaxe, 2022)

I was drawn to this book by its title and cover: a detail from Hieronymus Bosch’s ‘The Garden of Earthly Delights’, a muddy, intriguing scene. As soon as I opened it I realised the collection’s implicit subject was attachment, and its deficit. I was gripped. I’ve written a collection myself ‘about’ early attachment, and I know both how key a subject it is – I respond to the ambition of Clare Shaw’s title – and how hard it is to “put words to it”, as she has it in the poem ‘Monkey and I Discuss the Difficulty of Working Therapeutically with Non-verbal Traumatic Memories’.

Personal poems about key relationships – ‘This Is About My Mother’ one poem is called, and that could serve as a kind of refrain – interweave with ones concerning a character called ‘Monkey’. The core idea for Monkey, which we’re pointed to from the epigraphs on, is of Harry Harlow’s famous experiments into the developmental effects of maternal deprivation on infant rhesus monkeys. The juxtapositioning of these two sets of poems works rather beautifully. On the one hand we have poems like ‘Elegy for My Grandma’, which paints a delicate picture of a safe, containing place:

and the taste of hot milk before bed, two biscuits –
how I woke up to song from the garden

before turning quite abruptly to the other side of a story, the one the poet doesn’t “want to write about”:

I love the sounds of this – the simple choices of noun and adjective – as it flows uninterrupted, or unheld, by punctuation. It works for me, as a poem exploring, it feels, a formative relationship besieged by instability.

On the other hand, there are those distinctive Monkey poems. As a set, alone, they’re interesting. And I like how they appear interspersed and then intensify and fall away again as the book progresses. At the launch of Towards a General Theory of Love the poet talked about the work as a conversation between her and Monkey, and the Monkey poems do bring their own diction, I think – a new way of circling her subject. “You were the seed and the leaf and the fruit”, starts ‘Monkey Writes a Poem About His Mother’. The same poem ends “You were not wire. You were not wire.” This conjures, of course, the image of those poor caged monkeys with only a wire and cloth ‘mother’.

There’s a freshness in her expression, like waking anew to the language

The simplicity of language throughout this collection heightens my sense of a childlike-adult, “walking through” these experiences, memories, poems. Here’s the start of ‘My Bedroom’:

I am walking through the rooms
in my old house.
There are many of them.

If you leave a baby long enough,
it learns not to cry.

This reminds me of Mimi Khalvati’s poem ‘Villanelle’, with its refrain “No one is there for you. Don’t call, don’t cry.”

Many of the poems seem cleverly wrought. For instance, I like the way ‘This is a very small poem’ – which actually isn’t, especially – calms itself as it goes, keeping quiet, staccato, like someone working on their breathing so as not to cave in to panic:

I wished her freedom

There are also poems addressed to a child. “Sleep / runs through me like stone” reads ‘Nocturne for My Daughter’ – again made powerful and new, for me, by its simple single-syllable vocabulary. This is the other side of attachment, of course: the new mother-love now felt, in turn, towards a daughter. ‘Child Protection Policy’ starts: “Once, everything felt like threat. / Only my body could keep yours / alive.”

There’s a freshness in her expression, like waking anew to the language. ‘Everything Is a Gift’ marries these two aspects: trauma and aliveness. “The gift of the city at night. / The gift of the light on a knife.” I get a real sense of poet as pioneer, writing from scratch her own story. So, ‘Lorry Driver’ ends, with its perhaps-echo of Robert Frost:

I want life to drive towards me all lit up.
I want to be awake through the night
with hundreds of miles still to go.

And these poems seem like that too, to me: lit up, and driving towards us. Being insecurely tethered means also freedom, in its way. And the love poems in particular seem to me to speak to this.

Touches of humour, and consolations of the natural world … help to punctuate the emotional intensity

Another device the collection leans on heavily is humour. For instance, ‘Instructions for Care’ starts: “If it becomes apparent that I’m in trouble / please take me to a National Trust property”, which I can relate to but also makes me laugh. So, touches of humour, and consolations of the natural world – “The hills are as bright as paper” reads ‘Night Swimming, Derwentwater’– help to punctuate the emotional intensity. I find that effective. Humour often can help, of course, in this way: as containment (though it’s a balancing act: I might have edited out a handful of the poems as not carrying their due weight in the whole). I think the titles of many of the Monkey poems particularly are, essentially, humorous – almost cartoon-like, as of course is the very idea of this character, ‘Monkey’. But most the poems themselves I find affecting. Two facing poems are ‘A Psychological Study of The Strange Situation’ and ‘Monkey and I Discuss the Difficulty of Working Therapeutically with Non-verbal Traumatic Memories’. The first starts:

Tonight, I want to talk about attachment
but Monkey is quiet

If I could put words to it, says Monkey,
that would be half the problem solved.

If I can’t tell you my story, he says,
I’ll live there alone.

I find it sad, deeply sad, as the poem then ends: “his eyes are an empty sky right now / and his face is an empty room”.

Charlotte Gann is an editor from Sussex. She has an English degree from UCL, and an MA in Creative Writing and Personal Development from the University of Sussex. She lived in London for years, working as Editor of Health Which?, among other roles, then moved to Brighton and had two sons. Her pamphlet, The Long Woman (Pighog Press, 2011), was shortlisted for the 2012 Michael Marks Award and her two full collections, Noir (2016) and The Girl Who Cried (2020), are published by HappenStance. She’s a freelance editor, helps on Sphinx Review, and is developing a project she’s calling The Understory Conversation. 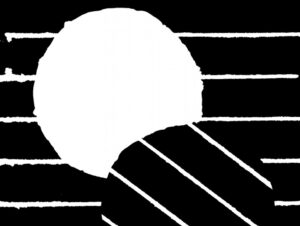 The space between bars