On his blog, Martin Edwards describes himself as “not an outsider exactly but on the outside of the inside.” Many poets would agree that this is where many of us exist, somewhere on the periphery, with one chilly foot stuck outside the glow from the camp fire, and it is this position that gives us the perspective, and often the impetus, to write.

Edwards’ new collection, recently published by Smokestack, is The Out-Islands. The Caribbean Out-Islands are a scatter of islands, the remoter part of the Bahamas, mostly uninhabited, once safe-havens for pirates, escaped slaves and the super-rich. Edwards lived close to the Out-Islands for some years, and their tease of paradise, peace and plenty, provides a rich seam for his book about “travellers and tourists, surfers, swimmers and drowned sailors.”

The poems Edwards writes are often small in size but large in scope. They are mostly quiet, and often quietly rebellious. He has a close eye on the natural world; he notices little things – a robin, a tiny frog, an oystercatcher – and builds jewel-like poems around them with stunning imagery. Ants are “consonants blown loose / from the peg of a vowel” in ‘Book with ants and a fly’, and he describes the Pacific ocean’s “vast origami / folding and unfolding” in Paperwork. In ‘Rainstorm with Goldfish’ his goldfish is

and “old people, paused / on balconies / like photographs in open drawers” populate ‘Citizen’. He also plays with allusion, such as in the poem ‘Swimming’, which ends with “hands blue / the shoreline // very far and few” which put me, at least, in mind of the Jumblies.

The poems Edwards writes are often small in size but large in scope. They are mostly quiet, and often quietly rebellious

But he’s not only what one might call a nature poet, an observer of the natural world. He has one foot firmly in the political sphere too, referencing his past as a member of The Party, visits behind the Iron Curtain (oh those shoddy stick-less stamps), the fall of the Berlin Wall, the release of Mandela, and South American drug planes. He’s at home in town in ‘Bournemouth’, spray painting a church door with graffiti,

And his politics are apparent in the text of the graffiti he sprays, blood is the price of petrol, in the currency which “ripened and began to smell” under the pillows in ‘Shanty Town’, and in the wry poem ‘Oxford Town’ (after Brecht). He is political, but with a degree of distance from his younger self, and with the insight that comes as we get older and see the world changing, not necessarily for the better. His poem ‘In 1989’, looks back to simpler, more hopeful times with a degree of wistfulness and much compassion, and ends,

as the night ferry

slows and sways
on the swell,
slipping

away to the out-islands,
prodigal at the bow-rail
flipping a fag-end

Edwards also writes personal poems about his family. Many of these are deeply affecting, perhaps especially for the parents among us. One such is ‘The Lecture’, in which he writes about his child’s night terrors, and references the long trek from High Beach Asylum in Essex to Helpston, Peterborough, which the poet John Clare made in 1841. The poem ends,

so he huddles at my side,
cold and frightened, learning to be alone

on the long walk home.

I was less convinced by a couple of longer poems which contain lots of autobiographical detail, including names of friends and details of specific experiences, but which don’t seem to have the economy and precision of his other work. But I like the way Edwards uses humour, as in his poem about a Grandfather clock and his Grandfather’s tackle, “scalped in Somme-forests / by a shrapnel flake / his pendulum / and weights / down there in the mud”, and I like the way he allows ambiguity into his poetry – it feels wise, interesting, honest. 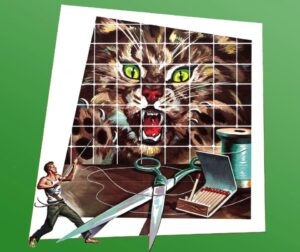 After the first phase, after the great fall

Unpack a poem: Hilary Menos on 'Incredible' by Simon Armitage