A flower, blossoming / out of the hole in my face

Khadija Rouf reviews Bless the Daughter Raised by a Voice in Her Head by Warsan Shire (Chatto & Windus in collaboration with Flipped Eye, 2022)

Psychotherapist Judith Herman has said, “The ordinary response to atrocities is to banish them from consciousness. Certain violations of the social compact are too terrible to utter aloud: this is the meaning of the word unspeakable. Atrocities, however, refuse to be buried […] Folk wisdom is filled with ghosts who refuse to rest in their graves until their stories are told […] Remembering and telling the truth about terrible events are prerequisites both for the restoration of the social order and for the healing of individual victims.” [1]Judith Herman, Trauma and Recovery: The Aftermath of Violence — From Domestic Abuse to Political Terror 2015. New York: Basic Books

Warsan Shire’s first full length poetry collection is full blooded, searingly honest and richly observed. Her poetry compels the reader to engage with deeply disturbing topics. These poems span huge themes of trans-generational trauma, forced migration, sexual violence, and grief. They make you look in consciously, and they speak in a way that demands truth telling and healing. Shire writes at the intersections of girlhood, womanhood, faith, ethnic culture and being Black, and she does so with such skill and wisdom that it is hard to believe these poems have not existed in the world before. They feel both ancient and contemporary, steeped in tradition but fresh, and startling in their perspectives.

Knowing something of her context increases my respect for her work. Shire is a British Somali poet, born in Kenya and then living in the UK for most of her life. Her father was forced to leave Somalia after writing about government corruption, and before the civil war broke out. She refers to her parent’s dislocation, their mental health difficulties, her own mental health struggles, and also her experiences of being a young carer. She has spun beautiful and ethereal work from suffering — her work commands active witnessing. One cannot be a passive bystander in the reading of her work.

Shire has already won accolades for her work. In 2012 she won Brunel’s International African Poetry prize, in 2013 she became the Young People’s Laureate for London. In 2015 her poem ‘Home’, went viral as an anthem for the plight of refugees. She has collaborated on Beyoncé’s Lemonade album, and also made a film about African girl refugees, Brave Girl Rising. This collection is part of her continuing trajectory as rising star.[2]Ellen E Jones (26 February, 2022) Warsan Shire talks to Bernardine Evaristo about becoming a superstar poet: ‘Beyoncé sent flowers when my children were born’ in The Guardian, DOI accessed 25th … Continue reading

The cover, featuring art work by Natalie Osborne, is striking. The front shows a large and beautiful face in black and white of a woman musing, chin on hand— presumably a representation of the poet. The back cover shows the back of her head, with tumbling thick black hair. You are invited into her head in the pages in between. The end papers are white hair combs on a vivid pink background. Pink is a colour which features in her poems (“his tears pink, gelatinous clots, unable to fall” in ‘My Father, the Astronaut’), the “pink lotion” of being born (‘Extreme Girlhood’), the pink of a hymen (‘Bless the Qumayo’). Colours appear as motifs in the collection — white, blue, pink, gold, red and black — with the colour black, particularly associated with Black hair, referenced many times in the book. So often, Black hair is treated as a source of othering.

Shire has divided her collection into four sections — What doesn’t kill you, This is not a Love Song, Are you there, God?, and Testament. Each section bustles with life and vividness. What is contained within the hard covers of the collection are poem prayers — hypnotic, rhythmic. These incantations subvert the holy, and linger with you. Her work contains contemporary cultural references — Gregory Porter, Grace Jones, Gloria Gaynor, and even, I think, a line from Britney Spears — but also the ancient, referencing surahs (Muslim prayers), blessings, ancestral homelands. We meet family members, we hear of homes and forced migrations, abuses and murder. Her imagery is full of texture, thread upon thread of meaning. Shire gathers up lost women and girls, draws them in close, writes about them, remembers them.

To reiterate, Judith Herman talks of the natural turning away from trauma, but something in the mystical nature of Shire’s work makes you look in; she speaks about the unspeakable in compelling, humane and disturbing ways. She has spoken of her writing as being immersed in culture, language, faith, being the daughter of migrants, but also how her work is shaped by other influences in her life. [3]Anya Wassenberg (23 April 2013) Interview: Warsan Shire’s Raw and Vulnerable Poetry. Okay Africa, DOI accessed 25 March 2022

The poems which stood out to me most keenly speak about the position of women, the intersection with blackness, and how identities are imposed from the very moment of birth, as portrayed in ‘Extreme Girlhood’:

Bless the baby girl,
caul of dissatisfaction,
patron saint of not
good enough.

In ‘Assimilation’, she writes about the desperation of refugees, their precarious existence, their reduction to a set of papers and the maze of bureaucracy they have to navigate to prove they are human.

The refugee’s heart has six chambers.
At each and every checkpoint the refugee is asked
are you human?

This commentary on the potential harms of an inhumane immigration system resonates now, when we are seeing vast numbers of people forced to migrate because of war, climate disaster or political persecution. There were an estimated 82.4 million forcibly displaced refugees worldwide at the end of 2020 [4]UNHCR 2021. This could be any of us. In ‘Home’, she shows the impact of harm upon harm, the reality of being forced to run away, the pain of hearing of others being forced to run too:

No one leaves home unless home is the mouth of a shark. You only
run for the border when you see the whole city running as well.

And on hearing news of homelands she writes:

I watch the news and my
mouth becomes a sink full of blood.[5]Conversations about home (at a deportation centre) A poem by Warsan Shire.

Shire gathers up lost women and girls, draws them in close, writes about them, remembers them

She writes about the intersections of trauma, gender and forced migration in compelling ways. In ‘Bless your Ugly Daughter’ she talks of grief, and how others turn away, too distressed by the dangerous voyages that migrants have to make to be able to see the needs of a child:

She knows loss intimately.
A child relatives avoided,
felt like splintered wood, smelled
of sea water, she reminded them
of thirst, of war.

In ‘Midnight in the Foreign Food Aisle’, she writes of the uncle who is lonely and lost at the local supermarket — he finds himself alone, dislocated and praying in his mother tongue, in front of halal meat. Again, these gestures capture the aftermath and grief of forced migration. Shire captures beautifully the interface between trauma and loss — she captures so much about the faded hope in her parents, the decimation of sleep, the loss of identity in a foreign country which is ambivalent about whether it wants you or not.

In ‘Photographs of Hooyo (Harlesden, 1990-2000)’, Shire writes of her mother’s grief and yearning, and what she has had to leave behind abruptly in order to survive. Though, of course, as Judith Herman says, these ghosts refuse to be buried — they show up:

Hooyo in bed, holding negatives up
to the light, squinting at undeveloped ghosts,
names of the dead thrown behind her
like salt, her atrophied youth in storage,
mumbling Magool under her breath,
war flaying Somalia alive.

This poem, told through a series of Polaroids, captures the impact of constant anxiety, the loss of youth, the loss of family. We feel this mother, clinging to the photographic negatives and mumbling, whilst war is “flaying Somalia alive”, such devastating imagery captures the ongoing agony of war, even for those who escape its physical dangers.

In ‘Hooyo Full of Grace’ Shire leads us further on into her mother’s journey into places where her mother is not there. This is a prayer to an absent mum struggling with her own mental health. It is an incantation, full of sacred rhythms, but standing starkly against the religious iconography of the Mother figure, tending to her children, meeting all their needs:

Goddess of absence, Holy Mother,
Our Lady of Leaving Children
With Strangers, patron saint of
the babies will raise themselves.

Shire also writes about sexual abuse, an ever present undercurrent in the entire collection. In ‘Bless this School for Girls’ we meet Falis, who knows so much about women’s bodies. No-one asks about her understory — how does she know so much? In ‘Buraanbur’ and ‘The Abubakr Girls are Different’ we are confronted with the abuse of female genital cutting and its impact on young girls. In ‘Hooyo isn’t Home’ she writes about a girl trying to wash clean in the aftermath of assaults:

While in the shower, you break down.
While you wash your body you realise it is not your body.
And at the same time, it is the only body you have.

The breadth of such experiences highlights the volume of experiences of rape, abuse, and violence, and how it is almost normalised.

And there is spark to fight back, to survive and thrive. In ‘Angela Bassett Burning it all Down’ we see the impact of a film on other women who want to leave their husbands and their shoddy violence. In ‘Bless Grace Jones’ we are invited to celebrate Grace as a powerful icon, strength giver, learning to put her own needs first. The collection ends beautifully, with ‘Nail Technician as Palm Reader’ inviting us into the magical realism of something akin to a Frida Kahlo painting

I wake as the second girl crawls
head first up my throat —
a flower, blossoming
out of the hole in my face.

These poems bear many readings. Each time I read, I felt I saw something more clearly, then less clearly. There are puzzles and then there are last lines which burst the poems open with clarity and sharpness. They should be read by everyone, but particularly those with an empathy gap for the plight of refugees, or for the sufferings exacted upon women and girls. This collection speaks fiercely of trauma and victimhood, but also of meaning making, social connections and love, and of survival and hope.[6]Caroline Sanderson (17 December 2021) Warsan Shire on Bless the Daughter Raised by a Voice in Her Head: “Poetry is a balm for the heart”, The Bookseller, DOI accessed 25 March 2022

Dr Khadija Rouf is a clinical psychologist and writer, with a growing interest in the arts and mental wellbeing. She has been working in the NHS since 1991. She also has an MA in Poetry from Manchester Metropolitan University. Her poetry has been published in Orbis, Six Seasons Review, Sarasvati and she is honoured to be included in the NHS poetry anthology, These Are The Hands, edited by Katie Amiel and Deborah Alma (2020). Her poem Tacet recently won joint second prize in the health professional’s category of The Hippocrates Prize for Poetry and Medicine, and her pamphlet House Work was published on International Women’s Day 2022 by Fair Acre Press and is available here. 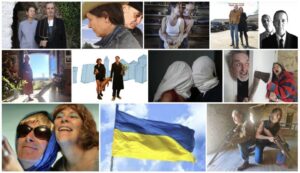 One year of daft editorial pictures