Put me in a drum and bang me

Almost all twenty-four of the poems in Helen Bowell’s debut pamphlet directly address the romantic relationship between the narrator and an unnamed character referred to only as “the barman”. The opening poem, ‘Lobster’, begins:

Here’s one from near the end:
the barman’s cooking with no music on,
no wine, no candles, and the knives are blunt,
he slips and nips himself chopping onion –
Fuck!

The significance of “one from near the end” becomes apparent only as one reads further on in the pamphlet, with ‘Barman on Tour (II)’, for example, coming before ‘Barman on Tour (I)’, and the opening of the book’s final poem, ‘Scrabble’ – “Here’s a story from the start” – confirming that the poems are vignettes from the relationship arranged backwards through time.

The vignettes are multifarious. In ‘Open Your Mouth and See What Happens’, for example, the narrator admits putting “sixteen books by [her] bedside for show”; in ‘Monsieur le Barman’, the couple do “verb drills” to help the barman learn French, a language the narrator speaks; and in ‘Chicken’, the barman’s ill-advised preparation of “his own damn chicken ruby” makes them both ill.

A poem concerning the couple’s sex life provides the wonderful line, “Put me in a drum and bang me” (‘If You Can Go to Hell for Lust’), while their holiday tensions are ordinary (‘The Moderating Influence of the Sea’):

I take my clothes off.
The barman waits on the sand.

He didn’t bring his trunks,
though he knows how I love to swim.

The somewhat deadpan tone of these lines is found throughout The Barman, sometimes recalling Emily Berry, whose work is acknowledged as inspiring ‘Front Crawl’, a poem about the barman’s fear of swimming.

Barmen in general need to be good at relating to people at a superficial level, but at times this pamphlet suggests that this barman isn’t taking his relationship with the narrator much further than that. In ‘If I Were an AI Would the Barman Tell Me?’ the narrator questions the extent of her love for the barman, who is described elsewhere as unable to say “what luck [is] to save his life” (‘Front Crawl’) or ever “let anything go” (‘Scrabble’).

The Barman, which was a Poetry Book Society Pamphlet Choice, is supremely coherent yet leaves the reader curious regarding what happened next

The relationship in The Barman has two complicating factors, so to speak: sexual orientation and cultural background. In one of several prose poems, ‘The Barwoman’, the narrator asks the barman – as he flicks through television channels that include Daniel Craig “running on buses again” – “if he’s ever thought about other men […] in a sexy way.” The barman laughs, says no, announces his tiredness, and goes to bed – apparently oblivious to the narrator’s desire “for him to ask [her] back.”

‘The Barman Puts the Kettle On’ presents a scene from an early stage in the relationship in which the tea the barman makes is:

[…] too hot, too white.
These things take time. I want to know: what
sandwich would he be? What Disney princess?
I only know the names of two of his friends –
both men – and he hasn’t asked where
I’m really from yet.

In ‘Barman on Tour (II)’, the couple visit China. “Things are getting serious but not so serious that I tell my very distant family we’re there.” In the street, for “the first time in his life”, people stare at the strange white barman. A shopkeeper tells the narrator she is beautiful; “I guess from her smile and my little Chinese that she’s saying I’m mixed.”

Back in the UK, where during a fight the narrator threatens to “vote / for Boris” (‘Fighting the Barman’), it is she who is stared at and othered. In ‘If I Were an AI Would the Barman Tell Me?’ she yearns sometimes to simply, “think about / my lovely boyfriend / like a normal person” – yet at other times she is “secretly pleased” not to be like “the barman / and his people”:

I mean, look at them.
They traipse mud
through the house
and don’t know how
to eat lo mai gai.

But the narrator also has issues. In ‘I Know He’d Never Really Say This But’, the barman’s racist accusation against the narrator turns out to have been dreamt by her, and this prompts reflection: “Sometimes the hardest questions / are the ones you ask yourself.”

An intriguing collection, and a must-have for relationship junkies

The pamphlet’s take on the combination of east-west and queer-straight relations is reminiscent of Naoise Dolan’s debut novel set in Hong Kong, Exciting Times. In the novel the queer white female narrator leaves Julian, an English banker, for a queer Asian female lawyer, partly because of Julian’s inability to process emotions. In The Barman, the narrator remarks in the poem ‘Small’ that because the barman can’t process his feelings, they “leak from him like chip grease.” Julian the banker was more dapper than the barman, who is “always wiping his glasses / on his beer-battered t-shirts. Really, / the glasses clean the clothes” (‘The Barman’s Eyesight’), yet in ‘Small’ the narrator declares her love of chips: “I’d lick / the newspaper clean, if I had to.”

The Barman, which was a Poetry Book Society Pamphlet Choice, is supremely coherent yet leaves the reader curious regarding what happened next. With the backward narrative progression, this amounts to asking what happens after the pamphlet’s first poem. An intriguing collection, and a must-have for relationship junkies. 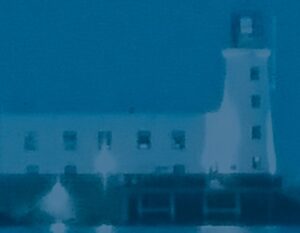