Help the next person find their way through the dark

We have picked six New Year’s poems with a difference to help you navigate the end of one year and the beginning of the next – poems by David Constantine, Ogden Nash, Joseph Brodsky, Kim Addonizio, Joy Harjo and Naomi Shihab Nye

First off, here’s David Constantine’s ‘New Year Behind the Asylum’, an astonishing poem which describes a moment of intimacy between father and son.

New Year Behind the Asylum

There was the noise like when the men in droves
Are hurrying to the match only this noise was
Everybody hurrying to see the New Year in
In town under the clock but we, that once,

He said would I come our usual Saturday walk
And see it in out there in the open fields
Behind the asylum. Even on sunny days
How it troubled me more and more the nearer we got

And he went quiet and as if he was ashamed
For what he must always do, which was
Go and grip the bars of the iron gates and stand
Staring into the garden until they saw him.

They were like the animals, so glad and shy
Like overgrown children dressed in things
Handed down too big or small and they came in a crowd
And said hello with funny chunnering noises

And through the bars, looking so serious,
He put his empty hand out. But that night
We crept past quickly and only stopped
In the middle of the empty fields and there

So faint I wished we were hearing nothing at all
We were so far away in our black fields
I felt we might not ever get back again
Where the people were and it was warm, and then

Came up their sort of rejoicing out of the asylum,
Singing or sobbing I don’t know what it was
Like nothing on earth, their sort of welcoming in
Another New Year and it was only then

When the bells and the cheerful hooters couldn’t be heard
But only the inmates, only the poor mad people
Singing or sobbing their hearts out for the New Year
That he gripped me fast and kissed my hair

But listened himself, listened and listened
That one time. And I’ve thought since and now
He’s dead I’m sure that what he meant was this:
That I should know how much love would be needed.

Read ‘New Year Behind the Asylum’ by David Constantine on tumblr

On a considerably less serious note, here’s ‘Good Riddance, But Now What?’ by Ogden Nash.

Good Riddance, But Now What?

Read ‘Good Riddance But Now What?’ by Ogden Nash at The Yorkshire Times

Joseph Brodsky wrote a Christmas poem every year, and ‘1 January 1965’ was one of the earliest, written while he while he was in internal exile in Norenskaya, in the Arkhangelsk region of northern Russia. In the old Soviet Union gifts were exchanged on New Year’s Day, and in the Russian Orthodox calendar, Christmas falls on January 6 – hence the date of the poem.  The end pays homage to Robert Frost‘s ‘The Gift Outright’. Reading it is like giving a New Year’s present to yourself.

The Wise Men will unlearn your name.
Above your head no star will flame.
One weary sound will be the same—
the hoarse roar of the gale.
The shadows fall from your tired eyes
as your lone bedside candle dies,
for here the calendar breeds nights
till stores of candles fail.

What prompts this melancholy key?
A long familiar melody.
It sounds again. So let it be.
Let it sound from this night.
Let it sound in my hour of death—
as gratefulness of eyes and lips
for that which sometimes makes us lift
our gaze to the far sky.

You glare in silence at the wall.
Your stocking gapes: no gifts at all.
It’s clear that you are now too old
to trust in good Saint Nick;
that it’s too late for miracles.
—But suddenly, lifting your eyes
to heaven’s light, you realize:
your life is a sheer gift.

Read ‘1 January 1965’ by Joseph Brodsky on the Poetry Foundation

Kim Addonizio’s poem ‘New Year’s Day’ comes from her collection Tell Me (2000). As she walks in nature the poet contemplates youth, age, heartbreak, and eventually arrives at a kind of acceptance – not a bad way to start the year.

The rain this morning falls
on the last of the snow

and will wash it away. I can smell
the grass again, and the torn leaves

being eased down into the mud.
The few loves I’ve been allowed

to keep are still sleeping
on the West Coast. Here in Virginia

I walk across the fields with only
a few young cows for company.

Big-boned and shy,
they are like girls I remember

from junior high, who never
spoke, who kept their heads

lowered and their arms crossed against
their new breasts. Those girls

are nearly forty now. Like me,
they must sometimes stand

at a window late at night, looking out
on a silent backyard, at one

rusting lawn chair and the sheer walls
of other people’s houses.

to make them happiest,
and wonder how their lives

have carried them
this far without ever once

explaining anything. I don’t know
why I’m walking out here

with my coat darkening
and my boots sinking in, coming up

with a mild sucking sound
I like to hear. I don’t care

where those girls are now.
Whatever they’ve made of it

they can have. Today I want
to resolve nothing.

I only want to walk
a little longer in the cold

blessing of the rain,
and lift my face to it.

Joy Harjo’s poem ‘For Calling the Spirit Back from Wandering the Earth in Its Human Feet’ directs us to search for a more harmonious way of living with nature and ourselves. With wisdom and inspiration which come from her Native American culture, Harjo offers a universal imperative to all of us: “call your spirit back”. Then help the next person.

Put down that bag of potato chips, that white bread, that bottle of pop.

Turn off that cellphone, computer, and remote control.

Open the door, then close it behind you.

Take a breath offered by friendly winds. They travel the earth gathering essences of plants to clean.

Give it back with gratitude.

If you sing it will give your spirit lift to fly to the stars’ ears and back.

Acknowledge this earth who has cared for you since you were a dream planting itself precisely within your parents’ desire.

Let your moccasin feet take you to the encampment of the guardians who have known you before time, who will be there after time. They sit before the fire that has been there without time.

Be respectful of the small insects, birds and animal people who accompany you.
Ask their forgiveness for the harm we humans have brought down upon them.

Don’t worry.
The heart knows the way though there may be high-rises, interstates, checkpoints, armed soldiers, massacres, wars, and those who will despise you because they despise themselves.

The journey might take you a few hours, a day, a year, a few years, a hundred, a thousand or even more.

Watch your mind. Without training it might run away and leave your heart for the immense human feast set by the thieves of time.

Do not hold regrets.

When you find your way to the circle, to the fire kept burning by the keepers of your soul, you will be welcomed.

You must clean yourself with cedar, sage, or other healing plant.

Cut the ties you have to failure and shame.

Let go the pain you are holding in your mind, your shoulders, your heart, all the way to your feet. Let go the pain of your ancestors to make way for those who are heading in our direction.

Call upon the help of those who love you. These helpers take many forms: animal, element, bird, angel, saint, stone, or ancestor.

Call your spirit back. It may be caught in corners and creases of shame, judgment, and human abuse.

You must call in a way that your spirit will want to return.

Speak to it as you would to a beloved child.

Welcome your spirit back from its wandering. It may return in pieces, in tatters. Gather them together. They will be happy to be found after being lost for so long.

Your spirit will need to sleep awhile after it is bathed and given clean clothes.

Now you can have a party. Invite everyone you know who loves and supports you. Keep room for those who have no place else to go.

Make a giveaway, and remember, keep the speeches short.

Then, you must do this: help the next person find their way through the dark.

Read ‘For Calling the Spirit Back from Wandering the Earth in Its Human Feet’ by Joy Harjo at poets.org

Time to wave goodbye to the New Year with our last poem, ‘Burning the Old Year’ by Naomi Shihab Nye, from her 1995 collection Words Under the Words: Selected Poems. The poem explores themes of absence, time, the inevitability of change, and the temporary versus the permanent. Free yourself, she seems to say, from attachments to the material, leave behind the old year, and embrace the new.

So much of any year is flammable,
lists of vegetables, partial poems.
Orange swirling flame of days,
so little is a stone.

Where there was something and suddenly isn’t,
an absence shouts, celebrates, leaves a space.
I begin again with the smallest numbers.

Quick dance, shuffle of losses and leaves,
only the things I didn’t do
crackle after the blazing dies. 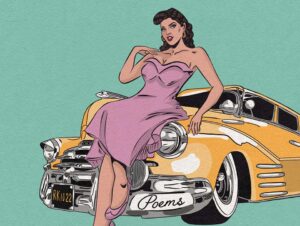