Dream into Play is number 38 in the stylish livery of Poetry Salzburg pamphlets and beautifully produced on a quality of paper you rarely encounter these days. It falls open, as stapled pamphlets do, at its centrefold: a poem about an artist, a poem about a deer. Flicking back and forth: poems about film, quite a few word-game and list poems, Atropos, Japanese screens, exercise, Barthes, music bands – an eclectic mix.

It’s unlikely that many readers will be familiar with all of Richard Skinner’s references, so I’ll start with ‘The Dogs of Fo’, a particularly successful poem because even if you’ve never heard of them, you need bring no extra knowledge to this one: it holds elegantly and economically within itself the making and backstory of the ‘dogs’, opening:

With a brush like a needle,
Cheng touches the yellow
into the eyes of the creature.
Their manic gleam,
the red roar and blue skin,
will all be ignited by the glaze.

Richard Skinner makes a neat shift to the history of the creatures through Cheng, who “has spoken to many men”, enabling the poem to slide seamlessly into the hearsay and myth behind them.

By contrast, ‘The Black Objects’, a poem “for Leonora Carrington” may be less straightforward to read without some knowledge of her early personal life and memoir of being in an asylum, as well as of her paintings. As I read it, elements from both are juxtaposed in this prose poem in a manner which references the surrealism of her paintings.  Certainly the first stanza’s “I’m dreaming of a white horse. I talk to it by touching. My right eye peers over the hill, while my left spies a tiny she-hyena” is all there in an early self-portrait.

… a poem about an artist, a poem about a deer. Flicking back and forth: poems about film, quite a few word-game and list poems, Atropos, Japanese screens, exercise, Barthes, music bands – an eclectic mix

I very much like the idea of the sequence of five poems based on camera angles / shifts in a film: deep fake, rush fade, tilt shift, whip pan, smash cut. Though here, too, I suspect readers familiar with the film of ‘The Deerhunter’, whose actors feature, may find them more interesting than would non-film-buffs.

while ‘The Unbearable Lightness of Being’ kicks off with “The Uncivil Likelihood of Bell ringers” and “The Unctuous Limestone of Belt” followed by “The Underdeveloped Lineage of Berber”. (Spot the systematic alphabetic progression within those changes?) The poem ‘Band Aid’ lists bands like this: “My minds? Simple. / My heads? Talking. / My lips? Flaming” and on down to “My dead? Grateful”. Roland Barthes is plundered systematically for a sonnet, and directions for exercising in an aeroplane are transformed by inserting the word ‘poem’ in place of a body part. (“Rotate your poem counterclockwise at the ankles”). While all these poems are cleverly done – and fun – they strike me as pieces unlikely to sustain longer term interest: they remain about their processes.

The blurb on the back cover, however, describes the pamphlet quite differently. It reads:

Dreams and play are central to the possibilities of how language can transform grief into an aesthetic object to be handled and contemplated in the wake of bereavement … the sheer inventiveness and level of risk-taking in Dream into Play is startling. The rich intertextuality that he melds into transformational poetry is a way of bearing the unbearable… In an ironically exhilarating exploration of loss, these poems give back what has been taken through exceptional creative force.

So to start with the sonnet that opens the book: ‘The Green Capitals’ grieves as it remembers the poet’s mother, a grief in which “the heart / insists on its tick and pulse // […] like her words / echoing in the room / that everyone carries with them.” This is followed by a sonnet for his father’s 80th birthday, before we come to a poem that is an example “of how language can transform grief” through play.

I wonder whether here there might be a little of what Dennis O’Driscoll named ‘blurbonic plague’?

Playing with the two nouns ‘mother’ and ‘tears,’ Richard Skinner gathers routine phrases which use those words, and then swaps them around. For example: “Blood, sweat and tears” becomes “Blood, sweat and mother”; “Your mother should know” becomes “Your tears should know”.  Perhaps this last phrase becomes a newly telling one? I wonder, though about the phrase that becomes the poem’s title: ‘Crocodile Mother’. Is this, too, a telling phrase, one which has allowed in a negative sense of mothering? This is the poem the blurb must refer to as transforming grief; I don’t find others further the theme. The poem which follows this is ‘Atropos’, who speaks of her work as a Fate cutting off lives, before the various other themes and forms come in from all directions.

I wonder whether here there might be a little of what (in an essay for The Dark Horse some years ago) Dennis O’Driscoll named ‘blurbonic plague’? Or is the blurb writer bringing in personal knowledge the writing doesn’t offer to an ordinary reader – or is the blurb really referring to that first couple of poems? Or am I just missing so much, still with my first response to this pamphlet: ‘eclectic’.

Jane Routh has published four poetry collections and a prose book, Falling into Place (about rural north Lancashire) with Smith|Doorstop. Circumnavigation (2002) was shortlisted for the Forward prize for Best First Collection, Teach Yourself Mapmaking (2006) was a Poetry Book Society recommendation and she has won the Cardiff International and the Strokestown International Poetry Competitions. Jane Routh’s latest book is Listening to the Night (2018) and a new pamphlet, After, is available from Wayleave Press (2021) 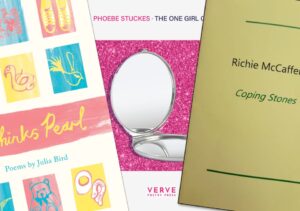