Sophie Buchaillard talks about developing the Writers on Reading podcast with author Jonathan Macho, how poetry can be a real conversation between writer and reader about the emotional topics of our day, and about the future of Welsh poetry

It was January 2020 when Jonathan and I first talked about sharing our love of books on a local community radio. We had met doing an MA in Creative Writing, and despite the fact neither of us had any radio experience, we decided to follow the advice that had been hammered by all the guest authors on the course and to grasp the opportunity as it presented itself.

We drafted a proposal on a Wednesday afternoon, huddled at a table in the recently refurbished university cafeteria, contemplating the students around us. Many were budding writers, talented poets, and innovative screenwriters. Few would achieve publication. Studying Creative Writing in Wales, we were acutely aware of our relative distance to London, and the over-representation of a handful of London-based authors on the shelves of the local bookshops. For many, the route to publication would involve small independent houses, and long and winding road to gaining minimal visibility. As novelists, we knew of a handful of well-established, independent, Welsh houses, that published both fiction and poetry. We framed our proposal around giving local authors a platform, pressed send, and forgot about it.

Three months passed. The news of a lockdown filled every mouth, every ear, every household. Within a few days, the university had shut its doors, our course moved online, and all the small routines of our lives been placed on indefinite leave. I had just finished a manuscript and was preparing to query agents and publishers. Everywhere, publishing houses closed to new submissions, new releases were delayed, and literary festivals cancelled.

A few weeks in, I was experiencing a creeping numbness at the thought doors appeared to be firmly shut. A few publishers indulged my questions, explaining that they were managing the uncertainty by consolidating around authors they had previously published. It felt a rotten time to be an emerging author.

For two years, the authors we interviewed were a voice in the dark. We read them all, interviewed most, never met any

Then, a grappling hook landed in my mailbox. The community radio had liked our proposal. Could we start immediately? They could point us towards the right equipment, the right software, talk us through home recording. I forwarded the email to Jonathan. Twenty What’s App messages, two headphones and a microphone later, and Writers on Reading was born.

For the next two years, we operated remotely – one from Penarth, the other from Cardiff. We met on Zoom to plan our show; recorded interviews using a digital studio; took it in turn to edit each episode; and broadcasted weekly. For two years, the authors we interviewed were a voice in the dark. We read them all, interviewed most, never met any.

Over the course of more than fifty episodes, Writers on Reading gave a voice to a virtual community of local publishers, authors and poets rendered less visible by the lockdown. This taught us a lot about a sector pulled in all directions by a sudden surge in digital demand, a need to diversify authors whilst consolidating stocks, to promote lockdown releases amongst the myriad of free webinars and online festivals that had sprouted all over the internet. We understood the role the Welsh Book Council had traditionally played in helping independent publishers cover the cost of marketing, whilst Literary Wales was re-directing its monies to create a series of emergency pots for those whose income from speaking events had all but evaporated overnight. Most of all, we learnt of the challenges faced by poets, walking an imaginary line between innovative potential and rigid expectations.

Around that time, I started taking socially distanced walks with an established poet, friend, and neighbour I had reconnected with through social media. I had hoped she could explain how one became a poet. Using her own experience, she talked about the importance of showcasing the writing at poetry readings, of publishing individual poems in (digital) magazines, most of which could not offer payment.

From speaking to a number of poet friends, the journey to publication seemed to be more arduous than for fiction. I had come across a myriad of small publishing labels dedicated to poetry by browsing online, but few seemed to translate into collections that could be found on the shelf of local bookshops. My friend confirmed that she herself ran two such publications, from her kitchen table she added. In between two other jobs, the work required that she received and reviewed submissions, edit and sometimes designed covers, typeset, and printed the work, which she then promoted and sold through a bespoke website. There is no money in it, she concluded. Small publications exist purely for the love of the craft.

Most of all, I was struck by the raw humanity of all the pieces we read, and how relatable were their themes

Poetry thus seemed a particularly thankless pursuit and I admit to having had many preconceptions about its modern relevance, as someone raised on Baudelaire and Verlaine who could count on one hand the names of contemporary poets I had read. Writers on Reading presented an opportunity to immerse ourselves. As a novelist, interviewing poets was like stepping into a foreign country. I was staggered by the many sounds and smells, the textures, the emotions. Most of all, I was struck by the raw humanity of all the pieces we read, and how relatable were their themes.

My journey into contemporary Welsh poetry started with Christina Thatcher (How to Carry Fire, Parthian) and Susie Wild (Windfalls, Parthian), two women who write about grief, pain, transformation; using modern forms to unsettle, a strong voice to reveal deep vulnerabilities. In those first weeks before Covid became a noun, reading Thatcher and Wild proved cathartic, like lifting a leaded curtain.

Not long after, Jonathan and I received a copy of the inspirational Inhale/Exile (Seren) by Cardiff poet Abeer Ameer. Her many tales of resilience in the face of political upheaval, violence and forced exile found new resonance amongst reports of police violence captured on camera; whilst her chiselled words brought perspective to the restrictions we were facing at the time.

As parents became teachers and teachers became digital experts, we reviewed Daydreams and Jellybeans (Firefly) by Alex Wharton, a poetry collection for children; semi-treasure trove, semi-comfort blanket, so filled with smiles I’d recommend carrying a copy wherever you go. Together with Daydreams and Jellybeans, Auscultation (Seren), by veterinarian-poet Isle Pedler represented the biggest shift for me in term of what I believed modern poetry tackled. From bubbles, jam, and butterflies, to castrating calves and shearing sheds, nothing was out of bounds. The compact forms allowed uncomfortable subjects to be picked up and observed from every angle. In Auscultation, Pedler unveils her professional experience as a country vet with honesty and candour, whilst also sharing the emotional turmoil of becoming a stepmom with disarming compassion. Overall, the poetry was consistently human and relatable.

As Jonathan and I continued to record new episodes remotely, we became aware of a series of collaborative poetry collections, notably Troeon/Turnings (Seren), a bilingual collaboration between Philip Gross and Cyril Jones, beautifully illustrated by Valerie Coffin Price and The Wrong Side of the Looking Glass (Black Rabbit Press) by Mari Ellis Dunning and Natalie Ann Holborow. Philip Gross and Cyril Jones described to us their collection as a work of trans-conversation, underlining the creative back-and-forth that took place between their respective pieces, the collection acting as an echo-chamber that built on the different poetic forms present in Welsh and English to portray the landscape, and especially the flow of our much-loved rivers.

I started to apprehend poetry not as a static form on the page, but as a real conversation with a reader / listener about the emotional topics of our day

Similarly, Mari Ellis Dunning and Natalie Ann Holborow spoke of that creative numbness they, and many authors we interviewed, had felt early in the lockdown, adding that despite publishers being reluctant to take on collaborative poetry collections, they had found the experience incredibly beneficial. Revisiting female characters from myths, folklore, and modern cinema in the manner of Angela Carter’s Book of Fairy Tales, they described how each of their practice was influenced by the other, such that the collection contained new distinct voices in conversation.

That is when I started to apprehend poetry not as a static form on the page, but as a real conversation with a reader / listener about the emotional topics of our day. This was reinforced by the recent collection 100 Poems to Save the Earth (Seren) edited by Zoë Brigley and Kristian Evans, in which one hundred poets from around the world shared in a global state of the environment, not in a militant way, but as a global meditation on where we stand. Poetry as a space for reflection.

We invited the poets on our show to recommend other works that spoke to them in recent months. These included collections by Zeina Hashem Beck (To Live in Autumn, The Backwaters Press) who writes of the city of Beirut with love and compassion; Roy McFarlane (The Healing Next Time, Nine Arches Press) and Roger Robinson (A Portable Paradise, Peepal Tree) who voice collective anger in response to discrimination; Raymond Antrobus (The Perseverance, Penned in the Margins) on the spaces in between communities, and Alison Binney (Other Women’s Kitchens, Seren) about coming out in 21st century Britain.

Looking ahead, the Welsh poetry landscape is an exciting space that invites new contemporary voices to emerge, play with form in innovative ways, collaborate with a plethora of diverse perspectives, and translate the big topics of our time into fragments, small enough to hold. As for Writers on Reading, we continue as a podcast, grateful to be able to contribute to those transconversations, humbled by all that we learnt along the way.

Sophie Buchaillard was born in Paris and lived in Bordeaux, Salamanca, Merrill (NY) and London, settling in South Wales in 2001, almost by accident. Her short stories and essays have appeared in Wales Arts Review, Murmurations Magazine, the Other Side of Hope and Square Wheel Press. She co-hosts the Writers on Reading podcast with author Jonathan Macho, and tutors in creative writing. Her debut novel This Is Not Who We Are (Seren Books) is out in June 2022. Sophie Buchaillard’s website is here. 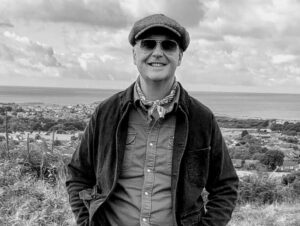 We have to find the right authors and the right commercial strategy to recover. It may take us five years