Greta Stoddart chooses poems by Elizabeth Bishop, Raymond Carver and Czeslaw Milosz for her desert island stay — all poems that lead to moments of enlightenment that are as unsettling as they are clarifying

As I consider this trio of poems I’m aware of something that connects them beyond the clarity and effortless telling: a revelatory experience, a moment when a certain degree of consciousness arises out of intense emotion, a sudden powerful confluence of observation and feeling which brings the speaker to a greater awareness of … of what? Maybe nothing less than what it means — what it is — to live as a human being on this planet.

I get goosebumps rarely these days but usually — unnervingly — at quite sentimental things: an advert, a moment in a film, some poems. I feel my emotions rush to the surface — my body’s tiny hairs rise up. When I read these poems though, something deeper happens, below skin level. It’s as if my understanding (such as it is) happens neither in my brain nor my heart but somewhere between the two, or somewhere else in my body, somewhere I don’t know about. Perhaps, heaven forbid, in my soul.

My first poem is ‘In the Waiting Room’ by Elizabeth Bishop. I can’t remember when I first read it. But I do remember feeling: here are words that are trying to describe an experience that is, essentially, beyond language. How does it do it?

Those short, almost delicate, lines are so inviting to me. There’s a lightness. Yet the poem is long, broken up into five irregular stanzas. It looks like a long dive, or a series of plunges that go deep, and deeper still. But first, straightaway, I’m in a real place: Worcester, Massachusetts; then, more precisely, in a dentists’ waiting room. I know exactly where I am, and why: my aunt has an appointment. I love the simple language: “It was winter. It got dark / early.” The room is “full of grown-ups”, says the child, looking shyly around before opening the pages of a National Geographic magazine where she’s confronted with an array of pictures from around the globe: volcanoes, explorers, distant lands, indigenous women whose “breasts (are) horrifying”.

The child is fascinated, appalled, by these images, feeling her separateness, yet at some level deep inside knowing she is — or will be — part of this; that they, like her, are human, living out their lives on this very same planet. And so the dive starts … the falling …

I think what makes this poem so significant is that a lot of us may have experienced similar moments, especially at a young age, when our consciousness appears to merge with our subconscious — is that what revelation is? — resetting our sense of ourselves in the world

“I read it right through. I was too shy to stop”. I love that. The child’s introversion compels her to sit and absorb this shocking material, forcing her to confront the great complicated breadth of humanity. She is engulfed in a vertiginous moment of existential realisation. She tries to hold onto what she knows — her birthday, her age — to stop herself from “falling off / the round, turning world / into cold blue-black space”, before feeling: “But … you are an I, you are an Elizabeth, / you are one of them. / Why should you be one, too?” (reminding me of Emily Dickinson’s “I’m Nobody! Who are you? / Are you – Nobody – too?”)

“I scarcely dared to look / to see what it was I was”; the child looks round at the grown-ups as if they might confirm her inclusion in this strange species, a truth she feels compelled to resist because up to now she had not been of them, she had been this other, freer self — a child — but now, in an emerging, tangled sense of self-awareness, she realises she is part of a vast, common humanity, and that:

This baffling epiphany is followed by a suddenly expansive movement of the child’s mind (the poem is full of these great swerves of thought, these deeper drops in the dive) as she asks what “held us all together or made us all just one?” as from a piercing awareness of self comes a sense of all selves. Then a “big black wave” like a huge panic attack from the depths of consciousness threatens to overwhelm her but instead brings her back to the waiting room, to everyday life, to external, observable realities. And, unbelievably given the disorientating experience she’s just endured, to the same place, the same day.

I think what makes this poem so significant is that a lot of us may have experienced similar moments, especially at a young age, when our consciousness appears to merge with our subconscious — is that what revelation is? — resetting our sense of ourselves in the world.

‘Happiness’ by Raymond Carver also describes — with less psychic drama — an epiphanic moment that seems to take place in the body somewhere between the heart and the mind; outside time, or an eternal moment in the flow of time. A block of a poem, also with short inviting lines, perhaps suggesting deft shifts and leaps of thought.

Again, I don’t remember when or how I came across this poem. Like the other two, it exists in a kind of timelessness of its own making. (There is one poem, however, that I remember vividly reading for the first time: Auden’s ‘Musee des Beaux Arts’, for A level English. I hadn’t realised a poem could be like that, direct and conversational while at the same time showing — and telling — us something fundamental about humanity.)

‘Happiness’ by Raymond Carver also describes — with less psychic drama — an epiphanic moment that seems to take place in the body somewhere between the heart and the mind; outside time, or an eternal moment in the flow of time

Once again we’re right there from the start: sun up, coffee and “that usual early morning stuff / that passes for thought”. The mind open, relaxed, no “irritable reaching for fact and reason” (Keats), just looking out the window where two boys are walking past on their paper round, a pair “so happy they aren’t saying anything”, a silence, an awareness outside language. Carver suggests a potential gesture: “I think if they could, they would take / each other’s arm”. So much is suggested in that “if they could” about love, society, our neurotic entrapments (I sometimes misread those lines as “if they could, they would take / each other in their arms”).

They are doing ‘this thing’ together — what is ‘this thing’? I love the vague exactness of it — does it even have a name? And then a panning out to the air above the very planet on which this seemingly insignificant thing is happening: “the sky is taking on light”. The beauty of the sky and the moon and ‘this thing’ between the boys dispel for a moment all thoughts of “death, ambition, even love” (conjuring up “Till Love and Fame to nothingness does sink”).

Ah … then the word comes to him. Happiness. It’s as simple — and inexplicable — as that; the way it “comes on”, then “goes beyond” — a sudden wonderful swoop up towards the transcendent, going beyond “any early morning talk”, in other words beyond language, beyond the very poem you’re reading. Such a great example of Robert Frost’s idea of the arc of a poem moving “from delight to wisdom”.

Sometime poems have echoes of other poems. As well as Keats’ ‘When I have fears that I may cease to be’ I feel this poem pulls into its orbit Heaney’s ‘A Guttural Muse’ where an old man looks down from his window at the young folk gathered there, “wanting to swim in touch with soft-mouthed life.”

My final poem is ‘Encounter’ by Czeslaw Milosz. One of those small perfect poems that seem to hold a mystery I never tire of returning to. It’s a poem trying to express what cannot be said, the beauty being in the trying.

‘Encounter’ by Czeslaw Milosz is up on the wall by my desk, I return to it again and again as the losses accrue

Again, at the start, a clear image — I realise how drawn I am to this kind of scene-setting! Frozen fields, a wagon, dawn. An archetypal, cinematic, image. A timelessness about it from the off. A hare leaps out — image, symbol, portent. Then a hand pointing it out. Look. Look at that thing, that thing running across our path. Then the sudden enormous swerve (I’m fond of big swerves, too) in time and space with that beautiful, subtly resigned, “That was a long time ago.” That small moment so vividly, eternally etched on the mind now exists only there. In that time long ago. Both hare and man are dead. All we have left is the gesture, contained within the gesture of the poem.

Then the initial work of laying down the images, held, almost restrained, by the couplets gives way to a final tercet, allowing the sudden swell of emotion, which breaks into the essential question: “O my love, where are they, where are they going”, which seems to suggest that even though man and hare are dead and gone they are still somehow alive and ‘going’ somewhere.

The question contains another: Where are we going?’, which leads to the heartbreaking (or possibly heart-restoring) refusal to mourn; maybe it’s all part of the ’wonder’ of life. The poem allows us the possibility to think about the passing of time, and all the loss that that movement sweeps up in its wake, as not necessarily cause for great sadness, if only we would look at it differently.

This poem is up on the wall by my desk, I return to it again and again as the losses accrue. But all three poems are ones I’d want to keep saying to myself as they remind me, even while alone on my desert island, how, with a certain quality of attention, even our most mundane or simple observations can reveal sudden depths that might help us carry on living with what feels like greater understanding.

The book I’d take? Probably Emily Dickinsons’s Collected Poems because I don’t think I’d ever tire of that great lucidity and mystery.

Read ‘In the Waiting Room’ by Elizabeth Bishop on poets.org

Read ‘Happiness’ by Raymond Carver on the Poetry Foundation

Read ‘Encounter’ by Czeslaw Milosz on the Poetry Foundation 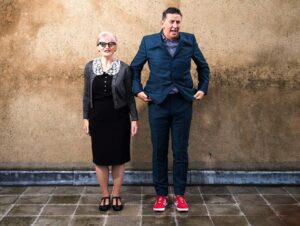 And lo! the people came

Feature: Hosts Helen Ivory and Martin Figura tell us about the Live at the Butchery Zoom readings