Poets have always responded to war by writing poetry — it’s what we do. Following the invasion of Ukraine by Russia on 24th February this year people started sending The Friday Poem their poems about the war — poems about resistance, poems of protest, and poems about specific individuals affected by the fighting. These are stories of courage, grief and hope. We have decided to publish some every week. Slava Ukraini!

The war in Ukraine came just in time because
my guys the Marauders weren’t chosen for March Madness
and ever since the Super Bowl I have definitely been
needing a jolt and feeling kind of bored
and then, perfect, there’s this war and it’s Putin vs. Zelensky
and I definitely have Zelensky in my bracket
and right away I posted a selfie in my new Zelensky t-shirt
with half my face painted gold and the other half blue
and it got so many “likes” that I decided to wear that shirt to the gym
which also was good timing because
my Marauders shirt was getting kind of smelly anyway
and everybody was asking me where you get one and isn’t Mr. Ze cool
except for one grumpy old dude
who kept trying to tell me some complicated shit about how
part of Ukraine is near Europe and part of it is near Russia
and even a lot of the people there are divided about what they want
and how this shit has been going on for years
and how all these big companies want Ukraine’s lithium and titanium
and a bunch of other minerals I didn’t even recognize
and how did I think this would end in any way that leads to peace
and finally I had to tell this guy that I’ve got to do my stretching
but it’s been nice talking to you
and while I was stretching I was thinking that since Covid is over
I was going to have a March Madness party and
everybody would compare brackets
but now I think I’ll have a Putin vs. Zelensky theme party
and ask everybody to dress up as
a Russian devil or a Ukrainian super hero
and then we’ll have an arm wrestling contest
and we’ll see which team wins which should be fun
but I should probably do it this weekend before the war ends
or people start going on spring vacation…

Find out more about Matt Witt

Any comment from me on this latest war feels inadequate. My words feel too small, incapable of expressing anything in the face of such violence, terror and horror.

I was lucky to visit Ukraine in 1993, to drive up from Romania on a road trip that took in Kyiv, Lviv and lots of smaller conurbations. We ate simply, met locals, drank vodka, saw ex-Soviet warplanes on plinths and elderly women in headscarves driving oxen-pulled carts. We travelled large distances every day for two weeks, some of it over vast open Ukrainian plains on our way back to England via Poland, Germany and Holland.

It is particularly disturbing to recognise places I visited on the news, although of course this shock of recognition is nothing in comparison to that of the journalist I saw on television who was shown live footage of a shelled building that had been her family home.

Sadly, it seems, poems about war never go out of date. The title of the piece below is meant ironically; who would want to remember the worst that humans can do to each other when far away from them? It is offered as a simple tribute to, and reminder of, some of the poems I know  where, despite the often seemingly unspeakable subject matter, the poet has been able to find words to explore some of the complexities and simplicities of war.

I’d like to take Les Murray’s ‘The Burning Truck’
for its velocity, the sense of the sudden, total loss
of safety, for its fighter planes that “came in off the sea
and didn’t rise” so fast “the crockery they shook down /
off my kitchen shelves was spinning in the air /
when they were gone.” And for the burning truck itself,
“canopy-frame a cage / torn by gorillas of flame,”
and the “wild boys of the street”, “disciples” who ran
after it, and “out of the world”. And Keith Douglas.
‘How to Kill’, or ‘Vergissmeinnicht’. Either of these,
for the grace with which they describe the antithesis
of grace. And Isaac Rosenberg, whose “droll rat”
at break of day, passes between the lines
to touch the hands of soldiers on both sides;
the rat who would be killed if “they knew”
of its “cosmopolitan sympathies”. And Owen;
probably ‘Futility,’ if I have to choose, for its
tenderness. And ‘The Colonel’, by Carolyn Forché,
which puts ice in veins. And ‘More Light!, More Light!’
by Anthony Hecht, which I would like to never
read again. And all of David Jones ‘In Parenthesis’.
And ‘The Foot’, by Don Paterson, a poem that begins
“I have no words so here are the no words”
which is what I have today.

Find out more about Roy Marshall 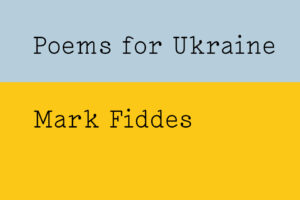 by Mark Fiddes — one of our Poems for Ukraine