Will lockdown poems have any lasting interest? I had decided not, opened John McCullough’s latest book at random and saw the line “A virus keeps half my friends off the streets”. No, I didn’t put the book down, being drawn in by the poem’s title, ‘Letter to Lee Harwood’. Its opening beguiles: “Dear Lee, forgive me. I need your gentleness” and this tender voice returns towards the end of the poem when the poet says “I keep imagining one face behind a mask will be you / and you’ll tug it down, tell me softly how you’re not // really dead […]”.

In twelve couplets, ‘Letter …’ is a fairly short poem, yet between those quiet lines I’ve quoted above, it manages to pack in environmental degradation, loneliness, consumerism, an elderly neighbour terrified of the virus, a good blast at the state of politics and what I’m sure will be quoted elsewhere too:

You’re right, I know: the past wasn’t golden.
It wasn’t even ormolu. History is the armchair

by the kerb that says TAKE ME I’M FREE!
but is too heavy to carry […]

The poems in Panic Response certainly don’t take you by the kerb for a quiet walk; like those in John McCullough’s previous book Reckless Paper Birds (which won the Hawthornden Prize) they engage you in hopscotch. Panic Response opens with ‘Glass Men’, a poem whose form I can best describe as comprising one-line end-stopped stanzas – sixteen apparently disparate statements, starting with some literal glass: “Brain tissue inside a man’s skull at Pompeii had turned to glass through heat.” Next comes a sidestep through “When my head is molten […]” before a hop to “A therapist suggests my overworking began as a way to please a disappointed father” and a quick back-flip away from the personal to “Charles VI of France believed he was made of glass”. On re-readings, you notice more than one line referring to his father slips in like an undercurrent between facts and musings. The poem uses glass as a way to frame the fragility of relations between men – a theme echoing ‘Tender Vessels’ in that last book.

I enjoy the way John McCullough takes forms apart and tries re-arranging them in new ways. Even an abecedarian poem is given a makeover …

Here, I enjoy the way John McCullough takes forms apart and tries re-arranging them in new ways. Even an abecedarian poem is given a makeover: none of the letters in the right order, starting with X and ending with O. Cicero gets in more than once, under C about half way through the poem, and then again under E with a quotation on “error”. Francis Bacon features in B, the tenth letter in this re-arranged alphabet, and gives the poem its title, ‘Flower of Sulphur’ by likening friendships “to the most painful remedies”. Yet behind the outrageously skittish surface of this poem lie discussions of friendship and the suicide of a friend characterised in T (for test): “You were the first friend to take a poetry course of mine. I thought, This will be a test for me.” The final letter in this re-arranged alphabet also addresses the friend:

O     The order of the alphabet is arbitrary, you said. Why not start at X?

So you start again at X, beginning to see the role M (for the ‘Bag of Mysterious Objects’) has in the poem in its all-at-onceness of thoughts about a dead friend and the nature of friendship. Or of course you can also flip back and forth across the pages to build the poem into a more linear narrative order. (Other readers must have appreciated this too: this poem was short-listed for last year’s Forward Prize for best poem.)

The book closes with ‘Crown Shyness’, a love poem ‘for Morgan’, written from a place where panics have given way to tenderness. There’s a particularly telling passage, looking back to “an early date” when “I gifted you all / my favourite facts—the five noses of an ant, // how nobody knows who named the Earth. / How the way treetops avoid touching / each other is called crown shyness” which reveals John McCullough to be an avid collector of facts. Some remain just facts, but others (that ‘crown shyness’) take on more significance. And I enjoy the way in this book his poems have expanded to allow in his wider reading – his PhD topic, for example, was on the Rhetoric of friendship in Renaissance writing 1579-1625 – and he even references himself as R (for routine) in ‘Flower of Sulphur’.

Essentially we’re offered a short book of 28 poems which a different publisher might have offered as a pamphlet. But it has the advantage of a pamphlet, too – you can get your mind round it, and return to it

Of course I’m cherry-picking here among the poems that I’ve most enjoyed, but I should say there are also more straightforward poems which celebrate the enthusiasm of a chemistry teacher, or the colouring of luminescent plankton, or even the goldlessness of his home town. (He teaches creative writing at the University of Brighton.) You can hear him read in a couple of videos on his website here (without text though, you won’t see how poems work and move across the page).

Penned in the Margins seems to print in a larger font than most publishers and, with generous headers, the poems have a very spacious setting that gives them the air they need. The poem ‘Letter to Lee Harwood’ I mentioned at the beginning has only 24 lines yet is spread over a page and a half. Essentially we’re offered a short book of 28 poems which a different publisher might have offered as a pamphlet. But it has the advantage of a pamphlet, too – you can get your mind round it, and return to it.

Jane Routh has published four poetry collections and a prose book, Falling into Place (about rural north Lancashire) with Smith|Doorstop. Circumnavigation (2002) was shortlisted for the Forward prize for Best First Collection, Teach Yourself Mapmaking (2006) was a Poetry Book Society recommendation and she has won the Cardiff International and the Strokestown International Poetry Competitions. Jane Routh’s latest book is Listening to the Night (2018) and a new pamphlet, After (Wayleave Press, 2021), is available here. 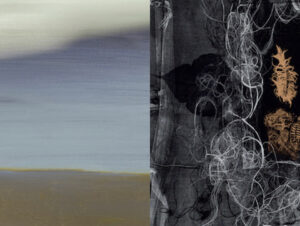