Long-standing fans of Peter Sansom’s poetry will not be surprised to hear that this, his sixth collection and first since 2015’s Careful What You Wish For, is chocker with poems addressing people — especially family — and place. Careful left off with as ambitious a poem as any in Sansom’s oeuvre: ‘Sofa’, a 155-line, rolling miscellany of memories and references remains, on re-reading, as moving as it is detailed. How could Sansom follow that?

Opener ‘King’s Mill’, a three-part exploration of Sansom’s Nottinghamshire roots, unfolds like the map which triggers it. Here is Sansom’s distinctively conversational syntax:

That other King’s Mill, the hospital, is marked here too.

They all lived here in time, another brother
though only briefly, quite suddenly dying
of pneumonia, the old man’s friend — when I arrived,
breathless, the cousin I asked which ward
told me with a smile the morgue, and I never thought
to hit him till now, and still don’t really,
dead these days as he is too.

Long-suppressed anger morphs into characteristic deadpan humour, a difficult trick to accomplish without appearing trite — while he’s no formalist, Sansom is as highly-skilled as any contemporary poet; as evidenced too by the spaced alliteration of ‘brother’, ‘briefly’ and ‘breathless’ and the assonance between ‘ward’ and ‘morgue’. The poem’s final section contains Sansom’s manifesto:

I look and it’s all here. The M1 runs out South
to the big noise, the road to somebody’s success,
and North in time for us to the M18
and happy Cleethorpes, the kids just as they were.

Family life and love, far from London’s glare, trumps all. Sansom underlines that sentiment in ‘Twice Round Me’, recalling his own lineage: “That generation who never learned to drive / stayed put or only moved in walking distance.”

Long-suppressed anger morphs into characteristic deadpan humour, a difficult trick to accomplish without appearing trite — while he’s no formalist, Sansom is as highly-skilled as any contemporary poet

‘Brian’, about another of his brothers, packs a conspicuous emotional punch, mixing a recounting of painful events with Sansom-as-narrator’s thoughts:

I drove thirty virtuous miles
with the dozen years of our growing up,
to say I’m here and sit with him in the dayroom
once a week for a month, though he was there
longer.

This jumbled use of time- and distance-units foreshadows Brian’s ECT:

What do I know?
His sister thought it would work, they had to
try something. And as she pointed out later,
‘cheaper than drugs, cheaper than talk’

Lala, calm
behind (inside) a Peppa Pig stickerbook,
a year from being able to read, and Sisi
the big sister looking on, sideways,
just about to comment. The cavern
of a car holds them in their baby seats.
I could cry looking at them.

A similar tenderness dominates several poems about friendship, especially ‘Barbara and Derek, Derek and Barbara’:[1]With its litany of names and jolly incidents, it is perhaps inspired by the song ‘Friends of Mine’ on The Zombies’ classic 1967 album Odessey and Oracle.

Night was all talk,
Blue-jean Derek, Jean-Paul Derek, nervy
Gitanes fingers, Blue Oyster Cult sweatshirt
and John Berryman beard. And Barbara
like an aunt, brilliant in a travel-ironed blouse
with plenty that she didn’t need to say.

The rosy memories are undercut by a poignant thought:

I never thanked you, but I thank you now,
a decade too late, Barbara and Derek,
Derek and Barbara and Dinah the dog.

Lanyard includes more overt elegies; for poets — ‘Gerard Benson’ (“Your Barrow Poets’ single / topped the Australian charts”) and ‘Poetry Society’ (for Sarah Maguire: “So many spoke / because of you”, a line that could equally apply to Sansom, and to Ann, his wife, for how they inspire poets, of all ages, to write their best poems) — and family, as in ‘Phone Call’:

[A]nd then there’s Auntie Tad
and Auntie Olive too who loved me
so much I still have the birthday mug
You’re The Cream In My Coffee
with a stave to sing in your head
when you made a drink.

The positioning of ‘so much’ exemplifies how cleverly Sansom uses enjambment to create different emphases, enabling a perfect balance between sadness at the individuals’ absence and the warm glow of their memory.

Peter Sansom’s poetry … is full of gentle, bittersweet and funny moments, the work of a poet and person whose outlook on life is immensely engaging, engaged and likeable

The list of cherished places which Sansom has commemorated throughout his career is long, and Lanyard adds to it: Ullswater, Halifax, Whitby, previously celebrated in 1994’s January, (“Another time just then and there / a nice American asked which / was Dracula’s grave”), and Notts. again, in one of the highlights, ‘Alfreton and Mansfield Parkway, June Evening’, in which Sansom quite marvellously distils what he observes:

Three drunk women are fighting
on the Nottingham platform,
in the same pair of glasses, owls
out on the town. They could be

my sisters. A train comes in
and they stop like actors
between scenes. On they get,
off they go.

Once more, creative use of enjambment is notable, and prefigures the poem’s melancholy conclusion. Similarities to ‘Adlestrop’ — the quatrain form, the rural railway platform backdrop, the same month, and the contrast between Thomas’s “No one left and no one came” and Sansom’s “On they get, / off they go” — may be coincidental, but I suspect not.

‘Darter’ is another of Sansom’s fine sport poems;[2]See, e.g., ‘Anyone for Tennis?’, ‘Cross Country’ and ‘July Football at Abbeyfield Park’ from The Last Place on Earth (Carcanet, 2006) and ‘Tennis in London’ and ‘The Caddy’ from … Continue reading as ‘darty’ a poem about darts as one could imagine:

Hour after hour with the same three darts
thrown the same Zen way, week-in week-out
for the idea of a nine-dart checkout.

The title-poem closes the collection. On Radio 3’s Free Thinking Sansom recently referred to the lanyard which teachers wear as ‘a happy noose’. That sense is transmitted by how Sansom sees knowledge, however fleetingly, being absorbed:

The lanyard meanwhile is a badge of office.
You put your head in like taking a medal
perhaps even the gold, ok, not the gold,
but you were there, fifteen minutes, long enough
it transpires to look up, coming round to a sea
of careful faces, listening to the music.

Prize-judges and newcomers to Peter Sansom’s poetry might feel it’s insufficiently metropolitan or on-trend, but they would be missing out, because his output is full of gentle, bittersweet and funny moments, the work of a poet and person whose outlook on life is immensely engaging, engaged and likeable. 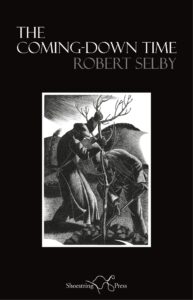 An England both fertile and funereal