An England both fertile and funereal

Reading Robert Selby’s fine and assured first collection reminds me of Bruce Chatwin’s (tellingly French) phrase for England: ‘le tombeau vert’ (the green tomb). For Chatwin, this meant a beautiful but restrictive and backwards-looking realm, both fertile and funereal at the same time. Selby’s vision of England is one profoundly steeped in the horrors of the past, of rural communities devastated and scarred by World Wars One and Two. This is one of Selby’s definitions of ‘the coming-down time’, the loss of innocence in bucolic life and how descendants of these people make peace with that (or not). These are poems that evoke Pevsner’s guides to the historic buildings of England in their concern for the technical, architectural language of appreciating the edifices of our forebears. There is a decidedly Arcadian feel to the collection, filled as it is with elegies for not only those lost in the war but local characters and, crucially, the poet’s grandparents. This idea of the past and present co-existing in the mind of the poet is more than hinted at by the striking cover image (a woodcut by Claire Leighton) of two men planting a sapling. This captures the essence of these poems – the desire to celebrate the past but also negotiate ways in which to live in the present and future while also doing justice to what has come before. To be a responsible citizen is to be aware of the past and to be vigilant for it repeating itself.

A poem might plant ideas in the head of the reader and flourish at some point in the future, a secular form of ‘prevenient grace’.

Many of the poems pivot on the contrast between a modern city reality where people commute to work and their ancestors who had archaic trades like ‘wheelwright, ostler, / coachman, horseman’ (‘In God’s Prevenient Grace’). There is a sense of guilt and betrayal at leaving behind the old ways of life and everything is coloured by the past:

In the arboretum, under palms gifted
by diplomats at dim-distant summits
grown gaunt now with uncongenial climes

There is a focus on husbandry, on people looking after the land, and poetry, as practiced by Selby, can be seen as a substitute for this, that a poem might plant ideas in the head of the reader and flourish at some point in the future, a secular form of ‘prevenient grace’. Poetry is also a way of remembering things that might otherwise be forgotten, and anamnesis is a recurring theme in this collection: ‘How easily people forget things’ in ‘The Winter Wood’. This idea of poetry guarding against the capitalist depredations of the present and against fallible human memory is particularly necessary when thinking about the glossing effect of gentrification. In ‘The Firecrests’ ‘even here has a coffee franchise’ and the poem ‘Wild Cherry’ is a paean to the love of trees and their protection against the standard council practice of felling everything with leaves:

No, we couldn’t let that tree fall, and didn’t.
We hear others succumb to chainsaws

across the way, make room for parking,
and the surgeons over-employed each winter
husband for a neatness we call meddling.

Anything that might celebrate Englishness is likely to be held at a leery or sceptical distance but these poems are not idly jingoistic, they in fact suggest that the idea of the ‘centre’, of city versus country, is a harmful and polarising one. In the opening poem of the sequence ‘Chevening’ we are told that the centre is only reached by entering a maze. In ‘Orford’ the men are proud to tell the visiting King George II that they are ‘Orford Men, and that’s enough’. The closing poem of the collection, ‘XII’ from ‘Chevening’ is enough to show that the speaker of these poems loves the place in which he was raised but is far from considering it the cynosure of the earth, as he tries to convince his (presumably Canadian) girlfriend to stay:

Yes, England did all it could.
All of it becomes propaganda with an airmail stamp.
All of it evocable at a whiff of buddleia.
It wreathed the dead, straightened the steeple,
placed the fielders, re-glazed the red phone box.
Now I must wait for the needle
of your heart’s compass to unspin,
and see where it stops.

This is the closing stanza of The Coming-Down Time and it brilliantly captures a sense of angst and euphoria at the same time, ending at it does in media res. Belonging as such relates not to place, although ancestral roots are important, but rather to two people in love finding their place in the world.

These poems are not idly jingoistic, they in fact suggest that the idea of the ‘centre’, of city versus country, is a harmful and polarising one

The collection is structured as three complementary sequences, beginning with a poetic narrativization of the life of the poet’s grandparents who anchor the speaker to a locality and when they die they leave a family photo ‘with two members un-there’ (‘The Daylight’). The sequence ‘Shadows on the Barley’ expands its gaze further afield, and the crowning glory of the collection, ‘Chevening’, is a series of love poems attempting to convince a lover to stay in England. As one half of a transnational couple, I found this closing section especially poignant. The primacy of place is such a contentious subject and the desire to belong is extremely strong. But Selby has the intelligence to realise that nationalism is a distraction, that love transcends the atlas and all of its boundaries and check-points. England’s past and present exists, tangible as shown by the stone effigies and tombs in a church that the speaker’s lover touches. What the speaker says is ambiguous, it could mean that England soars above everything or that it has no future at all other than the personal and private futures of its citizens:

What did you expect your touch to find –
papier-mâché?
The tombs lie real as death’s day,
rearing in all our futures,
except England’s. 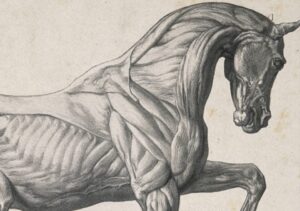 Book Review: Mat Riches reviews When I Think of my Body as a Horse by Wendy Pratt (Smith|Doorstop, 2021)