Judging a book by its cover

In which The Friday Poem editors Hilary Menos and Andy Brodie bemoan dull and confusing book and pamphlet covers and make a plea for brightness, legibility and a bit of funky design

Every Thursday night we put the following day’s Friday Poem front page together – the poem, the feature, the book review, the pamphlet review. It’s not always like this – sometimes we run two book reviews, sometimes we run two features, but mostly that’s the format. We press ‘Go’ and stand back to inspect, admire or – sometimes – weep inwardly. More than once we have had this conversation:

Why oh why oh why are so many poetry book covers … how can we say this … dull? To illustrate our features we often use a photograph of a poet, which is (usually) nice to see. Sometimes we make an image – Andy will construct a composite picture or find a stock photo and tweak it to suit. But to illustrate reviews we always use part of the book or pamphlet’s cover, usually with text removed. Sometimes we have a bright and grabby front page – three nice images working well together and making it look like an exciting and interesting webzine. Other times it’s all a bit … taupe.

Stuart Bartholomew, founder of the Verve Poetry Festival and Verve Poetry Press, says: “As a former bookseller I know how important it is that covers are enticing. I also work very hard on the spines on our books for similar reasons. Quite often if you are going to get a book into a chain bookseller it will be one copy and needs to fight to be noticed on cramped shelves … Brightness isn’t essential, but it helps.”

Why oh why oh why are so many poetry book covers … how can we say this … dull?

We know there will be people out there saying that what’s inside a book is more important than the cover. But most people do, in fact, judge books by their covers all the time. Everything about a book’s cover – the font, the images, the colours – tells us something about what we can expect to find, or not, inside it. A cover identifies a book, acts as an advertisement, establishes a feeling or mood for potential readers and communicates endorsement quotes and other selling points to potential buyers. We all have certain expectations and assumptions about a book, mostly based on its cover. Publishers, poets, ignore this at your peril.

We are all drawn to products that are eye-catching. The cover of a book works as a salesman to its audience, and the cover needs to be recognised as an important tool – not just to serve its original purpose, which is to protect and bind the pages of a book. The book cover’s purpose has evolved from protection to promotion, which highlights its importance to be designed well in order to fill its purpose – draw more readers in. A book cover is the book’s billboard, and it causes expectation. If a reader sees a book with an amateur cover, they’re going to believe that it’s also poorly written.

But what, actually, makes a great cover? It’s one that elicits a response of some sort. Not everyone has to love it. But it mustn’t be bland. These days there’s more pressure than ever to get covers right. Bookshops are a riot of colour and interest. You’re trying to get your face to stand out in the crowd, to make an impact. It’s not just in shops that books need to stand out, but online too, both on social media and on the sites people buy from.

These days there’s more pressure than ever to get covers right. Bookshops are a riot of colour and interest. You’re trying to get your face to stand out in the crowd, to make an impact.

Some poetry publishers have a recognisable brand – for example Faber’s plain colour cover with large coloured type. Some of these can be pretty – John Berryman’s orange and puce text on purple for his 77 Dream Songs, for example, or Richard Scott’s blue and red text on shocking pink for Soho – but some are pretty dull. Who knew there were so many beiges, browns and mustards, all of which struggle to be enlivened by even the brightest coloured text?

Many poets will say that focusing on the cover of a collection cheapens the poetry. They are probably the few who are happiest doing their poetry readings from sheaves of A4 notes in the back room of a pub with seven beardy blokes and a dog. Nothing against beards, or dogs but hey. If you buy someone a lovely present, it can’t hurt to wrap it up in a lovely box.

So what do we – as magazine editors trying to put together a poppy front page – weep over? Covers that try to look like jazz albums from the fifties with “cool” geometric designs. Covers that are mostly grey or beige or taupe. Covers whose title is in one of those curly fonts from a chocolate box you’d give your mother in law. And text which is hard to read over the cover picture. Come on publishers. Do better!

We tried to pick our top three favourite front covers from books we’ve featured on our front page, and it was pretty tough. In the end we whittled it down to these five:

Shelling Peas with my Grandmother in the Giorgiolands by Sarah Wimbush, published by Bloodaxe, is one of our favourite front covers. The picture is from ‘Shelling Peas’ by Irish artist Lucy Doyle. It’s vivid and vibrant and eye-catching. Doyle says: “Colour has always been my primary preoccupation and I started out wanting to use strong and emotionally stimulating colours in a rich and tactile way.”

Speechless at Inch by Jim Caruth, published by The Poetry Business, is another. The front cover features part of a photograph of ‘Straight and Narrow’, a painted wood figure by Janet Mullarney from the Irish Museum of Modern Art. We both found this image to be particularly beautiful, very different from other front covers, and very appropriate to the poetry in the collection.

We also like Fridge by Selima Hill, published by The Rialto. The cover of this pamphlet, designed by Nick Stone, is fabulous blue, with a simple line drawing of a fridge and a goose. There’s something about the way the two objects interact that speaks volumes. It’s simple but very effective.

And then there’s Crucifox by Geraldine Clarkson, published by Verve. See what we mean about Verve? The cover of this pamphlet clearly illustrates Stuart Bartholomew’s skill. It’s bright, colourful, modern and grabby, in the Verve festival colours of turquoise, pink, gold and navy. All the Verve publications are attractive and we could have mentioned more but this is our foxy favourite.

More recently we loved the cover of The Doll’s Hospital by Jenny Robb, published by Yaffle Press. This showed a broken doll’s head, with creamy skin, bright blue eyes and red lips, stark against a black background. It’s punchy, provocative, slightly weird, and illustrates the major themes of the collection perfectly. 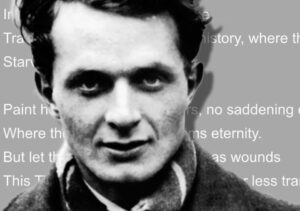 Essay: Chris Edgoose considers Stephen Spender, revolutionary poetry and the need for trust between writers and readers of poetry