What was found by a man walking his dog? Robert Etty’s poem describes a marvellous collection of finds ranging from the mundane to the macabre, from the unlikely to the unbelievable, from the surreal to the stuff of science fiction. We like the conversational tone, the flights of imagination, and the way the poem gently homes in on finds, and losses, of a  more serious nature. We think it’s a beautiful poem — assured, entertaining and poignant.

Found by a man who was walking his dog

It wasn’t the only thing he’s found: bones
(not surprisingly), fully fleshed bodies
and single limbs, bombs, mines, meteorites,
sausages with new nails inside them,
a polished, loaded AR-15,
a Bristol Beaufighter on Cleethorpes beach,
sailback reptiles’ fossilised rib cages,
messages in and out of bottles, some
alligators and, once, a World Cup.
He finds them all, the man with his dog.
They share a nose for hiding places
and a weakness for trotting the globe.
He found £60,000 on a wander
beside South Drove Drain, Spalding, Lincolnshire
and cans of coins worth $10m
in shallow holes in California.
The Moth Girl discovery startled them both
in a shoe shop in Shanghai that morning:
a figure seven feet tall with black wings
like umbrellas folded behind her.
And the golden dome in a Scottish forest
that mesmerised him until silver domes hummed
down and pinballed him into the golden one.
How it ended he doesn’t say, but he
sidesteps domes of all colours these days.
Onward he dog-walks from lamppost to
lamppost, Christmas to Christmas, happening to
find what he’s not looking for and keeping
the press informed. Detectorists would give
their hoards for his secret if he knew it.
Finders of things have their doubts and fears
in the same sorts of ways as mislayers:
he fears his dog will find a good home,
having finally found him wanting. He
wonders will he find his glasses, or God (in
due course), or his voice, himself guilty, his level,
or some summer’s day a happy medium
with jovial regards from his ancestors.
Meanwhile he’s finding himself inclined
to walk with his dog till he finds his bearings.
If he doesn’t find them, anyone might.
He thinks he put them down somewhere near here.

Robert Etty lives in Lincolnshire. Planes Flying Over, his fifth collection with Shoestring Press, was published in 2020. 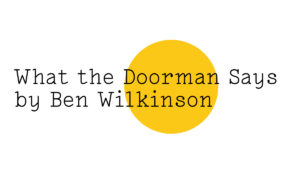