Halfway through Jo Bratten’s new pamphlet I realised I needed waterproof clothing. Water is ever-present. The book opens with the narrator scrubbing the bath on New Year’s Day, and almost every subsequent poem features some sort of liquid. However, what should feel like a literal clean start to the year is anything but:

Morning of the new year and I’m scrubbing
the bath, tugging snakes of hair
from the stinking drain, wondering
how so much of me got down here

In later stanzas Bratten uses imagery which echoes that “stinking drain” – “In the cold estuary I’m circling / black terns under a groggy sky” – and continues to question not only “how so much of me got down here”, but where that “so much” goes afterwards. In an age where climate change and humankind’s impact on the world and all its flora and fauna has never been felt quite so keenly, the final lines of the poem are:

I’m far out at sea
brining with molluscs, latching on
to cephalopods like flame, waking
somewhere in the belly of a whale,
retched up on your shore, a warning.

A Jungian scholar would love this poem and its potential allusions to depression and rebirth, but those final two words read less as a warning to the self, and more as a warning to the world. This is what we are doing to the world around us. While words like “brining” and “latching” can have preservative or caring connotations, the “retched” of the final line feels like nature rejecting us and our impact. It’s powerful stuff, and will give me pause for thought next time I clean the bath.

While this first poem acts as way of using poetry to question the self and then broadens out to encompass a wider world, there are a range of poems dotted through the collection that are referential, if not always reverential towards poetry itself. And, yes, they mention water. Never more so than in ‘Serious Verse’ where our protagonist leads us towards an evening out with “the river” (and I’m inferring it’s the Regent’s Canal up near Camden Lock on the grounds that they leave The World’s End pub), taking it to a”little cool place” and buying it “a dirty martini, extra olives, / no twist”.

Bratten manages to blend and contrast the modern with the historical, and often in the same poem

For all the heightened feeling and vaguely surreal set up of the poem, its conclusion has us asking what has happened to the river such that it drinks “like a navvy” and wants to go home with our protagonist and “lie down in front of the fan / and flood”? Those final two words are left, dare I say, floating on their own on the last line for a reason, and they emphasise, to my mind, a need to let it all out, to be overwhelmed and lose control. Earlier, the protagonist is asked if they write “serious verse” as a chat up line. We are left in no doubt by the end that Bratten very much does indeed.

For a book that is full of references to Gerard Manley Hopkins, Caravaggio, Judith and Holofernes, quotes from George Ripley and Christopher Marlowe, and allusions to Milton and Wordsworth, what stands out in this collection is the way that Bratten manages to blend and contrast the modern with the historical, and often in the same poem. ‘Chiaroscuro’, for example, illustrates and explores our inability to look away from the darkness of the world, and of social media, and compares us to Judith in the painting ‘Judith Beheading Holofernes‘ by Caravaggio.

In the fractured dark we’re all doomscrolling
before dawn. Lit up like Caravaggios:

of Holofernes caught against her bright blade,
baffling our morning brains with fresh dread.

Later on in the poem we’re asked to adopt that most modern of interactions with an image – to “Tag yourself” – and invited to wonder who we are in the picture – the killer, the killed, or the (not so) casual observer. Perhaps it was ever thus and – as Bratten implies – there is nothing new under the sun.

There is darkness throughout the book, both literally and figuratively – subjects explored include loss, environmental damage, shame, and religion and its impact, – but there is also light intermixed

‘Chiaroscuro’ is perhaps the maypole around which the other poems are woven. There is darkness throughout the book, both literally and figuratively – subjects explored include loss, environmental damage, shame, and religion and its impact – but there is also light intermixed.

A poem that shows this draws a sense of light and hope out of the literal darkness. The first stanza of ‘Solstice’ (and we will ignore the clever title and it’s sun reference) opens:

I don’t mind the dark so much going home
as the days tilt us further from the light;
the shiver of air crossing the river,
thunder from fog-plumed highways,
far off trains necklacing the night.

That “trains necklacing the night” is worth the price of entry on its own.

The second stanza begins “I miss cars in darkness seen from a plane” and ends on “cats testing the edges / of themselves, waiting for you”. The “miss” of that first line tells us we’ve moved on, we’re now in the summer solstice, and that wherever we are in the year, whichever solstice we’re shuttling between, there is much to be grateful for.

Climacteric absolutely feels like Bratten’s version of the cats of ‘Solstice’, she’s testing the edges of herself here. This book is “waiting for you”.

Mat Riches is ITV’s unofficial poet-in-residence. His work’s been in a number of journals and magazines, most recently Wild Court, The High Window and Finished Creatures. He co-runs the Rogue Strands poetry evenings, reviews for Sphinx Review, The High Window and London Grip, and has a pamphlet due out from Red Squirrel Press in 2023. Mat Riches’ blog Wear the Fox Hat is here. 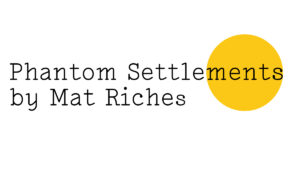