Castaway Kathy Pimlott chooses poems by Roger McGough, John Keats and Mimi Khalvati, and talks about discovering the Mersey Sound, falling in love with Keats, and confronting her own mortality

When I think about what I might choose in the unlikely event I’m invited onto Radio 4’s Desert Island Discs, I look to meet several needs – to be cheered up, to feel those I love are with me, to turn self-pity into more useful rage, to have a good cry; and to show off.  The tracks change each time I think about it.  Today, how I feel right now, it’s Tamla Motown, ‘60s soul, Hendrix, Kirsty McColl, Duke Ellington, maybe Paul Simon or the Beach Boys, one of The Four Last Songs.  But poems? Just three? What principles should I apply?

I’ve decided to go for three poems which hit me at specific times in my life and carry not only their own intrinsic treasures but also all that I was feeling, hoping for, in love with at the time I first encountered them. They are poems which have never gone away. Those looking for academic rigour should exit the page now.

So, it’s 1967, I’m 15, sodden with tears shed over the dear, dead War Poets, nearly mad with that awful teenage ennui, and here comes everything: The Mersey Sound – Roger McGough, Brian Patten and Adrian Henri – not dead, not doomed, not posh, not on the curriculum. Are they great poets? That’s not the point. They’re young and ungoverned and funny. I’ll choose one poem, one which has stayed with me down the years, Roger McGough’s ‘The Fish’. It’s a party, woozily drunk, everything just a bit off kilter, with a straight-in-there, direct opening address, “you always were a strange girl now weren’t you?”  Of course it spoke to me – I longed to be recognised as a strange girl, to be different.

Nowadays, workshopping this poem, I’d have a lot to say. But what, despite its many weaknesses, clinches it for me is the capturing of the very specific, tipsy Saturdaynightpartyfeeling, in someone’s parents’ house (they’re away)

Now I see the heavy-duty influence of e e cummings in the poem’s many compound words, “arminarmed”, “lilypetalled pond”, and the modishly sparse use of punctuation. At the time of first reading, I hadn’t yet met cummings so this was new to me, unsettling, as was the apparent 3D presence of the poet, the long-haired, loon pant-wearing ‘I’. Nowadays, workshopping this poem, I’d have a lot to say. But what, despite its many weaknesses, clinches it for me is the capturing of the very specific, tipsy Saturdaynightpartyfeeling, in someone’s parents’ house (they’re away), when:

pausing at the artificial pond
lying liquidblack and limpid
in the stricttempo air we kissed.

There’s something to do with class as well. There are French windows, lawns, a fish pond, lavender satin gloves – but the ‘we’ of the poem are outsiders, literally, in the garden, but also outside that grown-up, respectable, sensible world. We go through the French windows, the strange girl (me, Roger, me) takes off her satin gloves and pulls a fish out of the pond.

and as the quick tick of the grass
gave way to the slow flop of death
stillkneeling you said softly: ‘don’t die little fish’

Not much later, another poet flooded my senses. No question but he is great. And entirely different from the Liverpool lads – long dead for a start. Why he took hold of me is because of sex and death. At 17, every nerve ending aches, ready, and no-one does that Romantic Agony (to borrow from Mario Praz) better than John Keats. Reader, I love him. I even went out with a boy who was a good few inches shorter than me (and that was a big deal back then) because he looked like that drawing of Keats and wrote poetry. It’s so difficult to choose a single poem. ‘The Eve of St Agnes’ was my introduction to Keats, read out in its entirety by a teacher one dusty afternoon. I was ravished. The visceral sensuality of the language, the evocation of skin temperature, the excitingly creepy voyeurism, the shifting of focus, like camerawork, the sheer beauty overwhelmed me. And, it’s a long poem so that’s a bonus for a desert island. But I think I’ll choose one of the mighty odes. It could be ‘Ode to Melancholy’, with one of my favourite fragments

She dwells in Beauty – Beauty that must die;
And Joy whose hand is ever at his lips
Bidding adieu; and aching Pleasure nigh,
Turning to poison where the bee-mouth sips;

But I think today I’ll choose to take ‘Ode to a Nightingale’.

The poem is a glorious feast of twists and turns, of visual and sonic luxury, of a music that flows effortlessly.

Where to start? The poem is a glorious feast of twists and turns, of visual and sonic luxury, of a music that flows effortlessly. It’s a poem you can dance to and there’d be a need for dancing, alone on that desert island. There’d also be a need for deliciousness. (I’m imagining a very basic and repetitive diet). I always read poetry aloud and Keats, with his swoony, unctuous language, would fill my mouth with delight.

I cannot see what flowers are at my feet,
Nor what soft incense hangs upon the boughs,
But, in embalmed darkness, guess each sweet
Wherewith the seasonable month endows
The grass, the thicket and the fruit-tree wild

It is at its most intense when coupled with that other strength of Keats – his knowledge of death. It is the necessary context for the lavish, life-affirming beauty he foregrounds through his sensory acuity.

Darkling I listen; and, for many a time
I have been half in love with easeful Death,
Called him soft names in many a mused rhyme,
To take into the air my quiet breath;
Now more than ever seems it rich to die,
In such an ecstasy!

I’m not going to apologise for being so ‘deathy’ in my choices. I really do believe that the two main subjects of all poems are death and writing poetry. See below for my poem inspired by Keats – ‘Entoiled in woofèd phantasies or how Keats spoiled everything’.

The last poem I’ll choose is from much, much later, Mimi Khalvati’s ‘Plaza de los Remedios’ from her collection The Weather Wheel. And I choose this for two reasons – to honour a poet who is a master of the craft, a revered teacher and a friend, and because it speaks to me now, as I confront my own mortality.

It stands as a masterly exemplar of the poem as event, the unfolding of a living train of thought.

The scene is as mild as a nativity and beyond this
simple geometry, immense, immeasurable mountains,

a stormy Atlantic you can hear at night, snoring
like a sleeping leviathan. I would like a small life.

I would like a son who takes both my hands in his
and, walking backwards, inches me towards the end

of a cobbled street where a door opens and a daughter,
taking my hands from his, helps me over the doorstep.

Just these four couplets from the poem demonstrate the craft of poetry – a joy in itself to see – as Mimi places the natural world, threatening and ungovernable, “a sleeping leviathan”, in close proximity to the desired “small life”, intensifying both. And the craft?  The natural world sprawls over two and a half lines and across two couplet verses while the poet-I is tiny, as small as the half line sentence which contains the wish. Just so satisfying.

The emotional authenticity of the last two couplets is absolute. But they’re full of art. The details which demonstrate what that longed for care might be – the son’s attention “walking backwards, inches me towards the end / of the cobbled street”, the daughter by the door opening off the street, who “taking my hands from his, helps me over the doorstep” are beautifully chosen. The syntax of the sentence which comprises the two verses inches us slowly along, enacting the care of the son and daughter. The pleasure this poem brings me in its ‘poemness’ never fails to encourage me to do better. I think I will need that, assuming I also get the luxury item – writing materials.

It’s like that very first episode of Corrie when suddenly
here are people we know. The point is we are young,
not in London and not about to die of shrapnel or TB.

We’re outside but in earshot of someone’s flagging party,
bored, bone-tired, fingers stained with the boiled beetroot
of a Saturday job, past drunk and wanting a sandwich,

no idea of how we’re going to get home. Then the moon rises
and hangs over an ornamental fishpond. Tell me how to be
unfathomable, not just one of your too frequent schoolgirls.

You’re alive, walking similar streets. I need you to tell me
I’m interesting, notice my gloves, my peculiar fishing habits.
I need you to crash through French windows, give me leave.

Bunty Cardwell stalks the rows of desks,
her scanty five-foot-four augmented by
vibrations of disdain. Untucked, we reek
of biscuits, Fabergé and ennui.

Fastidious, Bunty does her job, checks out
our crispy gym kits, holds up aertex shirts
two years too small and never taken home.
Contempt disbursed, she then delivers Keats,

reads out St Agnes’ Eve from start to end,
her voice a steely pipe from which the verse
flows into my violet nerves to ruin sex
forever. There will be no solution sweet

to come as this collide of maiden itch
with woozy voyeuristic luxury.
I have two copies now, each one inscribed
to me: the first, an Arts & Crafts design,

‘I don’t know the words but you know, love…’
the other, Complete Works, ‘Forever, love…’.
Ah, those elliptical beaux left long ago.
Such tiny script they had, so little to say.

Kathy Pimlott’s collection, the small manoeuvres, was published by Verve Poetry Press in spring 2022. She has two pamphlets with the Emma Press, Elastic Glue​, (2019) and Goose Fair Night (2016). Her poems have been published widely in magazines, including Magma, Mslexia, The North, Poem, Finished Creatures and Under the Radar and in many anthologies Kathy lives in Seven Dials, Covent Garden, home of the broadsheet and the ballad. 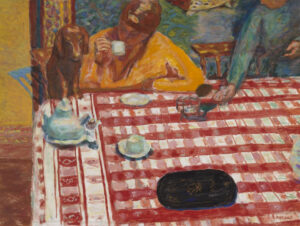 Feature: Rowan Bell on Pierre Bonnard and the art of writing poetry