Jenny Robb hails from Dumfriesshire and now lives in Liverpool; her poem ‘Crossing borders’ captures her sense of disorientation as a child migrant experiencing gradual assimilation, whilst also celebrating her Scottish culture. She’s been writing seriously, and has been published widely, since retiring from the social work sector and her management role in the mental health sector of the NHS.

The Doll’s Hospital, published by Yorkshire-based Yaffle Press, is Robb’s debut collection. It is a moving, refreshingly revealing series of poems, studded with complex first-hand experiences. Its title suggests fragmentation, breakage and repair, and heartache and recovery. The poem ‘Rosebud,’ from which the collection takes its title, succinctly distils the themes – absence, sadness, migration, separation and despair. A beloved doll, the child’s only confidante, breaks just as the father disappears, returning in another completely different guise. A Grimm tale, indeed.

Robb confronts mental health issues full in the face; it is clear that the poems are based on her personal tribulations. Her work is brave, with the clarity of perspective, and explores fractured parenting, disharmony and recovery. Friction sparks across many of the pages. Poems about the art of being a woman resonate with us in the current political and social climate. Silences and secrets make survival problematic.

It is a moving, refreshingly revealing series of poems, studded with complex first-hand experiences

A particular focus in this collection is the father figure who was absent during the poet’s life between the ages of six and eighteen. The narrator draws on the complex history of biological and blended families. Parents are pivotal influences in the formative years of their offspring, and adult dynamics play their part too (Larkin can testify to that in this, his centenary year). Fathers are core components / protagonists in the central work of a number of significant poets, and their poetry yields insights into the varying qualities of their fathers – their devotion, absence, kindness, dominance and disapproval.

For example, in Sharon Olds’ poem ‘The Father’ the poet grapples with the illness and death of her parent and delivers a frank, livid experience of her frustrations within the relationship. Sylvia Plath’s complex, surreal poem ‘Daddy’ is famous for its dynamism and sense of suffocation. Brendan Kennelly’s ‘I see you Dancing, Father’ is a tender expression of a memory of an unbroken man. Pascale Petit writes of her father in the red-raw of ‘The Zoo Father’ while Kim Addonizio speaks of grief and closure in her poem ‘In Dreams’. Heaney’s ‘Digging’ and Tony Harrison’s ‘Long Distance II’ and ‘Bookends’ create accomplished cinematic profiles of their fathers.

In The Doll’s Hospital, the poem ‘Instructions to a new father’ introduces us to Osmond, the man in question. It is the work of the poet’s imagination. He’s pictured as a single-minded writer who’s out of his depth when faced with the responsibility of looking after his infant daughter. After all, he’s a poet. He fails to pin on a nappy without drawing blood and finally abandons her in her cot to “disappear into our frigid bedroom / with a tumbler of whisky.” The mother saves the day on her return, and we are left with the image of an unconscious individual needing the care he cannot give his child, beside him “A tumbler with whisky dregs, / An empty pill bottle.” Robb reveals the wound which runs deep, and the scar which may never heal.

‘Dear Jen’, an epistolary prose poem, reaches out to create a bridge between father and daughter. It begins with that goosebump-rendering line “I miss you”. Such a huge, affirming thing to say, and brimming with yearning. It’s an optimistic letter, overly upbeat. He seeks a conciliation. “I just want to see you, hear you, know you, hug you.” Wishful dreaming, perhaps? It is immediately followed by the poem ‘Visiting Dirk Bogarde.’ The title refers to a noted English matinee idol and award-winning actor of the 1950s and 1960s. Inside a powerfully cinematic storyboard, we are placed in the scene. The daughter meets her “puffy, pale” father, a patient at a mental hospital, and takes his “moist hand reluctantly”. The tension is palpable. There’s a sense of otherworldliness and defeatism. They skim stones and “Dad’s hop, plop and sink.” Little is said. “Mum strains a smile.” The only energy belongs to the child who chatters, laughs and skips.

‘His Eyes’ seems to be the father’s swansong. He’s being “eaten alive” by his hospital existence, promising to see the daughter the following year and treat her to a Berni Inn steak. The place and time references bring colour and immediacy to the innocence and naivety of childhood while heightening the Gothic. ‘Dear Dad,’ placed towards the end of the collection, is a response to ‘Dear Jen’. It’s a reflection on genetics, fear (“of being like you”) and love – “… it seems you gave me poetry and madness, regardless.” There’s understanding, from the perspective of water under the bridge.

Robb confronts mental health issues full in the face. It’s clear that the poems are based on her personal tribulations. Her work is brave, with the clarity of perspective

Robb gives equal prominence to the mother-daughter relationship; in this case it’s a healthy dynamic. Fiercely frank and uncompromising, the poet reflects on her own baby, sharing experiences right up to the present day. I am reminded of Anne Stevenson’s piece ‘Poem for a Daughter’ and the wry observations Hugo Williams makes about his ageing parent in ‘Dinner with my Mother’. Joy Harjo, the Native American laureate, also inspires a couple of the poems in the collection, including ‘Nini Baba Nini,’ Robb’s praise poem to her mother. It’s a biography in less than thirty lines, incorporating scorpion stings, bully taunts, and a friendless childhood. Robb’s mother overcame adversity through the memory of her Ayah’s lullaby and the “grit in your core”. (She must have been a woman of considerable substance.)

In ‘Still life’, near the beginning of the collection, we are introduced to the repeating motif of fragility. When describing her mother’s leukaemia Robb uses red and white roses as a sophisticated metaphor for blood cells. Their cut stems “bleed, unseen, into water”, and “… blood transfusions / blush your cheeks, for a while.” ‘Lady’s mantle’ is a poem in which the characteristics of the plant mirror those of the mother. It grows in the narrator’s garden, has “shy, tiny stars” and “eases cuts, muscle-cramps, wounds”, a tender metaphor after the acerbic quality of many of the poems about her father.

The prose poem ‘The beginning and end of the world’ considers how the place where a child might find safety. A bed is undermined by its definition as the location of birth and death, the two occasions we enter and leave alone. It’s packed with the terror of the night, sweaty anxious teenagers, body liquids, ageing, sleep, insomnia – life on an edge. Even dreams are jinxed by failure and struggle. ‘My mother’s resurrection’ takes us to the funeral – a surreal, out of body moment. Dead, yet not dead, the daughter’s “loss grumbling in my bowels,” the desperate denial – the eternal conversation we have with the departed is palpable.

Like a good Shiraz, my red wine of choice, Robb has infused her poems with a full bodied and balanced spiciness which lingers long on the poetic tastebuds

The mood is lifted, albeit with a tinge of yearning, in ‘Stealing Hannah’s lip balm.’ A daughter’s childhood is encapsulated in the scent of Sprite Lip Smacker. A mother consoles herself by balming her lips. Here the balm is both physical and psychological, a connection between Liverpool and Sydney, and reminds me of the idea of sharing the same moon.

Finally, ‘Sky dive,’ which falls on the page like a parachute, seems to release all tensions and fears after years of responsibility and anxiety placed across the collection.

I’m not your parachute.
You are weightless.
Your face is joy.

Interspersed with these poems are poems exploring the vagaries of school and university life, of landscape, and of lost and present friendship. Past cultural events, popular music and political tensions sit vividly on the page. The narrator questions her own existence and navigates the shockwaves radiating from a blended family, employing delicate sensorial phrasing. Ageing, menopause, pregnancy, boyfriends and sex, winning, and winning approval being a woman, pregnancy and miscarriage, menopause, bad love, infatuation – all life is here, and all will find a happy place. Like a good Shiraz, my red wine of choice, Robb has infused her poems with a full bodied and balanced spiciness which lingers long on the poetic tastebuds.

Maggie Mackay loves family history, winding it into lyrical poems in print and online journals such as Ink Sweat &Tears, Prole, Spelt, Southlight and in several anthologies, including ‘MeToo’ and ‘Bloody Amazing!’, both winners of Sabotage Awards. Her pamphlet The Heart of the Run was published by Picaroon Poetry in 2018 and her collection A West Coast Psalter, Kelsay Books in 2021. The Poetry Archive WordView 2020 awarded her poem ‘How to Distil a Guid Scotch Malt’ a place in the permanent collection. She is a MA poetry graduate of Manchester Metropolitan University and a reviewer for Sphinx Review. 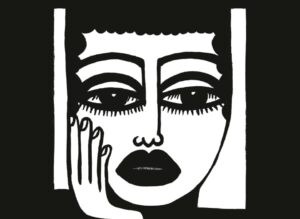 A flower blossoming out of the hole in my face

Book Review: Khadija Rouf reviews Bless the Daughter Raised by a Voice in Her Head by Warsan Shire (Chatto & Windus in collaboration with Flipped Eye, 2022)