Carl Tomlinson reviews what is near by Kay Syrad (Cinnamon, 2021)

Those of us daring (or arrogant) enough to examine our partially explained world with the 26 characters available to writers of English have to accept that most of our attempts to elucidate that world are doomed to fail. This is particularly true when we write about other species. When we talk and write about environments or situations created by humans, we have the advantage that the objects and phenomena we want to describe are products of our agency. Their existence and their taxonomy are concurrent. Mosses and dunlins, lichens and curlew, light and water and most of the other subjects of what is near have been doing their thing since before we could grunt our response to them, let along scratch it on cave walls.

A writer who wanders, or strides, into nature faces the additional challenge of treading well-worn paths. What is to be said that hasn’t been said already by John Clare or Edward Thomas or Alice Oswald? Sarah Watkinson (in Photovoltaic, Graft Poetry, 2021) brings decades of rigorous scientific work to her writing yet still finds herself trying out French and German alongside English as she struggles for a “Lingua Franca” (‘Norham Castle, Sunrise’). In ‘(Lighthouse)’, Jen Hadfield speaks of “language a wingbeat behind” what it tries to capture (The Stone Age, Picador, 2021).

An unseen question mark lurks after the title. The typesetting calls to mind an eye test. The title, and her name, eschew capitals

You don’t even have to open the cover of Kay Syrad’s new collection to see that she’s going to embrace, and work with, this contingency of written language. An unseen question mark lurks after the title. The typesetting calls to mind an eye test. The title, and her name, eschew capitals. The Contents page reveals sections called ’t/here’ and ‘no   not’. Don’t say you haven’t been warned when you encounter the opening poem, ‘breathing is disturbed’. Here are jagged lines, long spaces between words, and a statement / question in “what is precious now”. That’s all before we get to the closing four lines of the 14 line poem where we find an adjective which might be a noun, and a contranym:

The section titled ‘no   not’ contains poems (especially ‘no   not’ and ‘long denial’) which place the certainty of passionate belief against the fragmentary quality of knowledge. We can’t fail to hear ‘no’ as ‘know’. There’s an audible relief in the “I can only assume” which opens the section’s final poem ‘chrysalis’. Syrad has a thing about moss, giving it close attention in many of the poems and using it as the title of two sections of the book. She revels in its duality, existing as it does somewhere between water and air, between its host surface and her touch, leaving her and us “between sense / and explanation” (in ‘I will be quiet’).

Here, and elsewhere, we encounter a hint of anthropomorphism which remains on the right side of queasiness and is resolved in ‘boundary layer’. The poem recalls Donne as it shows how our humanity is no more contained by our bodies than the world is by our language. By the same token the pathetic fallacy in which “hope is green after 7 days of continuous rain” could might as easily be read as synaesthesia. Either way it’s perfectly at home in ‘block’ which addresses directly the failure of language.

All poems worth reading are full of decisions. The best poems conceal most of them. When we notice them we are entitled to question them. When the ‘cui-ui fish’ swims into the otherwise familiar vocabulary of the poem ‘long denial’ we need to ask if earns it place, especially when we are told we (should) know about it. Is it distracting? Are we being goaded to Google it? Syrad’s conscientious engagement with her themes and her candid — though never mawkish — personal vulnerability earn her the benefit of the doubt. I’ve come to see this fish (of which I remain ignorant) as a metaphor for the way Syrad is content to leave her subjects where they belong — just beyond the reach of artifice.

Any serious writer who pushes the possibilities of syntax, form and language this far raises the question, if not the accusation, of self-indulgence; ‘Don’t they know how to do anything else?’. Teachers, and self-appointed guardians of the creative process often tell us that we must know the rules before we break them. Syrad renders any such criticism redundant in two poems which widen the focus and attend to common experience. ‘they’ is a stark, but not simple, account of the deaths of 21 Chinese cockle pickers in Morecambe Bay which forces us to face our own quiet complicity in both this tragedy and the other widespread abuses which subsidise our lifestyles. Its gaping parentheses might be mouths open in shock. ‘I will not go now’ — written during lockdown — will strike a chord with all whose travel plans were mocked by the virus while the mosses, trees and ferns carried on without us.

Similarly, the absence of capital letters and punctuation are demonstrably honest attempts to keep language in its place. Attentive readers will note the capitalisation of proper nouns and the first-person pronoun and conclude that these are choices which tell us about the redundancy of certain other aspects of formal language in these poems. At its worst this kind of writing can sprawl. Syrad’s doesn’t. Poems like ‘long denial’ and ‘non-attachment theory’ hold the line. They are stiff with exacting virtuosity. The forms of the poems in the ’t/here’ section have tidal rhythm and form which suit their theme of migration. Our fragmented and destructive relationship with the land is captured in the scattered words of the poem ‘now we hardly ever’. It’s this concentrated unflinching enquiry into, and experimentation with, the act of description that allows Syrad to say, in ‘meanwhile   I barely know what grass is’

— and allows the reader to believe her. 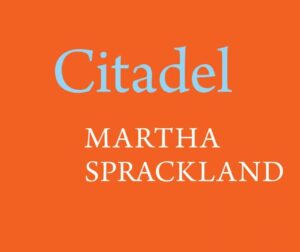