We chose ‘Visiting David Hockney’ by Michael Di Placido to be our Friday Poem this week because we enjoy its quirky, dream-like nature. it’s a kind of fantasy portrait of Hockney and his studio, and it’s rather like a Hockney painting — loose and bold with vibrant primary colours. But it’s also a self-portrait of the poet-persona — friendly, forward and familiar (perhaps a little too much so). We like the shift in tone from intimate and conversational to whimsical and surreal, and the feeling we get from it that anyone can do anything in a poem.

He looks up and half smiles
as I drift in and settle on a chair —
as though I was expected:
“The studio would have to be a riot
of colour with you in it”, I say.
And when I tell him I live near Brid —
not far from his mum’s old place —
he seems genuinely intrigued.
We’re almost mates by this time.
I ask if he’s using pen and paint —
pastels, maybe? Whether it’s that
bowl of fruit he’s about to work on?
Forward at the best of times, I’m on
a roll now: “C’mon,” I say, “you can tell
me” — he’s smiling and scratching his nose —
“Matisse was your hero, right?”
“I’ve a few,” he says, guardedly,
in his best David Hockney voice.
I say that my grade 6 ‘O’ level Art
was a stitch up. His eyes crinkle.
“I bet when you’re in LA and France
you miss Brid’s sea-fret and drizzle, eh David?”
He puts his brush down and studies me
through those owl-specs, shaking his head.
A yellow light’s clarifying everything —
the curtains are a shock of blue.
Squatting in the centre of the studio —
a marble table. “Bradford quarry?”
I ask. He’s smiling again now,
and begins to laugh out loud
as I float away … 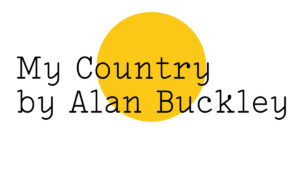