The title of Emily Berry’s 2013 debut, Dear Boy, was the perfect envoy of its rhetorical range. Read straight, ‘dear boy’ is tender, but as an exclamation of false intimacy it expresses a very English combination of personal awkwardness and a barely disguised social binary of dominance and subordination. In the more personal poems, this ambivalence registered as a hesitation between disclosure and concealment, apparent both as a theme but also as a distinctive note in Berry’s voice.

Like most first collections, Dear Boy drained a wide catchment of pre-publishing-deal experience, wryly acknowledged in the line “I have discovered the meaning of life and it is curatorial”, and when the poet-persona herself was found among the exhibits this just seemed part of the collection’s playfulness. Several of the poems dramatised the speakers’ own situations while also reflexively interpreting them to the reader. But all the while, through formal variation, carefully modulated irony and something appealingly squint in the vision, poet and reader alike were allowed sufficient psychological and aesthetic distance from these situations to recognise them as poetry rather than the unmediated and messy stuff of life.

Stranger, Baby, which came out four years later, marked less of a change than was first apparent. Its motive was the death of Berry’s mother when the poet was a child, and the poems were repeated embarkations into shoreless, depthless grief. At their best the poems of Stranger, Baby seemed precarious, improvised vessels, barely able to contain their freight of anger, guilt and loss. Yet at the same time, curiously, grief was also found to provide ideal psychic terrain for the tension between self-withdrawal and self-display first aired in Dear Boy. Berry was now the curator and public devotee of her grieving self, naked as only grief can make us, and the discomfort of this nakedness provoked different kinds of deflection and defensive response. Reviewers of Stranger, Baby tended to exaggerate its polyphony, while in interviews of the time Berry herself downplayed its autobiography, adopting Sharon Olds’ formula that the voices of her poems are only ‘apparently personal’. A different and tellingly contradictory form of defence was employed in the poems themselves by a narrative voice that repeatedly drew mocking attention to its own plight:

Once, I was not sure I was capable of loving
Then I was too capable
Part of my story is sad
Other parts are aspirational

Midway through, one began to feel that Berry was resorting to this managerial commentary a bit too readily and that too little room was allowed for the reader’s own interpretations, as when you’re handed headphones at the gallery entrance and urged to accept the pre-recorded audio-tour. Moreover the frailty of the grieving self was persistently intellectualised as a means of exploring the academic notion that there is no such thing as a self at all. A prominent sub-theme of Stranger, Baby was Berry’s critical commentary on her Freudian psychoanalysis, yet one felt that with her textual references to mirrors, and the development of the enthralled self-scrutiny that had already been discernible in Dear Boy, she’d be more at home on a Lacanian couch. (When all’s said, Freud believes in the self; Jacques Lacan doesn’t).

Most of Unexhausted Time is prosaic and emotionally uniform, a mutually reinforcing recipe for listlessness exhibited in desultory micro-stories of hopelessness and failure

The boundary between self and persona comes under greater stress the more autobiographical an artwork is seen to be, which is why postmodern theory thrives so well in this zone. Both Berry – who between Dear Boy and Stranger, Baby began a PhD in Creative and Critical Writing – and her reviewers seemed at home in this masked ball of theory where the clever conversation and dancing in tight spaces never ends. A parent ‘complex’ here, a mirror there, and everyone with a degree in the humanities can play winking, referential games unto happy exhaustion.

The disorienting trauma of grief tacitly endangers lyric poetry by threatening to undermine the ‘I’ of the poet and thus by this means also to collapse any meaningful distinction between person and persona. But the distinction is necessary, relied upon by readers for whom the ordinary and proper wish to stand back from the person of the author is strengthened by the embarrassed circumspection with which we approach another’s grief. From the point of view of the poet, it’s no accident that under the pressure of grief the lyric impulse often borrows the formal clothes of elegy or else – achieving the same distance by different means – explicitly ‘stages’ itself in techniques borrowed from drama. In our informal age poets might shun these strategies but the risk is that without them the centripetal pull of grief – residing not least in its solipsism – will result in what Alexa Winik, in a review of Stranger, Baby, bullseyed as ‘a negative space of paradox and seemingly infinite interiority.’ Self-abandonment coupled with a refusal of formal discipline menaces the careful balance required to make poetry out of grief. So when in Stranger, Baby we read:

I watch the water pour out of my eyes [she’s at the mirror again]; there was a feeling
but I wrote it down and it ceased to be a feeling,
became art

we as readers were right to reply, ‘I’ll be the judge of that!’

Yeats warned that “all that is personal soon rots; it must be packed in ice and salt”, and at least Stranger, Baby exhibited some continuing faith in the traditional poetic preservatives. Not so in Berry’s new collection, Unexhausted Time, which manifests precisely a kind of poetic exhaustion. It’s there in the overdone imagery – “the smashed face of the moon”; “her mouth glowing red and crisp / like the dying end of a cigarette”; “the wind riffles through the chapters / of my life” – which oddly resemble cribs from the lyric sheet of my sixth-form emo band.

And it isn’t a case of the odd misjudged line. There are whole rambling passages of banality striving for revelation:

There is something shocking
about a family, the way they gather together,
all looking the same. The way they don’t gather
together. At the back of the house the lawn
stretched out like a sheet, as if flung by the rockery.
There was a shed in which children conducted
business.

Most of all, in Unexhausted Time, which lacks the curiosity and mischief of Dear Boy and the psychological tension of Stranger, Baby, we see the full flowering of the speaker’s tendency towards ‘infinite interiority’. The compulsion to foreground the unpleasant or awkward, which was piquant in the mix of Dear Boy, has here become bland through overuse. And much more so than in Stranger, Baby, though it may be trivially true that the various ‘I’s are differently positioned, any potential subtleties of focalisation are nullified by the sameness of the tone. Most of Unexhausted Time is prosaic and emotionally uniform, a mutually reinforcing recipe for listlessness exhibited in desultory micro-stories of hopelessness and failure:

Oh, once I was a seed
but when my shell split open I pinched
the tiny sprout until it withered away

We waited hours to be seen,
and then we were turned away.

And true to Berry’s habit, these exhibitions of wretchedness are also then remarked upon, though drawing attention to the ugliness of one’s misery is of course just another way of commodifying it:

No doubt some abstract stimulation could be wrung from all this. We could say that, just as the confessional mode of Stranger, Baby blurred the roles of reader and therapist, the reader of Unexhausted Time has now become the mirror before which the poetic selves conspicuously languish. It’s still an exhilarating space for anyone acquainted with theory, and the ‘application’ of Julia Kristeva’s theory of abjection to Unexhausted Time is someone’s field-day-in-waiting.

When her attention is directed outwards towards other, autonomous lives, she enters into conversation with them and discovers that in doing so both the self and the grounds for lyric poetry are re-established

But there’s no honest way to avoid this collection’s weakness, and the main reason why Unexhausted Time marks such a regression from Stranger, Baby is because here language itself is explicitly disenchanted:

Writing was a mist rising off my life, that’s all.

I don’t know why you care so much about / other people’s poetry.

Reading this, and leaving theory out of it – can we, please? – we’re entitled to ask the most basic question: why would people read poems by a poet who repeatedly gestures towards having given up on poetry?  A poet who can put forward for publication something like ‘Fish Tank’, reproduced here in full:

Once I watched a woman in a fish tank
shitting directly into a tortoise’s mouth. It
was meant to be some kind of spectacle. She
was invited to do it and was very happy to,
and the tortoise was happy to eat.

I don’t know whether this poem makes me feel more like the spectator or the tortoise, but I’m unhappy either way. Compare it with Berry’s other tortoise poem, the charming ‘Hermann’s Travelling Heart’ from Dear Boy, to appreciate just how far things have deteriorated.

And yet … A couple of poems in Unexhausted Time do find release, for both the narrative persona and the reader, in engagement with the world beyond the masochistic ego. In ‘Dream of a Dog’ the animal’s “stomach rises pale and / softly furred”, “her ribcage / strung like an archer’s bow”, and the tone is for once gentle, undemonstrative and open to outside impressions. ‘(Late spring evening)’, meanwhile, centres on a quiet epiphany that chimes a perfect pitch between resignation and a wisdom within reach of joy.

It is something to see a heron in sunlight,
or the way a duckling stands and stretches itself
tall. There is no other life, but there are so
many lives.

In the context of what’s otherwise a difficult book to admire, it seems important to note that moments like these don’t just look good by comparison but actually hint at a mature voice exceeding in emotional depth anything presented in Berry’s earlier collections. When her attention is directed outwards towards other, autonomous lives, she enters into conversation with them and discovers that in doing so both the self and the grounds for lyric poetry are re-established. 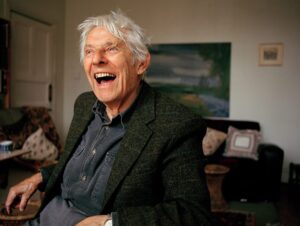 Unpack a poem: Tony Curtis on 'In the Theatre' by Dannie Abse