In 1967 I was an undergraduate at Swansea University (U.C.W. Swansea) reading English. That campus was a remarkable place, across the road from Swansea Bay and the beach, a short walk from the town and its rugby and cricket grounds at St Helen’s. The English Department was also remarkable: their English Society used staff connections to invite an impressive programme of guest writers – poets John Silkin, Kathleen Raine, W. R. Rogers and Dannie Abse. The ground-breaking novelist B. S. Johnson introduced his forthcoming novel, The Unfortunates, which was published in a box with 27 chapters, 25 of which were to be to be shuffled and read in random order. I ordered a copy for six shillings and nine pence, a significant outlay for a bloke on a grant. That rare copy is now in the National Museum of Wales Library collection. Inside the box are three letters from B.S. Johnson to me as he accepted poems for the Transatlantic Review some years later.

The academic year 1966/7 was especially notable because the University had invited Vernon Watkins, recently retired from his life-long job as a bank clerk on the Kingsway, to be a visiting Guggenheim Fellow. A small group of us opting for British and American Lit. met with him, and on several occasions I was the only one who turned up for his talks, which often ended up on a bench in Singleton Park which adjoined the campus. I was overawed by this Faber poet and friend of Dylan Thomas and can remember little, except for Vernon’s declaration that “Dylan, you know, was a Christian poet.”

More significant for that budding student-poet was the visit of Dannie Abse. Here was a (youngish) man who was handsome, Welsh, famous and who read accessible poems with distinctive voices and themes. The best Performance poets I’ve ever witnessed are written poets – Seamus Heaney, Michael Longley, Donald Hall, Gillian Clarke.

Dannie Abse’s poem ‘In the Theatre’ left us stunned. Its use of voices and direct speech harked back to my encounters with Robert Frost, Eliot and Robert Browning, and affected me as powerfully as the latter’s ‘My Last Duchess’. The effect on my own poetry must have percolated over the next fifteen or so years, because in the early 1980s I eventually moved out of the influence of the Confessional poets. (I had completed an M.F.A. at Goddard College, Vermont and had been reading widely in contemporary and recent American poetry.) I won the National Poetry Prize in 1983 and was short-listed for the Arvon / Observer Prize the following year: those poems were in a group of war voices which deployed the dramatic monologue, evidently to good effect.

Dannie Abse’s poem ‘In the Theatre’ left us stunned

In my seventy-fourth year, last autumn, Seren published my first novel – Darkness in the City of Light. It too deploys a range of voices. I still find that strategy gives clarity and focus to my feelings and thoughts. It is an approach to writing which still characterises my next and eleventh collection, Leaving the Hills which Seren will publish in 2023. In my long professional career in Creative Writing, I was constantly encouraging others to move out from their own lives to find expression through the lives and voices of others. We find ourselves more clearly and objectively in other people and other times. If my second novel, provisionally titled The History Race, appears in due course it will again use some pages of poetry as narrative. In fact (casting a hostage to fortune) that 1983 prize-winning poem, ‘The Death of Richard Beattie-Seaman in the Belgian Grand Prix, 1939’ will be one of the pivots around which events occur and characters interact.

What I had learned from Frost and Browning and what was confirmed by Dannie’s writing and performance was the freedom of writing a recollection through the experiences and voices of others. “He do the police in different voices” – Dickens and T.S.Eliot. What was exceptionally powerful was Dannie’s reading of that poem for an audience. The voices and his voices were dramatic, gripping and shocking. His brother Wilfred’s training with Lambert Rogers made such a deep impression on his younger brother that the mature poet re-visited and re-created the operation in a way that only a fine writer could. What Dannie brings to the awful facts of the brain procedure is an empathy and imaginative strength that builds on Wilfred’s account. We can only surmise the effects of such accounts on the third Abse son’s decision to follow his medic brother, rather than Leo, the successful lawyer and long-serving M.P., though both served as models for the growing boy and for his intellectual and moral growth.

‘Only a local anaesthetic was given because of the blood pressure problem. The patient, thus, was fully awake throughout the operation. But in those days—in 1938, in Cardiff, when I was Lambert Rogers’ dresser—they could not locate a brain tumour with precision. Too much normal brain tissue was destroyed as the surgeon searched for it, before he felt the resistance of it … all somewhat hit and miss. One operation I shall never forget … ’

Sister saying—‘Soon you’ll be back in the ward,’
sister thinking—‘Only two more on the list,’
the patient saying—‘Thank you, I feel fine’
small voices, small lies, nothing untoward,
though, soon, he would blink again and again
because of the fingers of Lambert Rogers,
rash as a blind man’s, inside his soft brain.

‘Leave my soul alone, leave my soul alone,’
that voice so arctic and that cry so odd
had nowhere else to go—till the antique
gramophone wound down and the words began
to blur and slow, ‘ … leave … my … soul … alone … ’
to cease at last when something other died.
And silence matched the silence under snow. [1]Dannie Abse, ‘In the Theatre’ from New and Collected Poems, published by Hutchinson. Used by permission of The Random House Group Limited, http://www.randomhouse.co.uk. Also in White … Continue reading

This poem occupies the middle ground between the lyric and the narrative, which is so typical of Dannie Abse. Few contemporary poets have achieved the power of story-telling and the music of poetry in a single text as often as in Dannie’s poems. He spoke of himself as wearing the white coat and the purple cloak – both doctor and magician, the man of cold, professional detachment always pulled towards the life of the imagination and the healing of art. The necessary distance between doctor and patient in that professional engagement of the operating theatre becomes the closeness of a meeting of souls. The ventriloquist’s dummy proves to be all too human and frail, in common with the operating team. The growth’s “wild time” is beyond their reach and skill.

Doctor Abse always prefaced a reading of this poem by the disclaimer that advances in surgery and medicine would render such a clumsy and damaging procedure impossible. Abse the poet takes Wilfred’s story and inhabits it; he and his reader are standing next to Lambert Rogers and his dresser in the realisation of this poem. The irritated delay in progressing through that day’s surgical list is held in a rhyming couplet, the only such in a poem which cleverly uses end-rhymes and half rhymes to hold us to the poem’s varying of speed and focus across its four seven-line verses. Until that devastating slow / snow half rhyme at the end of the fourth verse and its final image, one of the most powerful and moving I know.

Is the man dead – he is never named, he is the “patient” – or brain dead? There is no happy ending, no successful outcome from this operation. Perception, imagination, identity, are all lost. This intervention by the surgeon in to the man’s body goes beyond the goal of saving him and, most terrifyingly, the patient knows that his soul is the awful collateral damage. That damage, and his realisation of the implications of “the probe’s braille path” and the blind surgeon’s loss of direction, his guesswork, leave the theatre team, the poet and his reader changed and in a much colder place. The silence under snow is a place without features and hope: well, Dannie seems to say, we shall all find out.

This poem changed my life as a writer and deepened my sense of the precious time we have here. You don’t have to take my word for it: hear Dannie read this poem. It may change your perception of poetry, of poetry reading and of much else.

Tony Curtis is a poet, critic and editor. He is Emeritus Professor of Poetry at the University of South Wales where he established Creative Writing in the 1980s and directed the M.Phil In Writing for many years. He won an Eric Gregory Award in 1972 and the National Poetry Prize in 1984, and was given the Dylan Thomas Award in 1993 and a Cholmondeley Award in 1997. He was made a Fellow of the Royal Society of Literature in 2001, and in 2004 he was awarded the first D.Litt. by the University of Glamorgan. His eleventh collection, Leaving the Hills (Seren Books) is out next year. 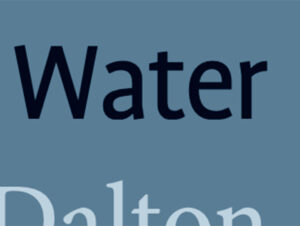