In the third of our series of poems to make you smile and make you think, Mike Barlow, Helena Nelson and Martin Figura choose favourite funny-serious poems by e. e. cummings, Mark Halliday and Peter Howard

“With its deceptive tone of humour and naïvety (characteristic of cummings) this poem takes a swipe at the national psychosis that accompanies war. However, as an anti-war poem I’m not sure it qualifies as ‘funny’, though the irony packs its punch without being heavy or portentous. The layout and typographical games I’ve always enjoyed with cummings seem to me to add levity to the poem. And it’s the final capital E that brings out my smile.”

my sweet old etcetera
aunt lucy during the recent

self etcetera lay quietly
in the deep mud et

cetera
(dreaming,
et
cetera, of
Your smile
eyes knees and of your Etcetera)

Read ‘my sweet old etcetera’ at All Poetry

Helena Nelson chose ‘Whang Editorial Policy’ by Mark Halliday. She says, “When it comes to funny poems ‘Whang Editorial Policy’ is a top pick. I first read it in Poetry Review during the Peter Forbes years (2002 or before). Have there been any laugh-worthy poems in that revered periodical since? If so, I haven’t seen them. Taking the piss out of the top poetry brass is essential for sanity, but alas, it is rare. This little mock-pompous editorial is, it seems to me, in the noble tradition of Thurber. I wrote to Mark Halliday in homage, and have been corresponding ever since.”

The editors of Whang invite poetry that wears purple
stilletto heels without claiming that this is heroic,
and red football jerseys with the numeral 88.
We expect the kind of momentum and alternating current
that you’d expect with your head in the mouth of
Sophia Loren in 1957. Please single-space and leave
visible margins and italicize foreign words.
Do not assume that to say “Barcelona” or “heart of night”
or “blue soufflė” will open every door at Whang.
We look for poems that embrace God because God has failed
and not the other way around. Send only such poems
as you would choose in lieu of a cigarette before
execution by firing squad. But do not suppose
that facile verbal violence can make us gape and squirm.
We want poems that squeak with the labor of building
elastic altars, but not poems that mop and mow
upon the moony terrace, not desiccated poems
that wring their hands above a carpet of twigs.
Strange is okay, but not So-Proud-To-Be-Odd.
If your work merely shuffles and titters
with chipmunks glimpsed teasingly in rearview mirrors,
please send it elsewhere. Whang is an outlet for sacred
lava. Whang is devoted to the nervous fingers of
the short shadowed person frowning in the bagel shop
at a book about Manhattan in the Twenties; but
this is far from the sort of poetry that is flecked
with marinara sauce and garlic amid exploding flashbulbs.
We are not complacent at Whang. Nor are we fixed.
We are incipient and pulsing. The world, for us,
is a vertigo of quicksand and we edit as freemasons
in the vale of Tempe, where love is only just before
the hour of quote loving unquote, and yet
your envelope won’t even be opening if you think
it’s merely a matter of boom image boom image boom image
boom. You have to care more. For us the dreamer is
a quincunx of trees in a gale of ink with a grace
as of owls that are not mere birds. For further guidelines
send nine dollars. If you are a churl, do not submit,
but do subscribe. We stay up late, and morning finds us
crusted with homage to fickle dancers whose hair is frizzy.
If you wish your poems returned, check the alley out back.
Know this, know this, we are not just “doing our thing”,
we are not just “another eccentric mag”. Things have gone
way, way past that. Life whispered “spring” and we sprang.
Do not take us for granted at Whang.

Martin Figura chose ‘Reconstruction’ by Peter Howard. Martin says, “Peter Howard is one of the very first poets I got to know and awakened me to what poetry could do – anything! We were in the same workshop group and ended up as colleagues in The Joy of Six poetry performance group.

“Sadly, Peter died five years ago at only sixty. He studied Phsysics and Philosophy at Oxford and went on to work as a telecommunications systems designer.  Science was often a part of his poems, as was office life. He was a pioneer of the use of technology in poetry and at one time had a column for Poetry Review. Here is his Guardian obituary written by Simon Rae.

“He was a quiet man and you’d be easily fooled into thinking he didn’t have much to say for himself. In fact, he was a very astute observer of human behaviour and produced marvellous poems about small ordinary things and big, extraordinary things! These poems were often wry, ironic, funny and always very clever and unexpected. It was Peter’s poems that The Joy of Six most often turned to for our jointly voiced poems, which is testimony to his and their generosity.

“I’ve chosen ‘Reconstruction’ from his collection Weighing The Air (Arrowhead Press, 2007). It perfectly skewers how helpless we are in the face of events. It piles on absurdity and paranoia line upon line, as we chuckle to its bleak conclusion. It seems ever more pertinent as I write this.”

The person next to me has fallen asleep.
I think, these days, it is better to keep awake.
Recently we heard the last of the conference rooms is to go.

Supervisors sit by their telephones while teams of workers
arrived to take away the walls of their offices.
One manager had his whole floor removed.

Everyone is leaving the country; no one will tell you why.
There is a desperate shortage of hard knowledge:
it can take hours to trace the origins of a rumour,

only to find the trail leads back
to the person you passed it onto,
who will deny ever having heard it.

Many of us have been moved to unfamiliar locations.
Someone, two desks away, has simply
disappeared.

I reported for work this morning
to find that the ceiling above my station
had been removed during the night.

Every key click now echoes
off bare concrete: it is not possible
even to type with discretion.

I was informed I could not be given facilities:
my profile had been ‘lost’.
There were boot prints on my chair.

Even the tiny rooms, where there is only space
for two people to whisper together,
are now condemned. 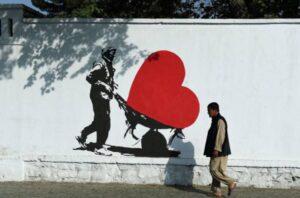 Voices in a strange land