Christopher James’ poem ‘The Unicyclist of Benghazi‘ paints a compelling portrait of the eponymous unicyclist, from the arresting image in the first line to the moment where he disappears into smoke, leaving his son nothing but an accumulation of wise advice. The poem, like the city of Benghazi, is vibrant and exciting and packed full of rich detail. It’s confident, and compassionate, and we like it a lot.

The Unicyclist of Benghazi

Like a cricket balanced on a 1 piastre piece,
my father spun through city streets.
Make a friend of the horizon, he’d tell me.
Remember, we already know how to
ride the single wheel of Planet Earth.
He’d deliver letters and plates of spinach;
anything to keep the wolves from the door.
He’d race microbuses to Al-Fundaq,
bunny hop staircases and once, even
outran a tiger, escaped from al-Bosco zoo.
On the giraffe’s neck of his seat pole,
he’d spot traffic jams before they happened,
report house fires, and, so it goes,
rescued a boy from a third storey window.
I’d sometimes see him leaning into bends,
throwing his shadow on the wall, becoming
a cyclist for a moment, before turning
into Gamal Abdel Nasser Street. Under
spokes of sunlight, I’d tag along, while he shared
the art of the singular: Two wheels, he’d say,
is a waste of rubber and a failure of nerve.
On the day the soldiers came, I watched him
disappear into the smoke, weaving through debris.
Never believe for a moment you can fall,
he said, as he vanished, teetering into history.

Christopher James is a winner of the National Poetry Competition, Bridport, Ledbury, Crabbe and Oxford Brooks poetry prizes. Born in Paisley, Scotland, he has an MA in Creative Writing from UEA, and has also written for the theatre, including a trilogy of plays about the life of Sir John Betjeman. 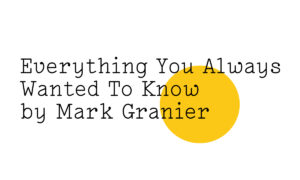 Everything You Always Wanted To Know