Charlotte Gann talks about her new project, The Understory Conversation, which sets out to provide small safe places where like-minded creatives can come and play, connect and create

I like making connections! Each morning starts for me, when everyone’s busy doing their Wordles or whatever, with clicking on The Far Side site to see the day’s Gary Larson. One cartoon on the day I first started thinking about this piece showed a hunter and a moose fighting. The caption read ‘Carl shoves Roger, Roger shoves Carl, and tempers rise.’ It immediately made me wonder if Larson had psychologist Carl Rogers in mind when he chose these names? (I love his choice of names as much as any other single thing about these cartoons).

Anyway, following that thought, I saw the cartoon as about two parts of one self in conflict. And Carl Rogers is all about congruence, as I understand him: the closer we can get to a congruent life – i.e. living as we are on the inside, on the outside – the more fully functioning he’d describe us. This feels relevant to me when I think about The Understory Conversation. It’s really come about from having felt I’d led two parallel lives.

We do not want to know about the rocks.
Of course, occasionally someone disappears
but it’s better, safer, to keep things

as they are. Imagine what would happen
if we lit up this stretch of water? The dark
would come alive with shapes and creatures.

The rocks would rear up jagged. We’d see
how deep the water really is: those
lonely fathoms. Besides, just think,

what might we glimpse below the surface?
lost faces – imagine? The fright! Don’t fret.
People drown silently most of the time.

(from The Girl Who Cried)

That was a poem I wrote between my two books. The spark for it was noticing that the word ‘apprehension’ meant both to fear something, and to grasp or understand it. The poem came in quite a burst and with a lot of energy. I sent it off to The North, and they accepted it. It felt an important poem to me. HappenStance publisher, Helena Nelson, later chose it as the poem she put on the back cover of The Girl Who Cried. And it has felt a bit of a manifesto poem, since, for me.

I know it’s dark, and bleak. It has this strange ‘We’ voice in it that isn’t the poet’s voice or perspective but some kind of collective, societal-even, ‘we’. The poem emerged very strongly with, or in, that voice. It was the kind of poem where I wrote what I didn’t want to believe is true as a way of pushing back. And what I’m pushing back against, I think, is our collective tendency to leave difficult things un-talked about, hidden, cloaked in shame.

I first used the term The Understory in a blogpost after publication in 2020 of The Girl Who Cried. I talked about how, all my life, I’d felt I was living a double life: the one visible and talked about; and the private suffering, behind the scenes. I’d had a pretty stable life, on the outside. Coming from a white middle-class (big family) background, I grew up in the South East, moved to London as a student, then worked as an editor in magazines. Things were fine – I got on seemingly well, getting (modestly) promoted etc as I went.

There was a big but.

Behind the scenes, and internally, was a very different story. One that rarely got spoken about.

My first collection, Noir, emanated from years of exploitation during my late teens and early adulthood. I called the book Noir because the secrecy and shame bound up in that whole experience was so fundamentally a part of it and was, I think, at least as damaging as the abuse itself. The Girl Who Cried came second. This was a book I couldn’t really even describe, but it came straight out of my Understory. How all my life, really, I’d nursed a small child desperately searching for something she needed behind the scenes. In both, I feel I went inside and gave bruised and silenced parts of myself permission to ‘speak’ (however surreal that might sound). My favourite books had paved the way, and when I felt uncertain I would read Patrick Hamilton’s work, especially Hangover Square, and feel reassured that I needed to write precisely what I needed to write.

So, after all this – and partly at least in support of the (lockdown) publication of The Girl Who Cried – I found myself writing that blogpost, about me and the Understory, and posting it on Facebook. I think I had the tag something like ‘Am I the only one with an Understory?’ Some others responded; or they responded to shares of the post. Already, I got that sensation: less aloneness.

I first used the term the Understory in a blogpost after publication in 2020 of The Girl Who Cried. I talked about how, all my life, I’d felt I was living a double life: the one visible and talked about; and the private suffering, behind the scenes

I’ve had this before, of course, at times. With my closest friends; or in therapy or personal development settings (there’ve been a few – a fire walk in the Welsh hills one night back in 2000 springs to mind). And I felt it when people responded personally (amidst all the silence) to my poetry collections. But rarely had I felt able to speak so openly publicly, and feel heard.

Excited, and curious, I invited a small group of poets to a one-off online ‘conversation’ about the Understory. I barely knew some of them; geographically, we were widely spread. We met, we talked. We all found it stimulating. We ‘brainstormed’ how a group of writers meeting around the theme of the Understory might work. We were all interested, and we formed the first guinea pig group.

That group is still going strong fifteen months on. We meet roughly every three weeks; and are now in the throes of planning our first in-person residential, in the Peaks this June. Over the last year, I’ve formed a couple more regular groups, and been working with a handful of individuals in one-to-one ‘Understory Conversations’. It all feels rich, and strong; and seems to be evolving organically.

In the midst of all this, I was going for regular walks and talks with poet pal and local ally Sarah Barnsley. And she was – is – also in the founding group. Sarah works full time as an academic, so I’m the main lead on The Understory Conversation, but she’s formally joined me, as Contributing Editor. And my two sons have kindly helped by creating our website.

It almost immediately became apparent to me that the Understory intuitively meant different things to different people, and that that was no barrier. Indeed, it was an enrichment. One person talked of bringing her ‘share of chaos’ to one meeting: I loved that image, and still do. It manages to capture both the ‘chaos’ and the containment, which form the heart of The Understory Conversation.

The poet, in writing, provides both the holding space and the play for herself

Someone recently suggested in a group, that the Understory is simply ‘the place or space we write from’, and that absolutely gels, too, for me. The space from which we write, filled as it may be, too, with all our personal reasons why. As Carl Rogers also says: ‘As no one else can know how we perceive, we are the best experts on ourselves.’

For years now, I’ve thought of my own writing as a developmental as well as creative practice: that I write in a ‘potential space’, and that that is inherently beneficial. This is one central framing I took away from my MA in Creative Writing and Personal Development at the University of Sussex more than a decade ago, where I read Carole Satyamurti’s essay ‘First time ever: writing the poem in potential space’. It’s an idea that comes directly from Winnicott’s work in child development: that the child (or adult poet) needs a safe space in which to ‘play’, overseen by a holding mother who doesn’t interfere. The poet, in writing, provides both the holding space and the play for herself.

Again and again in my work, I’m drawn to the image of rooms and ideas of there being, or not being, ‘room’ for us. Here’s one poem where the ‘I’ can’t get ‘inside’ at all:

The house with no door looks welcoming,
with its wisteria and robins. I can see,

through the kitchen window, a bowl
of cherries. They’re the brightest, darkest,

shiniest cherries. But that window’s shut
and bolted. I move on round. I know

I shouldn’t walk on flowerbeds.
I keep thinking the door must be around

the next corner. I’ve lost count now
how many times I’ve circumnavigated.

(from The Girl Who Cried)

(I also love the fact poems themselves are like tiny rooms on the page.)

Well, The Understory Conversation, in its way, sets out to provide exactly that: small safe rooms (hopefully abundant with bowls of cherries!) where like-minded creatives can come and play. And by play here, I mainly mean connect. Make connections. That, I think, is the key. Connection – authentic, imperfect, committed connection – is making a world of difference to me. In simply being, and trying in good faith to write, to meet as whole people, to listen, and to talk – that, in itself, is what is making such a difference to my personal internal experience. It’s subtly so, but it’s real.

At times, when the connection’s going well, when I feel open, and that others are open too, and we’re in a working group or system, I feel something shift in my chest. Like a rusty old door creak open. A physical sensation. I want more of this!

We plan to go on experimenting, and developing. We hope to form new, fixed, ongoing, small groups periodically, so do get in touch if you’re reading this and you’re interested, and we’d love those to include as much diversity as possible, including different kinds of artists … anyone with a committed creative practice and a genuine interest in engaging. We’ve also started publishing what we’re calling ‘sample conversations’ on the website, in our Understory Common Room. Again, please feel free to have a browse, to get a flavour.

Increasingly, I feel like my life on the inside is closer to my life on the outside (to return to Carl Rogers and that ‘self at war’ at the start). For me, this feels vital and, perhaps, the very heart of The Understory Conversation.

Charlotte Gann is an editor from Sussex. She has an English degree from UCL, and an MA in Creative Writing and Personal Development from the University of Sussex. She lived in London for years, working as Editor of Health Which?, among other roles, then moved to Brighton and had two sons. Her pamphlet, The Long Woman (Pighog Press, 2011), was shortlisted for the 2012 Michael Marks Award and her two full collections, Noir (2016) and The Girl Who Cried (2020) are published by HappenStance. She’s a freelance editor, and helps on Sphinx Review. 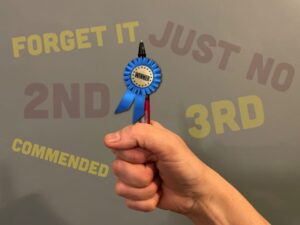 Feature: The Frip asks is there such a thing as the "competition poem"?