The page my barrow and my charge the word

John Challis certainly has a subject, and it’s a rich and interesting subject that allows for a variety of cases. It’s something like this: the history of labour and the way this history shapes our cities (especially London) and our consciences (especially the author’s own).

This subject is directly outlined in the not-quite-title poem, ‘Resurrectionists’. A resurrectionist was a body snatcher, with a particular market for his swag, namely anatomical education and research. Likewise, Challis’s poetic purpose is to unearth past lives, and study their components. As the second section of ‘Resurrectionists’ puts it:

I too feel the urge to make something
out of nothing and profit from this work:
the page my barrow and my charge the word

This is quite closely reminiscent, it seems to me, of “I’ll dig with it”, and, indeed, among the workers Challis writes about is his father – not a farmer, like Patrick Heaney, but driver of a black cab, a quintessential London trade.

The collection title adds a definite article to this manifesto poem’s title so as to signal, I presume, that many other poems enact a similar process. Sometimes the process is, literally, disinterring, as in ‘Plague Ground’ which digs down in three parts of two quatrains each, titled 2013, 1665 and 1348, through the layers of earth and history when “At Farringdon Crossrail my spade struck / neither leather ball nor ceramic bowl, / but a seventeenth century plague victim’s skull”.

A resurrectionist was a body snatcher, with a particular market for his swag, namely anatomical education and research. Likewise, Challis’s poetic purpose is to unearth past lives, and study their components

The river Thames itself works a similar trick, so the poem ‘Thames’ informs us: “to get its nose beneath the grave, / then flips the past up like a coin to send afloat/ its drowned possessions: Anglo-Saxon ornaments, / unexpected payloads, bone dice and oyster shells, / wedding rings and number plates.” Poet as mudlark.

More often, the digging is merely figurative. A very successful example, is ‘Advertising’, in which the author looks down on the meat workers in Smithfield Market, but only spatially, from his very different workplace.

All night they have been touching meat,
thrusting trollies stuffed with cheek,

I watch them from my office vantage
stripping their overalls. I button up
my collar for handshake after handshake

A couple of these workers feature on the book’s black and white cover photograph, and Challis (or at least the poem’s narrator) seems somewhat humbled by the contrasts between their necessary work and his own. This modesty, and this genuine respect for the workers whose different lives he observes, are attractive aspects of Challis’s poems.

Similar to ‘Advertisement’, in both setting and attitude, is ‘Gift of the Gab’ which introduces the author’s grandfather as a market worker, and wonders more directly about what has and has not been inherited, what has been lost with the changes:

It should be in my blood
his knack for selling, his spiel and patter,
but I’m more at ease with the cleanliness

of what the market has become.
An emporium of artisan: bistros,
vintage clothes and specialist obsessions

Alongside these poems of history and work are some vulnerable poems about new fatherhood. No harm at all in such a digression, in my book, and it could be justified in the poet’s book by the poems about his own grandfather and father.

So much for themes; what are the poems’ formal and tonal properties? The forms are pretty consistent, I would say, though not terribly important in characterising the poems. Apart from a few sonnets, most poems are laid out in stanzas of equal length, though the length varies widely, from couplets up to nine-liners. This seems to me primarily a visual device rather than anything deeper: as in the two tercets from ‘Gift of the Gab’ quoted above, between-stanza enjambments are frequent, so that the stanzas only rarely act as paragraphs or thematic units.

There is nothing glib here, and the absence of irony, even when being critical of contemporary environments, generates a sincerity that is in keeping with the poet’s misgivings about modernity, and with his warmth towards the city and its workers.

The sentences are full and well formed, often quite long. The poems seem to me always to be carefully and skilfully constructed at this level: they are satisfyingly variable in syntax and diction. One way in which sentences are lengthened is with noun phrases that comprise long lists of names. It’s as if the poet feels that the best way to be true to the scene he is describing is to inventory its contents, or possible contents. My own view is that, sometimes, accuracy is being won at too high a cost to forward momentum. But then again, perhaps completeness is important to the mission. There is nothing glib here, and the absence of irony, even when being critical of contemporary environments, generates a sincerity that is in keeping with the poet’s misgivings about modernity, and with his warmth towards the city and its workers.

Stephen Payne is Professor Emeritus at the University of Bath, where until September 2020 he taught and conducted research in Cognitive Science. He lives in Penarth in the Vale of Glamorgan.  His first full-length poetry collection, Pattern Beyond Chance, was published by HappenStance Press in 2015 and shortlisted for Wales Book of the Year. His second collection, The Windmill Proof, was published by the same press in September 2021. 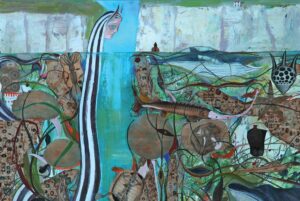 Looking for the ones who will never be found