A soft labyrinth of signals

The title poem of Imogen Forster’s pamphlet The Grass Boat was chosen by Hugh McMillan to be included in Best Scottish Poems 2021, for which twenty poems are chosen, by a different editor each year, to provide a personal overview of a year of Scottish poetry. In the poem the narrator, a child, plays in a field with three friends, and sees they have:

[…] made an outline in the grass,
the space a little rowing boat would fill.

All four of us can comfortably
lie between its sides, summer’s
dry sea waving above our heads.

It’s a beautiful conceit. As McMillan says in his commentary on the poem, Forster “captures the child’s eye view of the world, with its insecurity and fear, and also its sense of mystery and magic. The image of the grass boat is a powerful and all encompassing one: the voyage we must all make, in the vessel we all create.” The poem ends:

I’m unafraid to leave the place
behind, to think there may not
be a boat when I come back. I have learned

a thing can both exist and not exist;
I understand I have created for myself
this boat, and that I’m sailing in it.

Forster grasps and conveys to us the power of a child’s imagination, the revelation of metaphor, and the sense of being set apart, being special, by dint of having a particular understanding. She says that the poem, “records a moment when I became aware, in a way painfully, but with a feeling of private excitement, that I saw something that my companions did not, and that this experience was to be valued and that it would be significant for me in the future. ‘Sailing’ in this context means to capture, to breathe life into an observation or an experience.”

This poetry is precise, careful and assured

The poem sets the tone for the pamphlet. This poetry is precise, careful and assured. Forster’s playfulness and love of language shine out, both from the use of specific words (I had to google ‘puddocks’) and delightfully descriptive phrases – a shield bug is a “a jewelled pillbox”, and minnows flash “tin-bright like lures / or a child’s whirling toy”. In the poem ‘The Puddocky Burn’, “Balsam’s pink bonnets / birl downstream” and a heron’s feet are “two bunches of loose keys”. In ‘Drummer’ she builds up a veritable crescendo of onomatopoeia, with:

The kiss, the smack, the slap, the kick,
the hot colours and the steady percussive drive
of backbeat and ride. The crisp electric flick
from the hi-hat to the crash and the splash,
turning in the half-moon of cymbal and gong […]

This is fun, and showy, but more generally there’s an underlying musicality to Forster’s phrasing. And she knows where to break a line; For example in ‘Leveret’, where she finds a dead baby hare on the road, the last four lines seem to me to be extremely finely turned.

I hear a tractor, and so that it is not
burst open under the high roaring wheel
I shoe it into long grass, seeing it now
as itself, this hare, four inches long.

Forster manages to convey a great deal with real lightness of touch. In ‘Family Photo at the Mine’ she flags up the direction in which the poem is heading early on, but I didn’t realise it until I read it again. The narrator visits a worked-out mine, “the sides abrupt, as sheer as if / a toothed machine has bitten / out a core and swallowed it.” The summer heat is “lifeless”, she knows “you cannot swim”. The specifics are not spelled out, but we are in no doubt that there is tragedy waiting in the wings. And in ’An Evening Incident’ she watches from the window of an upstairs bar while a man is arrested by the police. The poem opens:

Rain sluices the windows of this upstairs bar,
dead leaves swirl from the churchyard, fall
on the slate roofs of the National School,
the Church Hall. A line of flags, damp remnants
of summer, stir and snap on their poles.

I like this a lot – the careful scene setting of rain, dead leaves and limp flags, the full rhyme (fall / hall) and half-rhyme (poles / School / swirl / stir; rain / line; sluices / roofs) which mesh it all together, the desultory, slightly ominous tone. And then, “On the pavement below a man is being arrested […] with a procedure I can only vaguely imagine.” He seems “unembarrassed, unashamed”, which is interesting in itself, but now the narrator has put herself in the picture to tell us how different their worlds are, the man outside in a shirt “too thin for the time of year” and she in a “warm room that smells of beer and coffee”. The focus is on “the distance between us”, and while little is actually said, much is implied.

These are quiet poems which are nonetheless insistent

And Forster writes particularly evocatively about childhood, and the adults who peopled hers, “the butcher, / fat-fingered Mr Bond”, Grandpa with his fingers “contracted into claws, unable / to grasp a tool’s handle”, Great Uncle Jack who was a “gambler, joker, tease”, and the entire cast of ‘Ubi Sunt?’ (‘Where are they now?’), from Beattie of the apple shop to the Misses Peach, “their white hair that / smelled of pot pourri, their vases, full / of dried honesty and blue sea lavender.”

These are quiet poems which are nonetheless insistent. What does Forster insist upon?  In ‘Haulm and Shaw’, ostensibly about gardening, and family or local gardening terms, the answer becomes clear:

[…] grubbing up this small
potato crop with my bare hands
I claim ownership, the right to use
what will otherwise rot down
to make another season’s tilth.

In claiming ownership of her “small … crop” it seems to me that Forster is claiming a place for herself in the conversation of poetry, passed on from generation to generation. She’s asserting her right to get her own hands dirty, to be a part of the onward process, and to make something of her own, out of our shared poetic heritage. And beautifully so:

Now the bed’s turned, raked, friable
earth ready again for seeding, ripe
with worm-life. It could be a grave,
neat, carefully tended, hospitable
to generation, to generations.

Hilary Menos is editor of The Friday Poem. Her first collection, Berg (Seren, 2009), won the Forward Prize for Best First Collection 2010. Her second collection is Red Devon (Seren, 2013). Her pamphlet, Human Tissue (Smith|Doorstop, 2020), was a winner in The Poetry Business Book & Pamphlet Competition 2019/20. Her most recent pamphlet, Fear of Forks, is out with HappenStance Press. 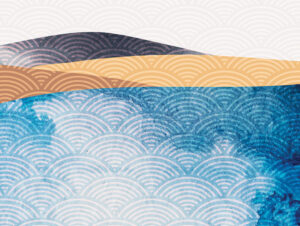