Maggie Mackay looks at pamphlets by winner Alycia Pirmohamed, runner up Colin Bramwell, and the five shortlisted poets in the Edwin Morgan Poetry Award 2020, and finds out what they have done since

Edwin Morgan, Scotland’s first modern Makar, was appointed in 2004. He was and is a substantial figure in the Scottish poetry world. An innovative thinker and generous champion of new talent, when he died in 2010 he left a bequest towards the creation of a biennial award for poets aged thirty or under who submit an unpublished collection. He wanted new voices to enjoy the gift of time to focus on writing. The awards — £20,000 for the winner, £2,500 for the runner up and £1000 for shortlisted poets — are evidence of Morgan’s desire to enable progress and fresh perspectives.

The judges in 2020, the centenary of Edwin Morgan’s birth, were Kathleen Jamie, the newly created Makar, and John Glenday. They announced their choices during a presentation event at The Edinburgh Book Festival in August last year. To my delight, after listening to the readings, I predicted the winner, Alycia Pirmohamed, a Canadian-born poet of Indian heritage, now based in Scotland. She read from her successful collection The Ghosts that Visit Us when We Dream.

Alycia Pirmohamed is currently a postdoctoral Creative Writing Fellow at the University of Liverpool, where she is working with the Ledbury Poetry Critics programme. She received an MFA from the University of Oregon and a PhD from the University of Edinburgh where she studied poetry written by second-generation immigrants. Her pamphlet Faces that Fled the Wind was selected by Camille Rankine for the 2018 BOAAT Press Chapbook Prize. She was the winner of the 2020 Pamet River Prize and her debut poetry collection, Another Way to Split Water is forthcoming with YesYes Books in 2022.

Alycia Pirmohamed’s debut pamphlet, Hinge (ignitionpress, 2020), addresses themes around identity. She interrogates the consequences of migration and reflects on the tension between tradition and the new, on ancestry and on the meaning of home. Her vibrant, moving poems express a sense of fragmentation through the use of white space and the imagery of dangerous and enchanted places such as forests and unexplored paths. She maps her probing journey over crossings and terrain in delicate and powerful imagery. Her poetry provokes much self-reflection.

In ‘Homeward’, a poem in couplets, the lines recollect a father’s migratory path towards the Canadian coastline, following his dream. We sense her loss, the breaking of an ancestral cord.

[…] Your father is where the act
of missing something first took root.

The poem sings with the beguiling language of home: of a ‘‘windrose pointing home’’ and ‘‘bloodlines’’ shared with strangers. The lines draw the reader into the narrator’s struggle as she grapples with an identity fractured into two halves.

In the poem ‘Welcome’ Pirmohamed explores different definitions of what it is to be part of a community. In this stunningly complex piece she takes us through a mysterious forest, across an illegal border and into the alienating experience of being in the West, post 9/11. So many crossings and gaps. Origins are fractured: ‘‘You can no longer tell if you are heading forward / or backward, save for the numbers ticking down’’.

That desire to belong emerges in the poem ‘Elsewhere.’ There’s a hesitancy sown through the language of “unfamiliar, dark, needled forest’’; there’s fog and magical shapeshifting imagery — wild deer, line of crow, a body shaped like a river. The search for belonging motivates the odyssey within Hinge.

‘House of Prayer’ is written in one of my favourite forms, the ghazal. It cradles a haunting chant, ‘’alhaamdulillah’’, repeated in each couplet, evoking the very essence of pure love both for the Creator and the biological father. Muslim heritage blends with a Western upbringing. It’s a prayer and a longing deep in the soul; a piece of music.

In ‘On My Tongue’ the narrator struggles to take command of Arabic, as her second language, English, is more natural. She likens herself to a bird yet she is constrained in her attempt to recite passages in the Qur’an. All this, despite her first memory of its “dark green cover’’ when she was “hardly eight years old.”

I loved the delicacy and nuance of Hinge. Such an appropriate title for poems which examine the connecting link between the ancestral home and the lived experience in a new culture.

Since Pirmohamed won the Edwin Morgan Poetry Award, she has worked with fellow writer Pratyusha to create a collaborative pamphlet, the beautifully designed Second Memory (Guillemot Press, 2021). It’s a blend of meditative prose and prose poetry exploring ancestry and ghost memories of their heritage. The pieces have been termed’ diaspora epistles’. I’ve not read such original beguiling writing before.

I learn to pull the signified from the mouths
of other women who once looked like me. […]

She speaks of an ancestor who is a ‘‘lime green ghost’’, the trauma of seeking her grandmother’s grave which may have fallen ‘‘into a river’’. We hear of other rains, other bodies, the desire to be kind as an antidote to brutality. Second memory resides in the ‘‘sediment of my childhood’’, ‘‘in blurred visions’’. Ancestors emerge from forests, ‘‘washed in dark green’’. Pirmohamed is deft in the way she uses the forest image to realise enchantment, mystery and tension. Second Memory is a remarkable adventure into sensations, lineage and philosophy.

Colin Bramwell is a poet, performer and musician from the Black Isle, in the north of Scotland. Currently, he is working towards a PhD in Scots and literary translation at the University of St Andrews. His poetry was twice-shortlisted for the Wigtown Poetry Prize in 2019, and has been published in Gutter and The Speculative Book, among other places. He is an active member of the Scottish live poetry scene, and has been invited to perform at most of the major poetry nights in Scotland, including Sonnet Youth, Loud Poets, Vespers, and Poetry at Inn Deep. He has also performed his work at the Edinburgh International Book Festival and StAnza. He has written and performed four spoken-word theatre shows at various festivals, including the Edinburgh Fringe. On occasion, Colin can be found performing poetry with Beats on Book, a Manchester-based jazz and spoken word group.

He says, “From the get-go, I wanted to be the kind of writer who works (1) between literary genres, and (2) with a strong sense of rhythm and melody. The choice to base my practice on poetry was consciously-made. Although I was attracted to it by its ability to come close to the unspoken, I wanted more than anything else to speak it. If you want to be an artist, you have to serve your apprenticeship somewhere. My apprenticeship (and my somewhere) was, and will always be, poetry. Unless, God forbid, I learn to write songs, or novels, or anything else that pays better.”

Colin Bramwell was runner up in the Edwin Morgan Prize with his collection, Jigsaw. His subsequent pamphlet The Highland Citizenship Test (Stewed Rhubarb, 2021) offers an exciting insight into his inventive mind. It is performance poetry on the page. It also compliments Pirmohamed’s writing.

The jigsaw inherited in the poem ‘Jigsaw’ leads us into a relationship with memory. Each tercet evokes film shots of Prestwich Beach; “a  bearded collie’’, “a buttercup sky’’. But none of this seems real. These images are fake and sentimental. Meanwhile, the presence of a living mother “gives you an earful’’ and we hear the weight of “heavy footsteps on the upper floor.’’ Bramwell plays rose-tinted remembrance against the here and now.

The eponymous poem written in Lowland Scots throws a series of nonsensical questions at the reader. It adopts a satirical swipe at the UK citizenship test and centres around a couthy Harry Lauder set of reference to Scottish places, speech and habits. Absurd, surreal and impossible for me to answer. An articulate and thought-provoking swipe at the hostile environment.

Bramwell remembers a childhood toy in his villanelle ‘The Lost Elephant’. It reads beautifully with a powerful sense of loss. The elephant repeatedly appears in the narrator’s dream ‘‘that I have lost you in my home’’. A seminal figure of this childhood, “my homophone’’, the sense of loss is profound as the narrator crosses “another mountain pass alone.’’ Nothing sentimentally fake in these lines.

Awards of £1,000 were given to each of the remaining five shortlisted poets: Stewart Sanderson, Michael Grieve, David Linklater, Paul Magrati, and Kirsten Kerr.

Stewart Sanderson is a poet from Glasgow, currently based in the West Midlands, where he works as a local authority Arts Development Officer. The recipient of an Eric Gregory Award, as well as Robert Louis Stevenson and Jessie Kesson Fellowships, he has had two pamphlets published by Tapsalteerie, Fios (2015) and An Offering (2018).

An Offering by Stewart Sanderson draws me fully into the sensory nature of my Scottish identity. Places and the Scots language resonate with me. The rich texture of poems such as ‘Hut Circles’, ’Iona’ and ‘The Edge of Things’ engages my political thinking. Equally, the micro detail of landscape and my familiarity with it all takes me on an emotional journey.

Luck by Michael Grieve is a different creature, though no less absorbing. It’s a single-poem pamphlet. In Luck we enter the mindset of a player, a man who gambles with his life. The narrator longs to escape the desolation of drug dependency and boredom. I long for him to move on to an authentic life.

Grieve lives in Fife where he works as a bookseller. He is a graduate of the Universities of St Andrews and Cambridge, and his work has appeared in The Scores, Magma, and Perverse.

David Ross Linklater is a poet, originally from Easter-Ross in the Highlands, but now based in Glasgow. David’s pamphlet Black Box was published by Speculative Books in 2018. Black Box was illustrated by Tobotix

David is a graduate of the MLitt in Creative Writing course at the University of Glasgow. He then went on to receive a Dewar Arts Award and was shortlisted for a New Writers Award from the Scottish Book Trust in 2015.

Paul Malgrati is a poet and academic from France who has lived in Scotland since 2016. He writes  in Scots and French. His debut collection, Poèmes Ecossais will be published by Blue Diode Press in 2022.

Kirsten Kerr is a Glasgow-based poet, originally from Aberdeen. Writing about people, nature and place, her poetry often returns to that wee glint of magic in the everyday.

Maggie Mackay loves family history, winding it into lyrical poems in print and online journals such as Ink Sweat &Tears, Prole, Spelt, Southlight and in several anthologies, including ‘MeToo’ and ‘Bloody Amazing!’, both winners of Sabotage Awards. Her pamphlet The Heart of the Run was published by Picaroon Poetry in 2018 and her collection A West Coast Psalter, Kelsay Books in 2021. The Poetry Archive WordView 2020 awarded her poem ‘How to Distil a Guid Scotch Malt’ a place in the permanent collection. She is a MA poetry graduate of Manchester Metropolitan University and a reviewer for Sphinx Review. 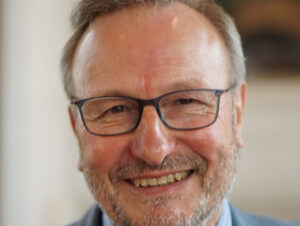 We certainly like our poets to be challenging in what they say but perhaps less so in how they say it!

Feature: The Friday Poem talks to Mike Bartholomew-Biggs from London Grip about poetry reviews, London Grip New Poetry, Poetry in the Crypt and the joy of maths