We chose Graham Mort’s poem ‘The Day Cattle Broke Through the Fence at the Outbreak of the Ukraine War’ to be our Friday Poem this week because we really like the way the rustic realism gives way to a brief outburst of the surreal. The combination of blue eyes and yellow ear tag, and the young bull’s encroachment onto foreign pastures, tell us what it’s all about — if only real life were as simple as the bull choosing to return to its own territory. It’s a poem that works on a number of levels, and we like it.

They were Belted Galloways, black with milky
cummerbunds, grazing in the field below gardens
between mole hills and thistles above the beck
that seemed absorbed in its own language.

She looked up and there was the bullock — one
of last year’s progeny — snatching at grass this
side of the barbed wire fence. Barbed wire had
tamed prairies but today the bull had somehow

stepped over it or between it with its yellow
ear tags dangling — a drunken dancer at a tipsy
wedding. So now there were cattle in the gardens
instead of in the meadow. Everything seemed

disordered and when she approached, backing
it against the fence, the bullock was spooked
and reared back throwing clods of soil from
its hooves. What to do? She turned her back

its rustic polka and was in the field again
heading towards its family, snorting disdain
its hide a haunch of pure night
its white sash laundered by the sun.

Graham Mort lives in North Yorkshire and writes short fiction and poetry. Visibility: New & Selected Poems appeared from Seren in 2007, when he was also winner of the Bridport short story prize. His book of stories, Touch, won the Edge Hill prize in 2011. Black Shiver Moss (poems) appeared from Seren in 2017. Like Fado and Other Stories, a new collection of short fiction, was published by Salt in January 2021 and was longlisted for the Edge Hill Prize. Samara, a poetry pamphlet illustrated by Claire Jefferson, was published by 4Word in 2021. Graham Mort’s website is here. 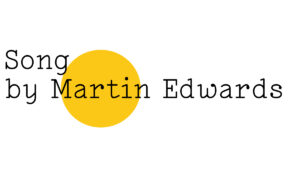