The cruelty and largesse of high water

If you’re a fan of Richie McCaffery’s writing – and why on earth would you not be? – and if you keep up with the man’s busy publishing schedule – and why wouldn’t you try? – then there’s a strong chance you could be disappointed by Summer / Break, coming, as it does, relatively hot on the heels of two pamphlets in two years – First Hare from Mariscat Press in 2020 and Coping Stones from Fras Publications in 2021 – and containing, as it does, large chunks of work from both.

But dig a little deeper and we can see that Summer / Break isn’t just a cut and shut of the two pamphlets. McCaffery is also a serious reviser and tightener of his work.

Take, for example, the poem ‘Ventriloquist’. It’s a poem about someone hiding while their peers have gone out to work for “playboy dukes”, someone who labels themselves “the best of their kind” at being the “runt”. (This doesn’t feel like a boast at all – quite the opposite.) In Coping Stones the poem was titled ‘The inverted ventriloquist’. In Summer / Break it has been transformed. It was five tercets, now it’s three tercets and a quatrain. The last two lines of the final stanza have been cut, so that what once read:

asked me to repeat myself five times
The way they close their eyes, lean in,
is like trying to hear the cries

of dead ancestors deep in the earth.
My beliefs go down like anchors
that never quite find their purchase

asked me to repeat myself five times
The way they close their eyes, lean in,
is like trying to hear the cries
of dead ancestors deep in the earth.

By removing these lines, and with them the slightly incongruous reference to anchors, the poem has been made stronger. More importantly, it has also caused the poem to take on some element of hope, or, if not hope, then at the very least a sense of kinship with the poet. The emphasis is now placed on the ancestors rather than the anchor, and it begs the question of whether it is his ancestors they want to hear, or their own.

From the get go, it’s evident that this is a book about the dissolution of a relationship

Elsewhere, McCaffery has created a new poem by merging two others together, one from each of his previous pamphlets. Both original poems were called ‘Stef’, and they are brought together to form a two-part poem under the same title. The sum of the parts create something greater as a result.

From the get go, it’s evident that this is a book about the dissolution of a relationship. ‘Out Of The Blue’, the italicised first poem that precedes the collection’s three sections opens with:

She left me at the height of nesting season,
birds building while I was dismantling my home.

She left me as brambles we’d planted were fruiting,
their berries tart like the metal of front door keys.

The collection follows a chronological order of sorts, with the ‘Summer’ section describing a relationship in full flow, a couple that have grown together. The opening poem is the title poem from Coping Stones, and harks back to the final poem of his previous full collection with Nine Arches Press, Passport, which closes with:

Today I’m turning a corner,
its house has curved windows,
the stone is solid and rounded
and something to behold.

To open Summer / Break and find a first poem (setting aside the prologue of ‘Out Of The Blue’) that at surface level is about stone work is something we should applaud. As he says in ‘Coping Stones’: “I remember seeing the foundations / and crypt of a medieval church / built from rubble of a Roman temple”. While this poem is not “building on rubble” it is at least building and moving on from the last collection, as well as describing a relationship that feels strong, one that could “salvage / the top stonework” of that rubble “to make a home / where we could weather it out”.

And “weather it out” they do, whether it is the impact of Covid 19 and its attendant lockdowns, as described in ‘Anchor’, or the seeming mundanity of ‘Circadian Rhythms’ and its tribute to Donald Hall’s poem ‘Summer Kitchen‘ (McCaffery says it’s ‘Summer Kitchen’ here on his blog, although, I think there’s a nod to Hall’s ‘An Old Life‘ in there too). Both McCaffery’s and Hall’s poems describe and celebrate a day of sheer simplicity. Little happens, yet these are the very days we should be most overjoyed with.  As McCaffery has it, ” Most diaries would have had it blank, that day. / We woke late, you fed the cat, I the birds / then we made breakfast together.” before going on the describe a day that ends with them both “asleep within minutes” – no cares, no pressures, no worries. Would that every day could have some of this.

These poems would appear to have been written since the collapse of his fourteen year relationship, and they deliver some pretty coruscating levels of self-analysis

The section ends with three simple sentences in the form of ‘Lighthouse’. The poem describes a picture hung on the wall of a bedroom of a “lighthouse in a tempest.” The poem ends with the lines:

It is drawn in such a way
to imply that the onlooker
is deep in the eye of the storm.

McCaffery manages here to both set us up for what is to come, suggesting that we are in the calm before we move through the storm and out the other side at the end of the book, and also cleverly manages to position us, the reader, as onlooker.

In some ways the  second section of the book, ‘/’, is the eye of this particular storm. It looks beyond the poet’s romantic relationship and focuses on other relationships, notably with his family, old school friends and former-friends, teachers, nephews and uncles, and also at his relationship with himself.

It opens with a poem called ‘Dobbin’ about a painting of “an old sorrel donkey” made by his grandmother. The poem sets up a division in the sense of it being separated by time – we have McCaffery in the present looking back at a picture made in 1998 – but there are further seeds of division sown. We’re told that his grandmother’s husband didn’t much like her ‘daubs’. It’s pretty dismissive to be calling someone’s art a ‘daub’, but she also couldn’t sell the painting, so a younger McCaffery tries to buy it. The painting clearly means something to McCaffery as it has travelled “from wall to wall” over the years. He still he finds something to look at in it, which raises questions about what art can mean to us, about individual taste, and whether beauty is in the eye of the beholder.

In the eight short lines of ‘Bearings’, the poet manages to take a brutal stock of himself. Building on the idea of staying still when you’re lost in order to be found, the poem closes with:

Here I am in my mid-thirties, lost again
even though my location is clear.
I’m staying still in the hope
of being found for real.

Devastating as that is, there is at least hope – literally in the third line of this stanza, but also in the sense of wanting to be found. It’s a simple poem, but a powerful one.

The final section of the collection is called ‘Break’, and this is where we find most of McCaffrey’s new work, with only the book’s final poem ‘The Crab’ having been drafted in from elsewhere. These poems would appear to have been written since the collapse of his fourteen year relationship, and they deliver some pretty coruscating levels of self-analysis. It’s hard reading as McCaffery charts his high points and good points, and interweaves this with some self-recrimination.

In ‘The Gift Of The Gab’ he describes his ability to talk himself out of some tight situations – he manages to avoid being mugged in Morocco, and is even “invited to my attackers for tea”, but in the final stanza the positive side of this trait is outweighed by a perceived fault:

I once talked my parents down
from divorce, but I failed to change
your mind about leaving.

The break between the final two lines – leaving us hanging on “I failed to change” – would have been pretty damning without the final line, but overall the poem is still a brutal assessment. Does it create a tension around the idea of actions speaking louder than words? Hard to say. There’s no significant evidence beyond the line break, but we all know a line break can carry a lot of weight.

It’s hard reading as McCaffery charts his high points and good points, and interweaves this with some self-recrimination

Speaking of which, in the poem that follows this one, he describes the origin of his own surname, how it comes from “a Gaelic patronymic meaning / ‘the son of the jockey'”, before going on to set up differences between himself and his former partner: him not caring for horses, her loving them despite having been thrown from one. As the poem closes he describes her as “trying to get back into shape”, of losing weight after their separation, and that this weight is in fact himself: “even if that weight might be / me, the son of the jockey”.

The section continues with further poems in this vein, the son of the jockey never giving himself an easy ride, before we reach the penultimate poem, ‘After The Storm’, which harks back to the lighthouse at the end of the first section. The first line runs on from the title and reads:

came another storm and then another,
seasons gave way to the dong of chainsaws,
the cruelty and largesse of high water

Storms and high water kill off trees, wreak havoc and make the area unsafe to travel in: “You could tell the truly faithful as those / who still travelled by public transport”. But by the end of the poem there is a sense of acceptance of the situation, a readiness to deal with it, some sort of resolution with: “How / I felt love for something that can’t feel love.” I choose to read this with a positive slant, to mean he has moved through and on, and is learning to love the chaos and, dare I say it, himself too.

Mat Riches is ITV’s unofficial poet-in-residence. His work’s been in a number of journals and magazines, most recently Wild Court, The High Window and Finished Creatures. He co-runs the Rogue Strands poetry evenings, reviews for SphinxReview, The High Window and London Grip, and has a pamphlet due out from Red Squirrel Press in 2023. Mat Riches blog Wear the Fox Hat is here. 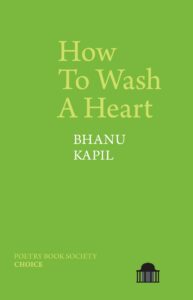