In the end it was a matter of woodworm

‘Restorations’ seems by the end too positive a title, if not intended ironically. It needs a question mark, at least. ‘Restorations?’ would be more appropriate for poems that spend much more time with uncertainty, vulnerability and instability than with anything so affirming as ‘restoration’ seems to promise.

This collection is obsessed (materially) with layers, borders and surfaces, and as a consequence (experientially) with ambivalence, porosity, guises. The emphasis is on flux; processes eclipse states, and material stuffs are often introduced seemingly just to watch them fade, crumble and peel. From a neutral perspective decay, after all, is just another form of becoming.

These combined characteristics – I mean the stress on instability and seeming, and their dispassionate treatment – are hallmarks of that baggy beast postmodernism, and if you’re weary of it you might initially bridle at the coolly distanced voice of some of the poems, in case the denial of essence and its replacement by a striptease of appearances should be fetishized as an end in itself.

Often, though, the position Hudis adopts is more ambivalent and interesting. In ‘The Artist Mixes Colour in the Renaissance’, the painter-persona delights in telling us that the ‘primal blue you worship’ is partly made up of animal parts which ‘I knife, mine, grind, churn, pound […]’. Transcendence duly has its face rubbed in the dirt, but the end of the poem suggests that all the blood and muck that goes into this painting (of a ‘hair-coiled girl’), rather than desacralising it, actually constitutes a rival and more authentic source of power:

Some of the text has been omitted here[…] She took on the earth
to coagulate: egg-yolk, red clay, mineral, old linen
marble dust. Do you think, if she looked up
she wouldn’t roar with the energy of her roots?

The relationship between substance and ‘vision’ recurs time and again. It’s ultimately one of co-dependence rather than antagonism, as neatly summarised in ‘Consolidant’, where art restorers, paid to revive a discarded artist’s mannequin, labour to ‘re-bond her to the dream / she hatched from’.

Hudis is a fine observer (‘a toffee-smooth infant Christ’; ‘the cross eyed stare of angels’), and she also seems to know her art history. Her interest in de-romanticising art leads her to accentuate the ironic and accidental, and turns up some surprises: the prized sound of Stradivari’s violins is all down to the application of insecticide that saved them from woodworm, while a painter’s ‘famous desert colour was by-product / waste, layered toxins.’

This theme, though, and a persistent trace of archness in its treatment, features in too many poems, and when the topcoat of rhetoric wore thin I found myself wishing for more substance. In ‘Last Sighting’, an account of the dissolution of Vasari’s Last Supper in the Florentine flood of 1966, Hudis’ description of how the apostles felt the ‘Yellows, blue, carmine’ of their garments being ‘rewilded’ in water is lovely. Still, the nagging question remains, ‘So what?’ The final stanza’s focus on the face of Judas feels like a half-conscious recognition of the need for deeper meaning.

Restorations is an unsettling and ambitious collection by a powerful, restless poetic voice

Still, at their best, the poems on art go beyond description, beyond even a mischievous undermining of painting’s pretensions, to ask pertinent, difficult questions about the whole value system of modern, Western aesthetics, and this is a point of intersection with the second of Hudis’ main themes: colonial history, or rather, the colonial mindset that enables it. While they, too, are animated by irony, the tone of the ‘colonial’ poems is subtly different; what comes across is not only the folly and ignorance of this mindset but also its inherent melancholy. Colonial pioneers cannot ever do more than scratch the surface and lacquer artificial meanings onto places and ways of life that they have neither the wish nor the capacity to truly understand. Yes, it is horrendous, but it is also pitiable, in the way that the colonisers in Jean Rhys’ stories also are. The aura of pessimism, even sadness, implicit in these poems, adds welcome depth.

The painter’s mixing of ingredients, which so intrigues Hudis, is also relevant to her own, verbal, artistry. It’s a high wire act. The least imbalance can cause a poem to appear flat (‘routine as a hormone’), or too reliant on the reader’s complicity with its implied values. At times the real, unacknowledged subject of Restorations seems to be Hudis’ attempt to reconcile two completely different poetic voices – the one streetwise, glancing and tart, the other slower, more personal and reflective. The former mode works best when given free rein: ‘Annunciation’ is a wickedly amusing play on an unexpected delivery from Hermes: a ‘godlet’ whose asceticism leads the reluctant foster-mother to google ‘male eating disorder’ and who ‘was into vinyl, upset her by joining a marginal cult.’

About halfway through Restorations, the main theme switches from the restorer’s art to the illnesses of Hudis’ ageing parents. Now the relevant surfaces are not paint and grime but skin and the invisible meniscus that separates awareness from indifference, consciousness from coma. Unsurprisingly, these poems are more moving than those about art history, as the clever surface wordplay is sobered and stabilised by concealed reservoirs of emotion. ‘Under’ describes a visit to the hospital:

We’ve circled you like saints, on plastic chairs,
not homage but to stir you with names dropped
into the white well of your face.

Saints crop up all the time in the poems on art history, too, so this is an obvious point of comparison, but in this new context the reference expands. If the hospital visitors are like saints, what is the position of the patient? Is this some uncomfortable, terminal Adoration? But the syntax here is slightly ambiguous: isn’t it rather the departing parents who are figured as saints? And if so, does their seeming saintliness have less to do with virtue than with their final remoteness? We visit the dying somewhat as we visit an exhibition, and the very title of one poem, ‘The Person on Display Has Been Replaced by a Replica’ may strike us as horribly accurate.

At times the real, unacknowledged subject of Restorations seems to be Hudis’ attempt to reconcile two completely different poetic voices – the one streetwise, glancing and tart, the other slower, more personal and reflective

There is very little comfort in these hospital poems, and perhaps the most that can be said is that though restoration (of people as of paintings) is ultimately futile, the effort is human. This tension between botoxed preservation and vital decay lies at the heart of Restorations.

Hudis is a gifted and versatile poet, generally adroit in her prosody despite occasional arbitrary-seeming line endings. I became impatient with what seemed to be the self-conscious gesturing of the weaker poems, and a surface busyness of words at the expense of inner coherence:

But when the writing is more relaxed and snug to sense it can achieve a fluid beauty that contrasts appealingly with the gunge of the subject matter, as in this passage from ‘Inherent Vice’:

The foam was breaking
down, grease softening, smudging, a cataract
over his ‘clarity of purpose’. It caught dust, the last
black powders of a blue-bottle, minute silage
of dead people or traffic going anywhere
but a gallery. Hairs.

Despite its flaws, Restorations is an unsettling and ambitious collection by a powerful, restless poetic voice.

Steven Lovatt is a writer based in Swansea. He is a member of the International Literature Showcase, run by the British Council and the UK National Writing Centre, and his book Birdsong in a Time of Silence has been longlisted for the Wainwright Prize.
Share on Twitter Share on Facebook Share on Email 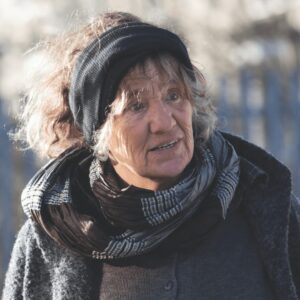