In Rain Tree, her third collection, Ruth Sharman revisits India, where she was born and spent her early childhood. Her poems made me long to go there too. They also left me pondering several unanswerable questions concerning the nature of childhood memories: What exactly is it that we remember when we think we remember our childhood? Does going back to the place of our childhood change our memories? Are childhood memories more vivid for those who grew up in another country?

The epigraph to the whole book is this famous haiku from Basho:

Even in Kyoto
hearing the cuckoo calling
I long for Kyoto

and this sense of longing permeates the book. Even in India, Ruth Sharman longs for India. Even as she encounters them again, she longs for the tea lights burning in their shrines, the giant centipedes, the hornbills, the street dogs and the flies, the slow, siesta afternoons, the temples and ashrams, the holy men, the incense, the peacocks. She longs for ‘The beauty of an Indian bus’:

Chances are there’ll be no door
and you’ll have the wind in your face all the way
and if you’re going far enough
you’ll stop for tea and pakoras
at a roadside shack.

She longs for India in the way that rain is longed for in a land accustomed to drought. In the opening poem, ‘The seedpod’, she describes finding a dry seedpod from a rain tree at the back of a cupboard in England. She imagines the seeds germinating, and thus the seedpod becomes the catalyst (maybe metaphorically, maybe actually) for her plan to revisit India. The seedpod

but after all these years

what chance of the seeds
even germinating?
Of pale shoots uncurling

till they’re forty feet high,
a sky-full of mynah birds
and monkey chatter,
a forest of flame trees
reaching over the walls
of that first bright garden.

But the return to India does happen, not once but three times, and despite the disillusionments that are an inevitable result of ‘going back’, there are gifts, such as the rain tree which appears in the middle of the book, and is perhaps a symbol for all that is magical about India:

Everything about it is beautiful. The fernlike feathery leaves
and the way they fold together to let the rain through.

Monkeypod tree. Saman. None of the names tell the whole story.
How the grass is greener in their shade, those pink-white flowers
a magnet for the bees, and how the scruffiest wasteland, the piles
of smoking litter, clouds of midges, mangy dogs licking their sores,
how all of them are transformed by the presence of these trees.

The spirituality of India is part of the atmosphere too, for example the strange and ghostly exoticism of the Theosophical Society headquarters in Chennai which are described in The theosophist’s garden:

No one sees this garden after dusk

No one sees Mme Blavatsky’s Bungalow
glimmering like a wedding cake among the banyans,
the owner of those burrows emerging

by the lily pond, or the fruit bats
rousing from their diurnal sleep
and taking to the air in their thousands.

On each of her visits to India, Ruth Sharman returns to the now derelict house she lived in as a small child. The building is surrounded by guards, but she manages on two occasions to break in. She’s on a mission. In the poem, ‘Breaking in’, she writes:

If I stayed long enough, perhaps
I could piece it back together
like a dream. Slip through a door
or round the top of the stairs
and there it would be, just as it was.
My ayah in a bright green sari,
so close I could reach out and touch

and my mother walking towards me
across the lawn in peep-toe sandals
and that long cream dress
with its pattern of paired ivy leaves,
one dark leaf and one light.

She scrutinises the place on Google Earth. It’s as if she is desperate to see deep inside the house, inside her past; to find a lost ‘something’ which cannot be defined. It’s much more than nostalgia. I was reminded of Wordsworth’s yearning for the authenticity and purity of the child’s vision which must, for all of us in time, ‘fade into the light of common day’. On her last visit, Ruth Sharman finally acknowledges that there is nothing more for her to retrieve from the house. In the poem ‘Last visit’ she writes:

I’m thinking derelict
even as I sneak in like a thief –
up over the ledge – and step
on a crate that tips, propels me
into the gloom of

was it the kitchen?

There’s nothing to steal.
A few sticks of broken furniture
that wasn’t even ours, a red plastic phone,
its cord winding across the floor
as if someone had hold

of the handset and were listening
in to our past.

Rain Tree is dedicated to Ruth Sharman’s late parents and they are a recurring presence. Towards the end of the book we find some poems addressed directly to her much-missed father, who was a lover of nature and collector of butterflies. In the poem ‘Untitled’ she remembers him in words of touching simplicity:

It’s the perfect lure,
this stream in bright sunshine
threading through the forest
and I can picture you

nipping over these rocks
with your net

I recognise an orange tip,
a sailor’s distinctive flap-and-glide

but – truth is – I’m lost
without your help, mesmerised
by all these dancing wings,
all this nameless beauty.

There is an ease to Ruth Sharman’s writing that carries you along. Her poems communicate with something of a child’s clarity of vision. They have a brightness. I’m reminded of Wordsworth again: ‘the glory and the freshness of a dream.’ 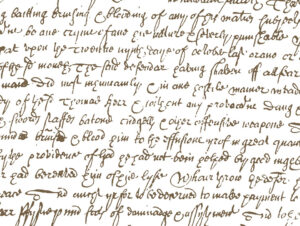