A good flow is like a fossil / it preserves the time

The poems featured in The Lost Chronicle, by Steven Camden (aka Polarbear), were “made to live in the mouth” and that’s undoubtedly where they live best. They have rhythm and a sense of cadence, and move better when given voice. To read them aloud feels playful and interactive, like playing a game of Guitar Hero. The lines travel together. You’ve got to hit the right notes at the right time, and when you do, everything clicks into place. Reader becomes performer. This isn’t to say they don’t work on the page, just that you’ll get more out of the experience of reading the collection if you let it pass over your larynx.

On which note, before reading any of Polarbear’s poems in print, I recommend listening to him deliver one or two of them himself – especially if you’re unfamiliar with spoken word poetry as a genre. If nothing else, it’ll give you an idea of how he meant for them to sound, how slowly or quickly the lines roll off his tongue, and how, as with theatre, a poem properly delivered can feel brand new and infinitely familiar all at the same time. The point of these poems, after all, is to be heard. There are videos on YouTube of Camden performing his poems ‘Jessica’, ‘repeaT’ and ‘Heartburn’, all of which are in the present collection.

If you do listen to his rendition of ‘Jessica’, written in 2006, you’ll notice that its penultimate stanza, in which Camden tutors his eight-year-old son on how to bust a rhyme, contains a general blueprint for how to read any of the poems in The Lost Chronicle:

right
first thing
you must observe the time
a good flow is like a fossil
it preserves the time and
the only thing of worth you can learn from mine
is that spaces between words deserve to shine
you’ve gotta find your own style, son
and if the flow feels right to you the rhyme’s done

It’s apparent when reading Polarbear’s poems written down that, juxtaposed with poetry written ‘for the page’, his rhymes can feel rudimentary: “date”, “eighty-eight”, “sweet state”, “feel great”, “clean slate”; “head full of dreams”, “in my teens”, “football teams”, “all my jeans”. Partly this is down to theme; Camden is not tackling the cosmos or discussing high culture. But it’s also to do with form. For many spoken word poets, sophistication of rhyme is secondary to rhythm and story. Like rap, performance poetry is lyrical storytelling with an emphasis on the real-time aural quality of the words. Rhyme serves rhythm. Rhythm is flow, and flow carries the story from the teller to the audience. The more complex a poet’s lexicon, the more likely they are to leave their listeners behind, which in the case of spoken word poetry means real life, tangible audience members going, ‘Huh?’ And since performance poets feel this sense of confusion more viscerally, I think, they’re more likely to try to avoid it.

There are still rappers and spoken word poets for whom language is a playing field, who craft two-, three- or even four-syllable rhymes, stow half-rhymes within them and lock them all together in giddy setpieces. In ‘Morning Light’, for example, rapper-poet Dizraeli (real name: Rowan Sawday) rhymes “Thatcherite decline” with “appetite for life”, “Catcher In The Rye” and “stamina is mine”. I encourage anyone interested in the art and history of rhyme to watch Vox’s deconstruction of some of the best raps of all time. But Camden puts intelligibility first – none of The Lost Chronicle’s poems is inaccessible. If the lexicon ever feels, for want of a better word, child-friendly, it’s a choice. Polarbear wants to bring everyone along with him, not just those with literature degrees.

If the lexicon ever feels, for want of a better word, child-friendly, it’s a choice. Polarbear wants to bring everyone along with him, not just those with literature degrees

The Lost Chronicle includes poems spanning six years. Which, combined with the autobiographical theme of Camden’s work, means its reader comes to learn quite a lot about its author. The collection records major changes in his life, the coming to terms with his new identity as a successful poet, and his reflections on the friends and places he left behind. ‘Jessica’ tells the story of his journey from teenagerdom to fatherhood (and includes some well executed time jumps); ‘Compton’ is about his parents’ divorce, and celebrates the power of music (in his case, N.W.A.) and communal experience (with ‘Mom’ and ‘Sis’) to turn dark days into light ones; and in ‘Scotch’, written in 2009, he grapples with the fact of being an artist – what it means to earn a reputation and how doing so has affected him and his relationships with old friends, his own past and his home. It combines humility with honesty:

I hear people
say fortune favours the brave
but
what if fortune
is just the simple bliss
of the risk that you take?
so one day’s grace
is another’s mistake and
being forced to wait
might be the force that saves
they tell me
you’ve gotta get with the times, right?
How else you gonna get
a bit of time in the limelight?

But reality looms in the rose tint of his glasses. ‘Creatures of Habit’ (2008) lulls the reader with its meandering gait, weaving as if through the aisles of a Tesco supermarket. It plods along, hesitating on the mundane, and only when it ends does it hint at why it took so long getting there.

I try not to forget

I wrote above that Camden belongs to a tradition of poets for whom sophistication of rhyme is secondary to rhythm and story. Many of the poems in this collection are lyric stories held together by time: metre and message. But there are also those that raise the bar with regard to language. In ‘repeaT’, he returns home and finds himself trying to click into familiar rhythms with old friends. He reflects humbly and relatably on what it is to return to a place made strange by time, while maintaining a single rhyming throughline over more than three pages: “eloquent”, “relevant”, “elephant”, “jealousies”, “celebrity”, “memories”, “messages”, “desert is”, “heavy shit”, “selling it”, “sentences”, and it goes on. There are moments elsewhere where the simplicity of the rhyme is what elevates it, where conversational style meets unintrusive lexicon and the rhythm just unfolds – where it’s hard to imagine anyone ‘reading it wrong’.

our diet consists
of Wham Bars
Wotsits and Irn-Bru
Danny has a habit of lying
and I wanna be like him
so I’m trying too
So who would you choose?
he says and
I realise I’m not listening
I was smelling the after-rain
and admiring
the tarmac glistening

There are moments when his writing shimmers with the sublime, when character, story, syntax and rhythm combine to become something beautiful

Steven Camden is capable of a great deal. In The Lost Chronicle, he guides us, panged occasionally by nostalgia, through the kitchens, bedrooms, pubs, supermarkets and cars of his childhood. The places, people and types of interaction he writes about are, by and large, ordinary, and relatable to many. The language he uses to write about them is accessible, meaning you don’t need a literature degree, or even to be a regular reader of verse, to feel like Polarbear writes for you. And on top of all that, there are moments when his writing shimmers with the sublime, when character, story, syntax and rhythm combine to become something beautiful. Those who saw Polarbear perform in the late 2000s will find much to enjoy in this retrospective collection. And many, first-timers included, will be left wondering what he’s been up to since 2009. 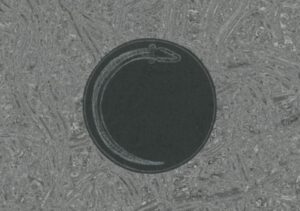 I was nothing but a heretic cormorant