We chose ‘Ping’ by Martyn Crucefix to be our Friday Poem this week. The short lines — some only three syllables long — float down the page in much the same way as the snowflakes they describe, slowing our reading and giving the poem a delicate, disjointed quality. The bright notification tone of the phone contrasts with the soft shuffle of the falling snow and serves to emphasise the atmosphere of strangeness and disconnection. Crucefix explores the way technology is now so often used to capture moments in time, and how it ends up mediating the distances between us. We think the poem is a gentle plea to reconnect, not just with each other but also with the natural world, to pause, to pay attention and to listen.

Martyn Crucefix‘s new collection Between a Drowning Man will be published by Salt in 2023. Recent publications include Cargo of Limbs (Hercules Editions, 2019) and The Lovely Disciplines (Seren, 2017).These Numbered Days, translations of poems by Peter Huchel (Shearsman, 2019), won the Schlegel-Tieck Translation Prize 2020. A Rilke Selected is forthcoming from Pushkin Press in 2023, and a translation of Lutz Seiler’s essays, Sundays I Thought of God, will be published by And Other Stories. He is Royal Literary Fund Fellow at The British Library. Martyn Crucefix blogs here. 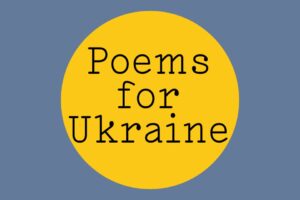 by Erica Hesketh — one of our Poems for Ukraine