Houses of the poets

(Skip to the Gallery of images)

Some people learnt to play piano in lockdown. Others read that 19th century novel, they’d always been meaning to. I did both of these, but in between bashing out Lady Madonna and sitting in the flowerbed ploughing through Far From the Madding Crowd, I also developed a new side-hustle that took me totally by surprise.

Almost out of the blue, I started creating paper cut-ups of the houses of the poets. I began with Dove Cottage, home of Dorothy and William Wordsworth. The prompt was the launch of friend and fellow poet Sarah Doyle’s brilliant pamphlet of collage poems based on Dorothy’s journals. It seemed appropriate to create an artwork in the same collage style.

The result was so startling, I immediately thought about doing another, and it felt logical to move next to their near neighbour, and friend, Coleridge. I was pleased with the fantastical pink sky above Greta Hall, which felt quite daring. Keats’ House in Hampstead was next; it was my first night scene and of course the temptation to add a ‘bright star’ was impossible to resist.

I soon settled into a regular pattern. I’d sketch the main building first, then cut this out. I’d then lay out two large coloured pieces of paper as earth and sky and place the house in the middle. I typically work to A3 size. I’d then cut up the smaller pieces like windows, walls and trees, as if assembling my own jigsaw. Once I’ve got everything in the right place, I’d take a photo so I’d remember where it was all supposed to go. Only then would I start the painstaking process of sticking things down. Pritt Stick is my glue of choice, as it gives you about five seconds’ grace, when you can reposition things if they’re not quite right.

I’m not really a visual artist, although have dabbled with a bit of painting and drawing. Cut-ups are more forgiving of mistakes than other art forms. The master, of course, is Matisse, who turned to this after his eyesight deteriorated so much he could no longer paint. The houses don’t always have to be perfectly accurate and half the fun is adding embellishments that allude to the poet’s work – I love leaving little Easter eggs like the daffodils outside Dove Cottage; the mouse creeping up on Robert Burns’ cottage, or the few late Chrysanthemums near John Betjeman’s flat. I added four butterflies to the Bronte parsonage to represent the spirits of the three gifted sisters and their luckless brother, Branwell.

I’ve become very good at birds in flight (there’s often a lot sky to fill) but it has to be the right one for the right poet; so pigeons for Betjeman’s London skyline but eagles for Elizabeth Bishop’s Nova Scotia; a dove for Wilfred Owen, and a hummingbird for D.H. Lawrence.

I did mean to stop at ten, but found it impossible. It’s thoroughly addictive. It takes about two full days to complete each artwork. At the same time, I delve into their poetry. The process is totally immersive and takes you very close to the spirit of the poet and their work. Working for half an hour on a window Sylvia Plath might have leant out of, takes you uniquely close to the poet. I enjoy exploring the different styles of architecture; the effect of different lights and times of day – from Pablo Neruda’s surrealist self-designed house in Chile to Edward Thomas’ very ordinary cottage in Surrey.

I haven’t decided whether to sell any yet, but have given one or two away. I’m working on Walt Whitman’s House in Camden, New Jersey at the moment, and I can’t see myself stopping now. It’s got me reading some of the best poetry ever written, and taken me on a journey all over the world – and I haven’t had to pay for a PCR Test either to take me there.

Christopher James won the National Poetry Competition in 2008. His collections include The Penguin Diaries (Templar Poetry, 2017) and Shadows in the Wood, an illustrated bestiary of Britain’s woodlands, and his new pamphlet, The Storm in the Piano, will be published by Maytree Press in June 2022

The images on this page are created by Christopher James. Copyright license Creative Commons CC BY-NC-ND 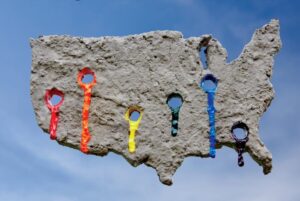 Feature: Andrew McMillan on the challenges and rewards of poetry commissions