Do you have a pet hate, a word that has you reaching for the red pen, a word that you think should be placed under a five year moratorium and barred from all use in poems for that period? Send us your 500 words denunciation and if you make us smile wryly and nod with recognition we will publish it. In the second of our series on over-used words in poetry, Chris Edgoose takes on ‘palimpsest’

A palimpsest is a ‘palaeographic object’ (I know that because I read this article). In the non-poetic world, you’re only going to need the word very occasionally and probably only then if you work with ancient manuscripts (I mean, there might be times; I remember once seeing an old pub name bleeding through a new one painted on the outside wall of the pub and I guess I could have pointed out to the person I was with that it was a palimpsest, but I’m not sure it would have improved the evening).

On the other hand, if you’re a poet who is looking to express figuratively a layering of meanings, one set of meanings poking through into another set – in other words, if you’re looking for a metaphor for Metaphor, then palimpsest is a useful word. In fact, it’s probably the perfect word. And it knows it, smiling out at you smugly from its nest of lesser words, dominating everything else in the line, the stanza, or even the whole poem, using up the oxygen of all other metaphors in its proximity the way a famous line in Shakespeare takes up disproportionate space in the scene where it appears. And ultimately that’s palimpsest’s downfall, it’s too good. It’s just too much of a gift to the poet. It feels like an almost lazy act to select this great, bloated sitting duck of a word; to be seduced by its perfectly literary, historical and academic credentials. Its metaphorical value so outweighs its practical value that it’s like a tool invented specifically for poetry; a gift handed down by the Muses themselves to help out the floundering mortal bard. It’s tempting to think that a word like palimpsest is too good not to use; but it’s not, it’s too ‘too-good-not-to-use’ to use.

And there’s the impressive nature of the word’s structure itself: it looks and perhaps sounds dactylic, but it’s more fruitfully approached as a poem in itself. That unusual (audacious even) central consonantal cluster mps dominates*, bisecting the micronarrative; a leafy opening trochee palim and knife-like closing syllable sest are beautifully balanced, the plain, almost damp, first two-thirds transformed into something majestic, mountainous, by the superlative ending: if it were an adjective it wouldn’t just be palimps, it would be the palimpsest. As we open the word up we find this surreal terrain compounded by its etymology, where digging down we find palin and psestos in its Greek roots, conjuring, of course, Monty Python and Italian sauces.

But there are great humble poems and great hubristic ones, and palimpsest falls in the latter category. It’s a self-satisfied word, plump with its own perfection; but for all its flourish and preen, there’s no hiding that behind the perfection lies not the lamp of inspiration or the Everest of metaphors (as I once thought), but pap, pimp, limp, lame, psst and pest.

Or am I being unfair?

*mps is not altogether uncommon, especially when counting endings of third-person verbs, but rarer in a central position in nouns, and phonologically for the cluster to be followed by /e/ is unique, I think. 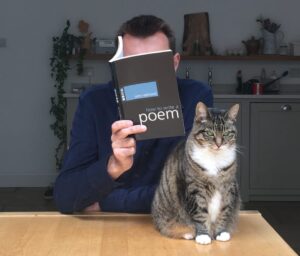 I’m enjoying the anonymity while it lasts

In Conversation: The Friday Poem talks to Brian Bilston, the unofficial Poet Laureate of Twitter