The year I was lost in the core of a star

I canvassed opinion amongst the men: how did they feel about poetry about a large ovarian cyst? Responses varied from “It might be more interesting to women” and “Sounds a bit visceral” to “Fuck off”, though in this case the young man was referring to all poetry, any poetry, and not poetry about cysts in particular. Even as a woman, I worried that the subject matter might be … what? Bloody? Grim full of bodily secretions? Why would that be a problem? I’m no stranger to the female body, having one of my own. Still pondering my resistance I opened the pamphlet and started to read, and found that the first few lines from the opening poem, ‘Cyst’, dispelled much of my unease:

I tried to think of you as fruit, growing
against the sun-warm wall of my gut.

Melon-headed, you nudged the leafy organs,
dug out a place for yourself in the plot.

Not only does Joanna Ingham devise beautiful and arresting ways to conceive of her ovarian cyst — it becomes an arrogant pomegranate, a pool that floods the fields — she is so generous and frank about her story that I felt only interest, connexion and compassion. Yes, some of the writing is visceral, but Ingham treats the thing with such care and with such humanity that I was, from the first poem, fully present for her story.

The story of Ovarium is about Ingham’s diagnosis, her surgery, and her recovery, with all the various implications. She writes of panic, scans, displacement activities, going under an anaesthetic with the terrible fear of not waking up, and  — after the surgery — having to come to terms with both her changed body and the loss of one ovary (who knew Advanced sharks have only a single ovary?)

The story of Ovarium is about Ingham’s diagnosis, her surgery, and her recovery, with all the various implications

In ‘Bay 1, Elizabeth Ward’ she describes much that is shudderingly familiar to anyone who has spent time in hospital, from “the rhythms of shifts and rounds, the pad of nurses / down long corridors” to how we “tell each other secrets / like twelve-year-olds at a sleepover”. There are blood pressure cuffs which “fill and sigh by themselves” and lunches which come on plates “hatted in plastic”. She writes honestly and openly, and in beautifully turned phrases that will resonate with many:

… we listen to each other breathing, check the places
newly empty inside us, the staples that hold us together.

In ‘The discharge nurse tells me no hanky parky for at least six weeks’ she writes about the pillow that, on discharge, the nurses recommend you place between your body and the seatbelt for the journey home, “soft on / the cut”. In ‘How to Sleep’ she writes of the paper knickers “like origami blossom” she has to wear, and “biro arrows on your skin”. In ‘After the op’ she writes about the cardboard piss bowls which are:

moulded to nestle
inside the toilet seat, have millilitres marked
like measuring jugs for baking

and which she must fill, three times, before she can be discharged. “I bear my third bowl chalice-like / before me”.

Yes, parts of this pamphlet may not appeal to men, who won’t have had first-hand experience of ovarian cysts. But experiences of illness, hospitalisation and surgery are, of course, common to both sexes, and I found the descriptions of women bonding over their shared hospital experiences convincing, powerful and extremely moving.

However Ovarium is much more than simply the sharing of a set of experiences along a medical pathway. For a start, it’s about women’s bodies, and how women feel about their bodies. I suspect that many women will sigh inwardly with recognition when, in ‘To my belly’, she says “Ah, my soft white enemy, how I’ve hated you”, and describes the shame, the indignities, the diets, and the various other ways in which she has done battle with her body. In ‘Scan’ she describes how the medics have “taken my body in slices, / marbled like cuts of tongue.” This is not the first time a woman’s body has been compared to a piece of meat, but it feels different when a woman does it herself, and especially in a surgical context.

But Ovarium is much more than simply the sharing of a set of experiences along a medical pathway. For a start, it’s about women’s bodies, and how women feel about their bodies

Throughout the pamphlet we feel that oh-so-familiar ambivalence about the female body when it doesn’t do what it’s supposed to do, doesn’t look the way it’s supposed to look. In ‘The discharge nurse tells me no hanky parky for at least six weeks’ she says:

Look at me, legs in their compression socks or
wound under its sticky dressing, despised
and infected in the slump of my belly, or cunt that is
no longer private or sexual or fun.

Such ambivalence is unsurprising when so much of how women feel about their own bodies is affected by how men feel about the female body, and Ingham is both knowing and joyously pissy about this. In ‘Ovariotomy for large cystoadenoma ovarii’ we watch a silent film of Sir Harold Beckwith removing an enormous ovarian cyst like “a revolting white octopus”. At the end of the op:

Sir Harold slices it apart, stands back a little to let the contents
flood out over the edge of the table, lifts strands of sticky mucin
for us to fully appreciate what he has been dealing with.

His disgust is palpable. Ingham is ruder — and funnier — about male medics in ‘Dear Gabriele Falloppio’. But she ends ‘To my belly’ with a message of hope and commitment to her body: “I’ll try to love you now if you’ll only be whole.”

Ovarium details a hard journey, but it is touching and tender and thoroughly engaging. It is, in part, an elegy for an ovary lost along the way, and perhaps for a life led without the cyst. And it’s a nod to the future, and a celebration of what her lost ovary gave her, and her family: “Your gifts of blood and milk, your lust. This child, her body housing your paired daughters.”

Hilary Menos is editor of The Friday Poem 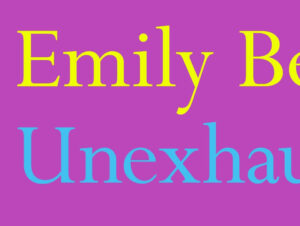