Our lady of tyres / Notre dame des pneus is inspired by the story of Plogoff, a ‘rusty’ fishing town in the Finistère department of Brittany in north-western France, whose inhabitants fought off attempts by EDF (Electricité de France) to build a nuclear power plant in the town. Their fight – and their success – became one of the best known examples of local resistance to interference by the French state. Much of what I read in the Plogoff part of the pamphlet (broadly the first fifty pages) resonated with much that I’ve experienced living in France for the last six years, so I was keen to like it, and keen to review it, partly, I admit, to show off my (mediocre at best, says my bilingual teenager) command of the French language and my understanding of things French.

I’ll tell you the story of Plogoff first, because that’s what drew me in. EDF planned to build a 1500-megawatt nuclear station in Plogoff which was scheduled to go into operation in 1990. Brittany is a bit like Cornwall – a long way from the centre of power, hard to reach and hard to control – and its inhabitants are also similar; they are independent-minded mavericks and are not fond of people telling them what to do (I have some experience of this, having married into a Cornish family).

The first confrontation occurred in 1976 when EDF engineers were prevented from entering the prospective site by local inhabitants blocking the access roads. On January 30th 1980 the official documents for the Public Utility Inquiry (weighing three and a half kilograms – for anyone who has spent any time dealing with French bureaucracy this won’t be surprising) arrived at the Mairie (Town Hall). They were immediately burned ceremonially in the central square in the presence of the Maire (Mayor).

This sort of local direct action is so typical of rural France: our commune is installing fibre at the moment and a few of our neighbours don’t want it so a few weeks ago they pulled out all the piquets along the side of the road which marked where holes were to be dug for the poles which would carry the fibre. When we next saw the Maire we mentioned this to her – she knew exactly who had done it, and laughed and rolled her eyes. It seems that a little bit of direct action is every Frenchman’s (and Frenchwoman’s) right – you might say it’s de rigueur.

The official documents for the Public Utility Inquiry arrived at the Mairie. They were immediately burned ceremonially in the central square in the presence of the Maire

EDF were required by law (of course!) to display the documents but were prevented by the local politicians from using the Mairie or any other place in the town to display them. Their response was to set up mobile ‘Mairies Annexes’ in small vans on which they displayed the documents.

In ‘How did it start’ Trévien writes:

The police come to find posters declaring the start of the survey.
They find none in Plogoff, in Goulien, in Cleden, in Primelin.
So they return, plaster them, take a picture as proof, then vanish.
The posters do not last long on the wall.

At this, the first barricades appeared. Access roads to the town were blocked with tree trunks, tractors, tyres and whatever else was to hand. Every day the vans made their way into the town, under police protection, having to remove all barricades as they went. They stayed there, parked, from 9am to 5pm, then left.

This was the beginning of the siege of Plogoff. From January 31st for six weeks the vans, and the police guarding them, came under constant harassment. Locals threw stones and molotov cocktails. The women slung insults and taunts. There were arrests, trials, petitions, marches of several thousand people, general strikes, and even strikes in regional courts on days when cases against anti-nuclear activists were scheduled.

The police replied with tear gas. Every day, the convoy had to get into place through the barricades; the places where the vans were parked were often covered in manure and had to be cleaned. The main clashes usually occurred at 5pm when the vans were due to leave.  On March 14, the last day of the inquiry, a 7000-strong crowd gathered for a symbolic burial with coffins, crosses, crowns of flowers and women wearing traditional grieving headdresses.

By the autumn of 1980 the site was under constant occupation. Helicopters were prevented from landing by special kites and oil drums ready to be ignited. Locals organised an early warning system within a radius of 50 km around the site. The land had been taken under common ownership by about 2000 individual people to make expropriation more difficult. A sheep farm was installed on the site and supplied with additional sheep by local farmers.

The site picked for the nuclear site
is being controlled by sheep now.
Literal sheep. Not poetry sheep.

The sheep are on trial today,
though the court didn’t invite them
to defend themselves.

The French government never expected such resistance, and in 1981 François Mitterrand canceled the project. It was an enormous success for environmental and anti-nuclear campaigners, and a big boost for the French sense of the little guy resisting corporate or state power.

There’s so much to write about here. In parts, Trévien does do it justice. She captures the humour and spirit of the locals and their grim determination to resist. The title poem, ‘Our Lady of Tyres‘, opens:

We call our barricades the 5 o’clock mass,
and let me tell you, we’ve never been so fucking pious.
Our church is made of old cars and swearing,
our bones are tired but keep on giving.

Trévien details the strength and sharpness of the women, in particular. They play tricks on the EDF personnel: “Grandma’s plates, the ones with the rabbit, / have been redecorated to look like landmines” (from ‘Our Lady of Tyres‘). She includes a couple of found poems created from the voices of women of Plogoff, and these are convincing. In ‘We are not so good at saying hello’ she writes about how the town used to be cut in two, bourgeois on one side of the bridge, working class on the other, “but now we rot together”, and I like her description of the bay near Plogoff in ‘I discovered in this town more than a cliff‘:

The crones’ fishing spot,
the lopsided rock, the rock
that looks like a cat, the rock that belongs to Hervé,
the one of Louis XVI’s head, the one on which Sarah Bernhardt sat,
the lobster’s hole, the sleeping rock.

This list of names granted by the locals inhabitants brings the place alive. But often I find her poems to be not much more than a narrative, for example in the previously quoted ‘How did it start’, and also here in ‘We will build a harbour’:

Directors thought,
this town will be an easy mark,
as they pinned it on the map.

A great place to have a nuclear station they agreed.
We’ll have a port here at the place where the waves are never
happy. The town will be grateful to have electricity.

They did not suspect that the weather had sharpened more than
the landscape.

Nine poems come from Brain Fugue, Trévien’s 2019 ‘experimental’ pamphlet from Verve, where she meditates on her own brain and its unreliability and complexity. I don’t know why. That’s not to say I don’t think some of the nine are great – for example ‘Esc Delete Uninstall’:

My brain’s installed a decoder
that translates everything told to me
into “I wish you were dead”.

I do not wish
to be dead, but peer pressure is a bitch.

This is amusing, dry, well-calibrated stuff. But there’s only a small thematic crossover between Brain Fugue and Our lady of tyres, in that Brain Fugue address, in some poems, issues of translation. It also means that, as every poem here is also translated into French, what could have been a neat pamphlet becomes an eighty page book.

My biggest complaint, however, was with the whole business of translation. Presumably Trévien wanted to be able to present her poems to the Plogoff community in French, and why not? Well, there’s always a difficulty with translating between two languages, and here the long and flowery French sometimes has a very different feel to the more abrupt, punchy Anglo-Saxon-y English. Look at how ‘Why not?’ ends:

if your small village
can make presidents sweat

what’s to stop me
or any of us really

The French translation loses the throwaway, shrugging and rather curtailed sense of the English version:

In a number of places I found the French actually made more sense than the English. Compare these, in ‘Where did you go?’ (or ‘Où es-tu ?’ in French):

The next day the fisherman who swore
he saw a mass conducted in a flooded church
is taken for a visionary, that is a drunk,
and bought a round of beers.

The French adds “de ses yeux” – “with his own eyes” and I prefer it with the French emphasis. In line three “un visionnaire, ou plutôt un ivrogne” really translates as “a visionary, or rather a drunk” which is clearer than the rather confusing “that is a drunk” – should this be read with a pause, so “a visionary, that is, a drunk,” or as  “a visionary who is a drunk”? I’m sorry to get so granular, but surely that’s the reason for printing English and French versions together.

And what about, in ‘Start with the stones’, which begins:

Start with the stones from the garden walls.
Pollinate by the building stones, the bridge stones,
the votive stones, the stones of the saints.
Weigh each stone like a prayer.

What does Trévien mean by “Pollinate by …”? Does the translation shed any light? The French line reads: “Pollinisez les pierres de construction …” so not really. But if I type in ‘Pollinisez’ to DeepL, my go-to translation program, it comes up with ‘Collate’ as an option. If ‘pollinisez’ can translate as ‘collate’, that makes more sense – we may be being exhorted to collate, or collect, various types of stones. But this is the wrong direction of travel for the translation – we are supposed to be looking at an English text translated into French, not a French text translated into English, so I’m not really any the wiser. 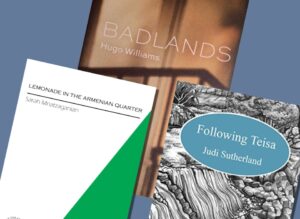