I’ve always been interested in borders, their pretence and apparent permanence, and what happens either side of them: the ideologies that push people around at the whims of others, and the ways we are encouraged to display agency, or to think we do, within tight delineations. So, the grotesquely misnamed Korean Demilitarised Zone between the communist and capitalist Koreas that share millennia of history, sometimes referred to as the last hard front of the Cold War, has always held a special fascination for me.

In the autumn of 2020, I was selected as one of the first international writers in residence for Bucheon UNESCO City of Literature, alongside the Canadian-Korean novelist Jeff Noh. I had one of the most meaningful couple of months of my life, and blogged about it in six posts, linked at the bottom of this article.

Bucheon is a city of about three quarters of a million people, squeezed between the behemoths of Incheon and Seoul, in a ceaseless conurbation of over twenty-five million. White Samsung- and Hyundai-built tower blocks needled the sky above me, neon flashed along every main street, near-identical usually white cars choked the boulevards. In some ways, I found myself in a land of Edward Bernays’ fantasy, but one he never visited and probably never really thought about.

One day, a South Korean man swam north across the Imjin River, was captured, and executed. I learned this over breakfast in a Hyundai department store less than an hours’ drive from where he had set out. Always, the ‘other’ Korea remained as inscrutable as it had always been. “I rarely think about them”, one of my hosts told me, sitting in a megalopolis the lights from which must leave a huge orange smudge in the sky above villages, towns and cities where people habitually go hungry, oxen plough thin fields, statues of the Kims wave from plinths at empty squares, and watching a black-market DVD might get you executed and your family thrown in a forced labour camp. She wasn’t being unkind.

My commission was to write about the border twenty-five miles to the north. And that is what I set out to do, falteringly but enthusiastically: climbing mountains near Incheon and near Sokcho, west and east, to look across at the same sort of mountains on the other side, plodding through an incursion tunnel dug by the North Koreans, squinting through binoculars and zoom lenses from border viewpoints, talking to some people with family on the other side (and in one instance to someone who had escaped to Seoul), poking around captured bits of hardware in museums.

Gallery of photographs of Korea taken by the author

I had no idea what to write

I just knew I wanted to embrace my entirely non-Korean perspectives: to investigate and connect as well as I could, to avoid any hint of exoticism, to be myself somewhere that couldn’t be mine. So I started closer to home, and worked my way in, and back out, and eventually completed a sequence. Three of its poems focus directly on specific places along the border, but the others talk around it, or use it as context. Here are two of the latter.

The first, ‘Come Here to This Gate’, opens the sequence. The title is a quotation from Ronald Reagan’s Berlin Wall Speech at the Brandenberg Gate on 12 June 1987. All people in the poem are real, though some names have been changed. The last stanza cannot entirely be true, though: a mutual agreement between the Koreas means that tourists in the North and South are not ever able to see one another in the Joint Security Area at Panmunjom.

Come here to this gate

Ciaran Doyle, inside his curfewed estate,
throws chunks of brick at Brits in armoured cars.
What else is he supposed to do? One dinks
pathetic against a Hotspur, its pillar-box eyes
sliding fast up Rossville Street. Across

the border, Günter Wetzel is driving slowly
to Peter Strelzyk. A year of planning later,
they’re in an attic sewing rolls of taffeta
into a bag the size of a Plattenbau,
plotting launch sites, then telling the kids. Across

the border, Afaf Odeh cuddles the child
she got to keep, wraps and pins her scarf
behind the canvas of the home they’ve had
for sixteen months, and lobs a rubber ball.
The lad laughs, toddles after it. Across

the border, María Díaz gets her brother:
those gringos are doing drills again, so they run
to watch through the slats, holding their kicking mutt
who growls like a turbine as shields, boots, batons
edge close in a phalanx, threaten no-one. Across

the border, Ho Sun-hui, a proud guide,
perhaps – but who could know? – translates the soldier
who then, purse-lipped, takes his tour group out
to see the enemy. They wince and pick
us out and we stare back, across the border.

‘Chromite’, the last poem in the sequence, refers to ‘Operation Chromite’ the codename for the Incheon Landings in 1950, which helped to turn the tide in the Korean War, eventually leading to the enduring stalemate: a border a little south of the 38th parallel (the initial border) to the west, a little north to the east. A chaebol is a South Korean-owned industrial conglomerate (such as Hyundai, Lotte, and Samsung), all of which are involved in many more industries than we in Britain typically realise. Hanjin is another chaebol, and the owner of Korean Air. It was founded at the end of the Second World War, and its first major customer was the US Army. The Yellow Sea is almost always the West Sea when named in English in South Korea. It does indeed have a yellow tinge in places, because it carries immense amounts of silt and sand, principally from China.

‘Keep the reunified Korea in your heart’
said the old man, palming his chest. And
okay, I do. And there it stays, doing nothing

the memorial to Operation Chromite,
which has no other memorial. A child beside me
pulls down her mask, is chastened, frumps.

‘We’re progress’, the man added. See it down there,
a phosphoresced capital washing round its hills,
a land of neon chaebols and kimchi jars

where new friends complete the circuits
of their lives for Samsung, Lotte, Hyundai,
as I complete this circuit for Hanjin.

See the sea ooze the yellow they don’t call it
here – there – with silt from China, as we skirt
North Korean airspace. This land is your land

I hum before noticing it, my subconscious
playing funny, as dark fishing vessels ply
what looks turbid. And then we cross

the safety of China, from where this – that –
is ordained. A city shifts in new dark –
Shenyang? – a molten web, and soon there is

nothing but black, the dark familiar nowhere,
and then the grind of lowering, the misted plots
of ruined nametagged earth around our lives.

Rory Waterman is the author of three collections from Carcanet: Tonight the Summer’s Over, which was a PBS Recommendation and was shortlisted for a Seamus Heaney Award; Sarajevo Roses, shortlisted for the Ledbury Forte Prize, and most recently Sweet Nothings. He teaches English at Nottingham Trent University, has written several books on modern and contemporary poetry, and co-edits New Walk Editions. Rory Waterman’s website is here 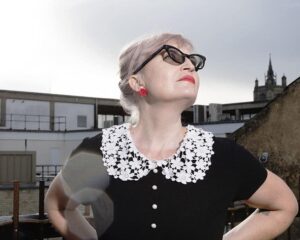 Feature: Helen Ivory writes on belonging, identity and finding a voice, and wonders whether hers has a Luton accent