I think the first poetry in translation I ever read was by Léopold Senghor. Throughout the nineteen-eighties and nineties my father was a senior librarian in Birmingham, and at that time there was still enough investment in local government, and enough trust in the judgement of individual staff, for he and his colleagues to seek new kinds of literature to add to the city’s treasury. Often he’d bring home selections of what he’d ordered.

I’d have been reading, kicking a sponge football around the cul-de-sac, playing ‘Hunchback’ or ‘Exploding Fist’ on our Commodore 64, or just kneeling by the window to watch the rain fall on the ten rocks we called ‘the rockery’. I knew the engine sound of our Toyota straining up the hill, and five minutes later dad would enter the porch, attended by a smell of office lino and binding glue. Either right there in the hall or after dinner if I was ravenous I’d prise the gold clasps of his briefcase and take out the books, published by the Women’s Press, Virago and the African Writers’ Series. Innocent of the world’s ways, it never occurred to me that this might be an unusual diet for a teenage boy in the suburban West Midlands.

The African Writers’ Series was published by Heinemann from the early sixties, and just made it into the twenty-first century before being discontinued. The small size and compactness of the hardbacks appealed to me, and I was especially drawn to the line drawings and very particular shade of dull orange used for the early editions. (How wonderful and mysterious are the extinct colours of the sixties and seventies!) The books were my first exposure to poets such as Mongane Wally Serote, Dennis Brutus and Okot p’Bitek. These poets wrote mainly in English, but the series also included the translated verse of francophone poets, Senghor among them. I must have taken the Senghor volume on one of our summer holidays to Dorset or mid-Wales, as I can still see the hardback lying open on warm sand, and the reflected glare of the pages.

Right there in the shop, it felt like some absence I’d lived with since my teenage years was being irrigated with meaning. I think I read the whole thing without sitting down

We read some poetry at school, of course, but I didn’t share our teacher’s taste for Poe and Spender. I got on better with Coleridge’s lovely lady Christabel, although in our boys’ school I remember the lesbian plot-line being the main draw, just as our chief appreciation of Tess of the D’Urbervilles wasn’t its compelling tragedy or Hardy’s panoramic evocation of landscape but rather, in the film version, a brief but permanently imprinted glimpse of Nastassja Kinski’s nipple. Our English teacher was Czech, and one of a handful of genuinely cultured people on a staff of boors and lunchtime boozers, but it was only ten years later, when I fell for East European culture in a big way, that I could regret that Mr Nový hadn’t instead exposed us to the poets of his homeland – Vladimír Holan, say, or Miroslav Holub.

Whether it was that early diet of poetry from other places, my impatience with the canonical romantics and moderns we were fed on, or perhaps a general disillusionment with the triviality and commercialism of mainstream Anglo-American culture, by my twenties and early thirties much of the poetry I read was translated. Ted Hughes and Daniel Weissbort’s series ‘Modern Poetry in Translation’ was my main source, and a little later Hughes and Seamus Heaney’s anthology The Rattle Bag put me on to poets such as Tomas Tranströmer as well as returning me to African poetry through translations from the Yoruba. It was about then that I could first have expressed in a hesitant way what I liked and disliked in poetry. I was put off by rhetoric but tended to respond to poetry that was plain, direct, demotic and image-based. Of course, the image tends to assume greater importance anyway, when much of the original prosody needs to be sacrificed in translation.

Browsing a charity shop in the early 2000s I found Czesław Miłosz’s anthology Post-War Polish Poets, and knew at once that I would be changed by it. Right there in the shop, it felt like some absence I’d lived with since my teenage years was being irrigated with meaning. I think I read the whole thing without sitting down. This little book contained poems that were moral without pomposity, playful without frivolity and ironic without the least posturing. Aesthetically, ethically and intellectually I’d found a home, because despite the unfathomable difference in experience between me and these writers who had suffered directly from war and the enforced perversities of Communism, their persistent love of the world and language, and their absolute impatience with posturing and pretence, appealed to me as the only proper basis for how to conduct oneself in creative work and in life generally.  The book gave me ideas, it gave me hope and it gave me resources against the nihilist literary and cultural theory that I was then being urged to assimilate at university.

This provisional quality of Herbert’s poems I find very appealing. It’s not at all a resort to disengagement, but instead a wise and humane reticence motivated above all by suspicion of ideologies, and understanding of plain human weakness

Mostly, though it just gave me great pleasure, and by my tenth reading I began to establish preferences. By temperament I inclined more towards Wisława Szymborska’s wit and tenderness than Aleksander Wat’s philosophical conceits, and chose Tadeusz Rozewicz’s sparse frankness over Stanisław Grochowiak’s richness and morbidity. Miłosz himself, though I admired certain poems very much, was too direct and affirmatory. Most of all I loved at once the style and sensibility of Zbigniew Herbert, who said of himself that in his poems he ‘tried to use the conditional. I hesitate. I don’t like imperatives, exclamation marks, black-and-white divisions.’

This provisional quality of Herbert’s poems I find very appealing. It’s not at all a resort to disengagement, but instead a wise and humane reticence motivated above all by suspicion of ideologies, and understanding of plain human weakness. Herbert is every bit as moral as Miłosz, but he is wry rather than declamatory and unlike his friend could never have been comfortable as The Conscience of the Nation. But he does make you think, and he can also be very funny. The difficulty here is to choose just one poem and to avoid the temptation of trying to make it ‘representative’. So I’ll settle for ‘Native Devil’, for the simple reason that whenever I return to it I find it as fresh and amusing as I did on first reading. The wonderful translation is by Alissa Valles.

He came from the West in the early tenth century. Initially he was
bursting with energy and ideas. The clip-clop of his hooves was heard
all over the place. The air smelled diabolical. This virgin land, nearer to hell
than to heaven, seemed to him a promised land. The fickle folk soul was
virtually begging for a baptism of dark fire.
On hillsides belfries quivered. Monks squeaked like mice. Sacramental
water was poured out by the canful.

The castles and cities he leased to masters of alchemy and fraudulent
magicians. He himself sank his ten claws into the nation’s red meat – the
peasantry. He entered deep into the flesh leaving no trace. Matricides threw
together votive chapels. Fallen girls raised themselves up. The possessed
grinned idiotically.
Angels’ muscles turned flabby. People fell into a dull virtue.

Very quickly the smell of sulphur left him. He began to smell innocently
of hay. He became something of a boozer. He went to the dogs completely.
If he visits a barn, he doesn’t tie the cows’ tails together. He doesn’t even
Tickle the nipples of farmers’ wives at night.
But he survives everyone. Stubborn as a cockle, lazy as a burdock.

Read about Zbigniew Herbert on the Poetry Foundation website 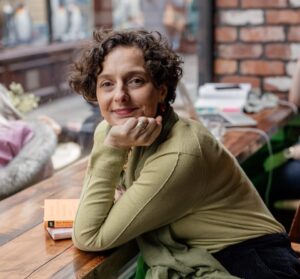 Feature: Sophie Buchaillard talks about the Writers on Reading podcast, how poetry can be a real conversation between writer and reader, and about the future of Welsh poetry