The Friday Poem In Conversation with James Conor Patterson

TFP: Tell us about your book due out in 2022, bandit country.

JCP: One of the things that’s always fired me up as a writer has been the depiction of where I’m from – Newry, South Down, South Armagh – as a perpetually bleak, violent and semi-war-torn place. Such propaganda earned Newry and its surrounding hinterland the moniker ‘bandit country’ during the height of the Troubles, a nickname first coined in 1974 by then-Secretary of State for Northern Ireland, Merlyn Rees.

The purpose of such othering, I suspect, was to make the largely Catholic local population seem more insurgent than they actually were, and therefore justify any violence meted out as a form of ‘civilising the natives’.

With that in mind, I wanted to write a collection that depicted the real, rich inner-lives of the town’s inhabitants. The stories I grew up with, the urban legends, mythologies, jokes and dialect that defined what was (and is) the real Newry, and not just the Newry of atrocities and headlines that were foisted upon us.

TFP: bandit country, a debut poetry collection, has been snapped up by Picador – a major publisher – after a four-way auction – that’s unusual, right?

JCP: It was unusual in the sense that I didn’t expect to get any offers at all! At the point it was picked up, bandit country was already two years old and some of the poems it contained were even older, so I had already kind of internalised an idea that it was unpublishable. That was a confidence issue, of course, and I’ve since made peace with the idea that maybe what the book offers is more than just the usual ‘local flavour’ stuff that occasionally slips through the net.

It’s also down to my incredible agent, Niki, who evangelised on my behalf and gave perhaps a better assessment of bandit country than I was capable of myself. Having her in my corner – that is, someone who knows the industry inside-out – was invaluable.

I think good work has always been written, it’s just that publishing houses are maybe starting to take it more seriously as an art form with the potential to capture the zeitgeist

TFP: Does that point to a renaissance in poetry more generally?

JCP: I think good work has always been written, it’s just that publishing houses are maybe starting to take it more seriously as an art form with the potential to capture the zeitgeist.

That could be for a number of reasons – perhaps most cynically, money – though where there’s a ‘market’ for something it usually means that something organic has happened that has just then started to trend. More people reading, for example, or more people looking to poetry for answers.

Why that is, I don’t know. But if I had to guess I’d say that maybe the last ten years of austerity, the emboldening of the right wing, violence against minorities and women, and of course the pandemic, have made people search for alternative answers in places they probably wouldn’t have before.

Literature isn’t always able to provide those answers, though I suspect there’s a more genuine compassion for people at its core than our current forms of politics are able to offer.

TFP: You’ve cited Heaney as an inspiration. Why do you admire him?

JCP: Aside from the obvious – reinventing the Irish lyric, or his humility, or his ability to simplify the profound – there’s a subversiveness to his work that is often overlooked.

The example I always come back to is his 1984 collection Station Island, where the title sequence is just Heaney reckoning with the role of ‘public poet’ through a series of monologues with the ghosts of other (dead) Irish poets and romantic figures. There’s something at once humble and yet slyly confident about such a move. That is, not wanting to foot the responsibility of speaking for a nation yet consciously placing himself within that same lineage.

It’s a perfect example of how his work reckons with the complexity of Irish cultural mores beyond the traditional binaries that we’ve all become used to: Catholic / Protestant; Republican / Loyalist; Irish / British. Heaney’s public addresses seem to interrogate the interests behind such distinctions, and by doing so question the value of labels overall.

TFP: You’re a fan of the sonnet. Why?

JCP: I once attended a lecture in Liverpool, given by German poet and translator Jan Wagner, in which he described the sonnet as a kind of ‘controlled explosion’. I always thought that was an apt description, since most examples of the form tend to teeter on the edge of revealing either too much or too little, but if they’re carried off correctly can reveal just enough to spark a reader’s interest in a subject.

From a writer’s perspective, staying on the right side of brevity is an important skill to develop, and to my mind there’s no better way to train yourself than to stick within the well-worn, prefabricated bounds of a form which has passed through everyone from Petrarch to Terrance Hayes.

It may sound melodramatic, but poets now are publishing books into a world where climate change and the constant threat of poverty and war have made the future perpetually uncertain

TFP: Do you have a writing routine?

JCP: I wish I did, but I’m terribly disorganised. Routine for me is basically whenever I have the chance to collate my thoughts around work or home life or going for pints with mates. Getting on with the business of living first, in other words, and hoping that the poems come after that.

JCP: In general, I think that poetry serves an odd function in that it mostly tends to materialise during important events in people’s lives – births, deaths, weddings, birthdays – only for people to forget about it again until the next occasion. Like a lawyer, say, or a priest.

This is why poetry’s perceived increase in popularity is so interesting, because it could either mark the beginning of a more optimistic age or it could be a harbinger of resignation to the state of the world. Really, the answer lies in whether people see what’s happening as a birth or a death.

TFP: You’ve suggested politically engaged poets with progressive views are ‘fighting back’, comparing them to figures such as Auden, MacNeice and Spender. Can you elaborate on this?

JCP: It may sound melodramatic, but poets now are publishing books into a world where climate change and the constant threat of poverty and war have made the future perpetually uncertain. Couple that with the normalisation of far-right attitudes in media discourse and you have the same situation that Auden, MacNeice and Spender faced in the 1930s. As Auden wrote: “I sit in one of the dives / on Fifty-second Street / uncertain and afraid / as the clever hopes expire / of a low dishonest decade.”

‘Fighting back’ in such a context means simply not capitulating to the mainstream narratives we know are wrong. Documenting the death, disease and violence of our time even as we’re told by the people in charge that there’s nothing to worry about. I think of Raymond Antrobus’s work in that regard, Roger Robinson, Jay Bernard, Momtaza Mehri and Caleb Femi. By telling the truth, these poets are doing the exact same thing that Auden did during the rise of Fascism in Europe in the 1930s, and with Fascism on the rise again, we need to pay attention to those who are calling it like they see it.

TFP: How much did studying a Creative Writing MA shape you as a poet?

JCP: I think proximity to other people who have dedicated themselves to writing as a vocation is very useful. It shatters all preconceived ideas about what writing should be.

In that sense, the fact of an MA qualification is moot, since its real value comes from an exchange of ideas which, often, continues outside the classroom. Into the pub, on the bus into town, standing in the poetry section of your local bookshop.

That said, the teachers who helped me understand how to approach, explore and understand writing have my heart: Leontia Flynn, Sinéad Morrissey and Ciaran Carson on the poetry side, and Garrett Carr, Tim Loane and Darran McCann on the prose side. Call it a rounded education in how to think about writing first, long before one even puts pen to paper. That’s what’s stood to me.

‘Fighting back’ in such a context means simply not capitulating to the mainstream narratives we know are wrong. Documenting the death, disease and violence of our time even as we’re told by the people in charge that there’s nothing to worry about

TFP: What’s this about a failed stint as a Law student, too?

JCP: Nothing will make you want to pursue writing more than two years of the wrong degree. Call it bad careers advice from school, but when I was eighteen I thought that good results and a natural aptitude for reading would lend itself nicely to a life in the legal profession. I was wrong.

Luckily, I had the opportunity to start again, and when I did, I went and did English followed by Creative Writing. It certainly hasn’t been the most lucrative decision I’ve ever made, but it has been one of the happiest.

TFP: What’s the best bit of writing advice you’ve ever been given?

JCP: That old cliché ‘write what you know’ since what you know may not necessarily be the world of straight autobiography or realism, but fantasy, abstraction. We all perceive things differently, and how we interpret ‘what we know’ is naturally always going to differ.

TFP: And what about the best bit of life advice generally?

Tim Relf talked to James Conor Patterson for The Friday Poem. Tim is a Leicestershire-based poet working on his first collection. His most recent novel, published by Penguin, has been published in more than 20 countries. 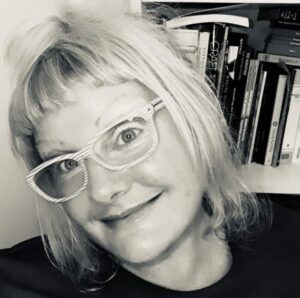