Limited only by things unseen

Anyone who quotes WS Graham’s reflective and elegiac ‘Loch Thom’ as an epigraph to their new collection is a friend of mine. Perhaps that’s too much, but they’ve certainly won my attention from the outset. In fact, the opening lines of McCrae’s title poem ‘Hex’ are so persuasive and perfectly pitched that I was hooked yet again:

One’s opportunities to be unhappy are
Unlimited. Or limited, but only by
One’s own imagination, which is powerful
But fragile, is defenseless,       but is limited
Only by things unseen.

A fist-pump of agreement would not be the appropriate gesture here, but McCrae has a knack of getting to the heart of the matter very quickly, even in poems that, to use Les Murray’s term, tend to ‘sprawl’ into intertext, allusion and cultural references. From the opening lines, the reader can breathe a sigh of relief that they are not reading yet another collection of safe poems of sententious proverbializing about the wonders of positive thinking. These are poems written by a rightly aggrieved party — the poet, being black, having been raised in an abusive and racist milieu by his white grandparents. ‘Hex’ is a remarkable poem to open with. It is steeped in a broth of pop music references but is its own genre of music, coined by the speaker themselves. We’re told that John Lydon’s post-Pistols band Public Image Limited came close to hitting upon the essence of ‘Hex’ but that Lydon himself has ‘since gone bad, or more offensively / Is who he always was’.

McCrae has a knack of getting to the heart of the matter very quickly, even in poems that, to use Les Murray’s term, tend to ‘sprawl’ into intertext, allusion and cultural references

We also hear about Morrissey who is also a bit past his expiration date. These are all old(ish) white English men who have moved to America. Once subversive or at least genuinely challenging in their music, they’ve now made the seemingly ineluctable lurch towards right-wing reactionariness. Pace Vivienne Westwood who made her fortune from punk couture but who now hoovers up as many royal gongs as she can. It’s little wonder that the poem ends at the Capitol Hill riots with the death of a pro-Trump protester and the muddying of the second coming of Jesus and the call by the mob for the reinstatement of President Trump. What’s troublingly paradoxical and fitting about the poem is that it reminds this particular reader of two towering greats of English poetry. The closing lines that ask the reader ‘O music / Where have you fled? O music, who will make you new’ evoke the claim by Auden that poetry – or indeed music – makes ‘nothing happen’, which is a poem not about political lethargy but rather the opposite. ‘Hex’ is also very reminiscent of T S Eliot’s claim, in ‘Tradition and the Individual Talent’ that the poet is most original and alive when being haunted by his dead predecessors:

The dead old art will suffer further life if new
Artists of irresistible ability
Work to extend it, though such artists must not seek
To extend the      dead old art, or they will fail, but must
Make only what they must       make

The poems in Hex and Other Poems have the feeling of being utterly necessary utterances, that this is not just a repetition of the old, dull tunes. It’s perhaps more an indictment of this reviewer that his scope is narrowed to the influence of dusty, dead white men. Some of these poems are more surrealistically allegorical, such as ‘The Day the Dead King Spoke the Bomb’ which has all the quality of a feverish dream, though clearly based in reality. In ‘Inquiry Preliminary to the Examination of Evidence’ we are introduced to a poetry where the term ‘whiteness’ is significantly loaded. ‘Body’ being a rather neutral or clinical scientific term, the poem nonetheless persists — metaphorically — that black bodies must always know where white bodies are:

y other. Measure it. The space       between
What one white body       sees and what will be
True about what it sees is briefer than

The space between the waves that hang a word
On air and the thin air on which it hangs
Measure it. Take       the measure of it hanging.

The fragmentation and caesurae of these poems say so much about the poetry that is lost between the gaps and cracks. Three of the poems are direct meditations upon the issue of race via language, the body and the mind, ‘race’ itself being a dangerously two-edged word. ‘Race in Language’ seems to subvert the comfortable rich American hobby of seeking one’s ancestors. Here the speaker traces a family line back to Africa and realises that he cannot speak a single word of the ancestral tongue but that he would be happy to ‘stand forever’ trying to learn:

There, I could touch a tree, say     Tree, then point
To them, then back to the tree,     or thump my chest
And say my name, or say You are my aunt

Or say You are my father many fathers
Before him.     What are we?     What is your word
For you?     What do you know about the ocean

In ‘Race in the Mind’ traumatic childhood memories of racist abuse are recalled. It’s a long poem that dredges up the past — grandparents who always undersold and short-changed the speaker into believing they were much less than their true ability. But the poem has its own revenge as it imagines a white supremacist grandfather sitting on a stoop with his like-minded friends. The poem is about property, and how a human body cannot be owned, but that the very porch his racist drunken grandfather and friends sat on was:

rotting beneath their feet
And rotting in their hands, and rotting
Between the yard and the unbounded
Dark, not the opposite     of the white
Light, but its limit

… one of the most intellectually, topically and politically alive collections in recent years

The collection ends with a more ostensibly environmental poem ‘The Moon Is Drifting Away from the Earth at a Rate of Four Centimeters Per Year’. While the opening stanzas put the evanescence and pointlessness of our lives into context against a cosmic backdrop, this poem is again a coded and startling take on black experience. The moon is an ‘Other’ planetary presence and it is slowly recoiling from earth: “It has been theorized the moon was struck / From the earth, was torn from the earth”. There is so much historical and emotional freight in those lines — 1). Were are all “Jock Tamson’s bairns” (we’re all from the same source) but 2). Lunar matter was torn from a terrestrial source. This simultaneously implies the ‘othering’ process so often used in the West to distinguish between those it (wrongly) considers native or foreigner but it also alludes to a deeper, historical severance, a wrenching of people from where they belonged:

You felt your body altogether was
Yours,     separate from the place where you were living
Or not     yours, but a part of the place, if ever
Either, not either     since you were a child
You’ve always been a moon of where you’ve lived

This review began by mentioning an epigraph which it will now use as an epilogue. W. S. Graham’s poem ‘Loch Thom’ talks of everyone the speaker knew as being dead, even the trout “Leaping from their sad rings are dead”. And while there is mortality aplenty in this book, it is one of the most intellectually, topically and politically alive collections in recent years. The poet, like the speaker of W S Graham’s poem, is a survivor who has an afterlife, one who enables the continuation of the song:

My mother is dead. My father is dead
And all the trout I used to know
Leaping from their sad rings are dead. 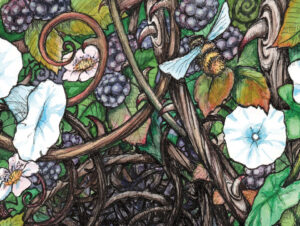 You make a mirrorball out of the rain