Friday Poems in the Anglosphere

The Frip has a scout around for other Friday Poems, from Pan Macmillan and Seren Books in the UK to radio and print in Australia, New Zealand and the USA

Friday I’m in Love. I’ve got Friday on my mind. It’s Friday, Friday, gotta get down on Friday

When we decided to set up a new poetry website sharing a new, unpublished poem once a week, Friday seemed like the best day to do it – would anyone sit and read a poem over coffee on Monday morning? – and when we tried to buy the web address thefridaypoem.com we were surprised that nobody had already bagged it. We knew Pan Macmillan did a Friday poem, but we didn’t think we’d be treading on their toes so we went ahead and bought the address. Then we found out that Seren did a Friday poem. Trawling the web, we found more. Seems like quite a lot of people have come to the conclusion that Friday is a good day for sharing a poem. But nobody is doing it quite like us.

Friday Poems in the UK

Pan Macmillan offers a “brand new poem” every Friday. You can sign up to the Pan Macmillan Friday Poem here. The site posts oldies but goldies from solid favourites like AE Houseman, Keats, Robert Burns or Emily Dickinson, or previously published poems by proven contemporary poets like Rachel Boast, Robin Robertson or Kae Tempest, pretty much all of whom are published by Picador, Pan Macmillan’s literary imprint.

Seren Books’ blog, Well Chosen Words, posts a new poem every Friday, all from books published by Seren. You can sign up to Well Chosen Words here. It’s been going for a while – the first post was on 17th October 2014  from Katherine Stansfield’s Playing House:

There’s no such thing as pandas

I cut my teeth on Newsround where  ‘And finally’
meant pandas: pandas on planes, panda love
at London Zoo, the Queen unveils a new panda.
There was something about them, even then.
Those tricks-of-a-hypnotist eyes. The big pads
moving like hands. Were they shoes
inside the feet? I wasn’t sure until I saw
the sneezing baby make her mother
lurch in shock on YouTube. Then I knew:
pandas are just people in suits, having us on.

Elsewhere in UK, the Toolbox blogs an intermittent Friday poem (DH Lawrence, Erica Jong, Basho); Huff Post UK posted a handful in late 2011 / early 2012 (Lewis Carroll, Wendy Cope, Vicki Feaver) and … that’s about it. None of these publishes new, unpublished poems drawn from submissions. You’ll find lots to like, but you won’t be among the first to read the poems and you can’t submit your own stuff.

What about the rest of the Anglophone world? The Spinoff is a New Zealand online magazine covering politics, pop culture and social issues. It has published a Friday Poem since 2014. Editor Steve Braunias collated some of the best of these, together with poems from established poets, for an anthology The Friday Poem: 100 New Zealand Poems, published by Luncheon Sausage in 2018. The Spinoff publishes new, unpublished poems and, occasionally, poems taken from books shortlisted for a prize.

ABC Radio Australia also runs a Friday Poem feature. It started in April 2020 when some poets were asked to read something on air to help listeners get through the pandemic; the pieces were often written especially for the show. It’s worth a listen; it’s lovely to hear poets reading their own stuff.

There are a couple more. Eileen Kohan is a writer in Manhattan Beach, California and runs a blog called Workthoughts; she used to post regular Friday poems up to the end of 2018 and has posted sporadically since, generally published poems by established US writers such as Mary Oliver. And Chicago blogger Deacon Chuck Thompson posted a bunch of his own work in 2014, in between praying and preaching.

Most interesting is the Sustainable Commons blog from Hamline University’s Center for Environmental Education. It is run by Edward Hessler and a Friday poem has been posted every Friday almost without fail since October 30, 2015. Hessler seems like a bit of a character. His bio says he “likes violets, including yaller ones, June berries, history and the nature of science.” He also enjoys Minnesota’s three biomes and living as lightly as he can (though he claims little success at this). “Ed dislikes neckties and is not fond of high dew points.”

It is National Buttermilk Biscuit Day. Foodimentary (a website detailing national food holidays) has the facts, figures, photographs and food history to help celebrate it.

Quote: If someone says that he can think or talk about quantum physics without becoming dizzy, that shows only that he has not understood anything whatever about it. – Murray Gell-Mann

* Murray Gell-Mann (1929-2019) was a theoretical physicist who was awarded a Nobel prize for codifying the fundamental particles.

The link takes you to the poem ‘Murray Gell-Mann’ on The Poetry Foundation, which begins:

He was my idol when I was seventeen
And keen on physics. I had breakfast with him
At a math contest in 1963, in a hotel on Mission Bay
In San Diego. I was too star-struck to remember
What we talked about, but I remember his seersucker jacket
And how young he seemed. I wanted to be like him,
Think like him, know what he knew, discover
What he hadn’t discovered yet, and now look at me:
Reading his obituary in the Times today
I wondered where that life that used to seem so
Clear to me had gone, sitting here in our dining room
In Milwaukee (which to me in 1963 was just a baseball team
Somewhere in the middle of the country), a minor poet
Light years away from physics, inhabiting his poem.

You can sign up for Friday poem posts on the Sustainable Commons blog via netvibes, MyYahoo or Atom. It all looks a bit old fashioned – not many people use Blogspot these days and the Frip’s resident teenager laughed rudely at Yahoo – but Hessler has interesting and eclectic taste and his comments are generous and thoughtful.

After some time spent with Google finding these resources we came away with a renewed appreciation of the breadth of interest in sharing poetry online. Of course this isn’t limited to Fridays; there are poems being shared throughout the week, most notably Carol Rumens’ poem of the week in the Guardian, and Oxford Brookes University’s weekly poem. Much of the poetry shared, however, is from established poets, and has already been published.

The Friday Poem publishes original, unpublished poems drawn from a submissions procedure. We don’t have a publisher to please, or particular poets to promote, we just want to find exciting new voices engaging with the language in an interesting way. If you submit, you have as good a chance as any to have your poem on our front page. If you subscribe, you will be among the first to read a new poem or spot a new voice. We hope our website is easy to navigate, and accessible to all. So what are you waiting for? If you haven’t already, subscribe to our weekly newsletter, complete with Friday Poem, here. 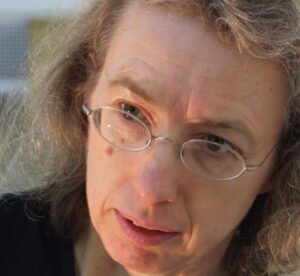 Essay: Richie McCaffery looks at the poetry of Elizabeth Burns