Across her previous three collections, the first of which, At Home in the Dark,[1]Anvil Press, 2001 was published two decades ago, Greta Stoddart’s elegant poetry has always explored the limits of knowledge, through close observation. But that philosophical inquiry has never been a dry, academic exercise: whether turning her eye on – inter alia – childhood, motherhood, Catholicism, sex, vases, plastic bags, television, gardening, beds, a robin, other natural wonders, deaths (of a parent and, in arguably her best-known poem, of a pool-attendant),[2]‘Lifeguard’ from Alive, Alive O, Bloodaxe, 2015 grief, and much else besides, Stoddart poems have been consistently intriguing, and often infused with dream-like qualities which tip the reader into extra-dimensional weirdness. Purely narrative poems are rare in her oeuvre, and those that do exist are discursive, like a film or a novel branching into sub-plots which may or may not be resolved. Her exterior focus has not become rehashed Imagism; nor have her inward investigations been detained in the Confessional.

The 34 poems in Fool, Stoddart’s first collection since 2015’s Alive Alive O, are, in general, noticeably looser in form than their predecessors, with more white space. That freedom assists the conscious quest(ion)ing expressed within the words. Stoddart ranges dazzlingly across the nature of time, reality, happiness and self in what feels like an understandably feverish, obsessive anxiety. From the off, self-doubt and notions of self-knowledge are front and centre, as the poet reflects on her younger self training in physical theatre at École Jacques Lecoq:

and it wouldn’t be so bad to die then
being as I was so without fear
so without anything
being as I’d found who I was
in the act of being
that girl on the bench
fool that she was
for all that she didn’t know.

Only in the title poem does the word ‘fool’ appear to be deployed in the sense of the archetypal figure as in, for example, King Lear; moreover, the senses of ‘being fooled’ and ‘foolishness’ are the principal concerns – how one is fooled by appearances, and how, and in what circumstances, one is a fool; and whether these matters should be accepted or fought against through a questing for knowledge.

Stoddart ranges dazzlingly across the nature of time, reality, happiness and self in what feels like an understandably feverish, obsessive anxiety

If that sounds dull, Stoddart’s poems are anything but. At times, the quest seems almost unbearable for the poet in its examination and, later, in its relentless self-examination. The child-like querying of ‘What is a Question’ is answered at the start of the next poem, ‘Perfect Field’: “But then I think having all the answers / would be a bit like being dead.” The way the poems are ordered in the book is important, because they flow into each other. In the next, ‘Second Nature’, a long unbroken prose poem, an implicitly self-berating statement sparks off a serious of digressions:

I have always been very bad at remembering facts. When I would like to be someone who has some purchase on the fundamentals.

As much as say the influence of Bishop, Brock-Broido possibly, or Donaghy, there are shades of great prose-writers, maybe Berger, Borges, Marías or Sebald, and even the diverse exemplification in Wittgenstein’s Philosophical Investigations, in the way that Stoddart shifts the viewpoint in her poems through time and place. In this poem, the focus turns, wittily, to sainthood (and then on to miracles):

Once I came across a modern-day saint in a church in Seville. I have to say I found it hard to feel reverence in front of a faded Kodak photograph. A saint is not supposed to have worn a cagoule or wandered down the aisle of a supermarket. But clearly I am out of touch. I myself stuck in a past of gloomy churches and flat impressive faces. What are saints anyway but our own better selves following some fierce instinct right to the brink of self.

Stoddart’s searching is never so deadly serious as to get stuck in blind alleys; or not to encompass the absurd, which reaches its apotheosis in the Beckettian monologue of another prose poem, ‘The Long Grass’ – “What am I doing here staring at the moments as they move and gather, gather and move” – and its facing poem, ‘Performance’:

[…] I don’t feel I know
very much at all
but my poems – look at them
waving their inky little hands in the air!

The theatrical connotation of that poem’s title continues in the next one, ‘Flowers for my Ego and a Dark Stage’, a concrete poem resembling a spotlight’s beam.

As well as metaphysically, Stoddart’s poems sometimes hark back subject-wise to those in her previous books: an intruder in ‘How I Come to Clean the Window’ – ‘Go little spider go!’ – echoes the poetic dissertation of ‘Spiders’;[3]Alive Alive O, p. 44. ‘What is a Tree’ links back to another gorgeous concrete poem, ‘Wild Pear’.[4]Ibid. p. 42. It is enviable how Stoddart has constantly pursued certain matters, but always with a freshness of angle and expression, and with a technical brilliance masked by the deftness of her touch. She mixes the dark with the light as well as any poet writing today. The bleak, middle-age despair of ‘Cold and Lonely Wastes’ ends breathtakingly:

Here, as elsewhere in Fool, the absence of punctuation bestows a crisp spontaneity upon the thought. Two poems later, Stoddart returns to the realm of the eerie with ‘The Little Living Room’, an utterly marvellous tale (it opens “When I was nine / a family came to live inside me”) reminiscent of Calvino:

Among current major UK poets, Stoddart’s poetic voice is perhaps as hard to categorise as anyone’s, except in its excellence. Even more than its wondrous three precursors, Fool will demand re-readings to absorb its full richness. 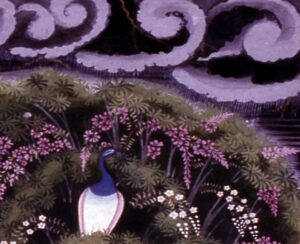