The mind begins this squeaking

In Finishing School Michaela Coplen writes of innocence and experience. The poems have a fascinating psychological depth grounded in everyday objects and scenarios, and it’s this that makes the pamphlet a mature debut. These aren’t just poems about growing up, but creative enquiries into relationships that often have a sinister, shadowy aspect.

‘Chest’ is an early favourite. It begins “Ever so willing a plaything”, and hinges on the relationship between two sisters. They play at dressing up using a cedar chest, and then the speaker is locked in it whilst the other lies on top. The game turns semi-serious by the end:

I would be quiet.
How many unmarked hours,

half-believing, we could lie there –
testing who would break

first, bring me back to life.

Notice the line break at the crucial point between break / first – this is typical of Coplen’s carefully crafted pieces. There are no wasted words or spaces. The poems are often short, but their brevity is always pointed. The poem ‘Apple’ is like this. Barely eight lines in length, much is conveyed through its well-wrought construction:

All you have to be is good.
Good is a dog that sits and stays.
So the teacher nods, ascending.
Bad is an apple in the eye.

In school you are so quiet.
You can play the quiet game.
Then the mind begins this squeaking
like a mouse or a garden gate.

Finishing School is in fact written in abecedarian form (arranged alphabetically) and ‘Apple’ is, appropriately, the first in the sequence. It has a casual innocence reminiscent of early school learning and the Genesis allusions give it a darker undertone and correspond to other poems, such as ‘Egg’, which explore sexual awakening and experience.

These aren’t just poems about growing up, but creative enquiries into relationships that often have a sinister, shadowy aspect

‘Egg’ talks of female growth. A mother is a distant figure, so too is a grandmother. The speaker has “learned the hidden body parts” and wants her audience to be aware of her knowledge (“want them to know I know”) in the childish way we often do when young. By the middle of the poem, “changes, / we are taught, will come on fast / and set us ticking”. The innocence of this statement is underscored by the pronoun ‘we’ – the speaker is part of others on the same journey of self-discovery. But the poem then turns, as the grandmother figure spells out

a trick to navigate the system:
always spend the night with friends
when your husband’s
on a mission (a woman who stays

in the house alone at night
must want what’s coming).

Innocence is replaced with knowing, curiosity with spells and tricks. By the end of ‘Egg’,

sex was breaking over us
like the breaking of a shell

Finishing School isn’t just a pamphlet about coming of age, there are also moving poems. You have to re-read them in order to catch the darker notes. ‘Figure’ is one of these, where a mother is compared to Saint Agatha – both saint and mother have lost breasts whilst the speaker grows hips. The poem captures, I think, the crux of life’s banal cruelty: one person grows and flourishes as another perishes or has problems. Also, that we are ‘flesh’ – a word that appears twice in the poem – we are transient beings, mortal.

The last poems in Finishing School are as tender and vulnerable as the first ones. But there is a difference … innocence has been replaced by experience

Another poem which examines the mother / daughter relationship is the intriguing piece ‘Middle’. Like ‘Chest’ it begins ever so casually with the line “My mother and I are both eighteen”. The poem develops slowly as speaker and mother are driving together in a car with “the windows down”. There is a wonderful line near the beginning which I’d like to highlight:

[…] all the fields
are full of passing time

Here is the heart of the poem. Both speaker and mother are in the middle of an important rite of passage: “We’re both leaving home for college’”. It is also the crux of the whole of Finishing School which swivels on the theme of growing up. Later in ‘Middle’, mother and speaker:

[…] close
the middle distance, the road

beneath us groaning where the concrete’s
wearing thin. The radio

fades out and in
with songs that we both know

The radio that fades in and out here has a ghostly quality much like the figure of the mother – and other characters – in this pamphlet.

The last poems in Finishing School are as tender and vulnerable as the first ones. But there is a difference. It is clear from ‘Tubes’, which is set in a hospital, and ’Urn’ – about a funeral – that innocence has been replaced by experience. We are a long way now from ‘Apple’ where the speaker in the poem wants to please in school. In ‘Urn’ there is more of a wry knowing on display: “The photos you show at the funeral should emphasise my beauty” – yet at the same time the speaker confesses in ‘View’ that “if I were more like my mother, I’d know what to do / with all these ends”.

Nell Prince has been published in New Poetries VIII, PN Review, Wild Court, and Perverse, and has work forthcoming with Anthropocene. In 2016 she was runner-up in the Jane Martin prize. 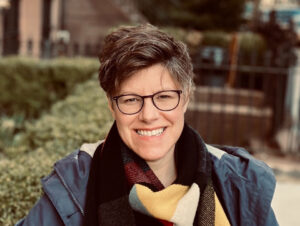