Ferenc Juhász [Yoo-hass], 1928-2015, is associated with a sort of rural expressionism and credited, alongside his contemporary László Nagy, with bringing folk motifs into mid twentieth-century Hungarian poetry. His greatest admirers would admit that he published too much, but this reissue by Shearsman Books of translations originally made by David Wevill in the late 1960s shows the best of Juhász’s singular vision and style.

In Hungary Juhász is sometimes accused of too frequent indulgence in dense clusters of consonance, in arcane allusion and recondite vocabulary. There’s barely a trace of that here, for which we can no doubt thank Wevill but also the inherent biases of translation itself. Directly referential imagery of the natural world and of everyday experience tends to survive translation pretty well, irrespective of whether the referents are treated realistically or symbolically. This ready transmissibility of animals, colours, clothing and the like can’t help but influence the choice of poems to be translated and thus how the poet is received abroad. The poetry of Georg Trakl, for example, almost entirely innocent of politics or of any socio-cultural allusion, comes across very well in English, and the easy portage of natural imagery also helps explain why the Pasternak of My Sister, Life makes more pleasurable reading for us than any but a very few poems by the equally gifted but more allusive Mandelstam. Moreover the influence of translation may also be apparent upstream of the poet we happen to be reading, if we take the trouble to look for it. Juhász, like many of his contemporaries in Central and Eastern Europe, was affected by the brief but intense popularity of Sergei Esenin, and echoes of the Russian poet’s style can be felt in some of the poems included here.

Readers of this book will be delighted first by the clear pictures Juhász gives us of golden onion rings swimming in a rich broth, or the moon ‘perched on a blue shoulder of sky’

Wherever the boundaries of the linguistic watershed are drawn, readers of this book will be delighted first by the clear pictures Juhász gives us of golden onion rings swimming in a rich broth, or the moon ‘perched on a blue shoulder of sky’. In ‘Comet Watchers’, the domestic and the cosmic are combined in a sparely beautiful tableau in which the authenticity of witness is brought to a shine by memory and stripped of inessentials by precise lexical choices and narrative emphasis:

Barefooted, in shirts and underpants
the whole village gathered out there in the cold;
scared old women, sleep-white faces
frozen in the white light of another world.

Here the poet’s eye maintains a familiar detachment from what’s described, but Juhász also has a modernist interest in subjective and destabilised perspectives. In ‘The Tower of Rezi’ he is watching swallows through binoculars. He wonders at the ‘modern wizardry’ that brings the birds so close, but takes this further into a shamanist conceit of self-identification:

And I’m flying – it’s me, not the bird!
The wonders this lens can do!
The self swirling and dipping
forgets it is only watching.

In terms of both his biography and his poetry, Juhász might be thought of as caught between the ingrained codes of traditional rural life and the new hyperreality of the city and its contrivances, and I think it’s reasonable to interpret the inconsistency and unruliness of his oeuvre as an honest attempt – honest not least in its gnarliness and contradictions – to unify very different kinds of experience and valorisations of human life.  Juhász’s persistent attempts to posit a holistic significance behind such apparently distinct phenomena as daily human life and the movements of the stars point to something much more interesting and significant than his ‘breadth of interests’, which is a dully secular statement of the obvious. Instead I think he yokes these things together because in the pagan peasant consciousness from which he emerged – which is already an immanent synthesis of symbols, and inherently metaphorical – everything is connected and really does affect everything else, and it was this he sought to restore. As the Polish poet Aleksander Wat noted, one of the most grievous psychic wounds inflicted by modernity – in fact by the profane temporality of history itself – was precisely the loss of this ability to view oneself and the universe synthetically.

Juhász’s most celebrated poem, ‘The Boy Changed into a Stag Clamours at the Gate of Secrets’ explores this clash of worldviews, but situates it in a mother-son dialogue about separation and the inevitability of painful change. The poem thus transcends the cultural particulars of pagan folklore and the experience of the communist metropolis and creates something universal, psychologically true and emotionally resonant:

Aiii mother, mother
I cannot go back,
don’t give me your twists of milk-loaf
or sweet goat’s milk in a flowered glass
Don’t make my bed springy and soft
or pluck out the throats of the geese –
throw the wine away, pour it over father’s grave
weave the onions into a wreath,

Attending to what was lost in the rapid movement from traditional rural life to the modernist city also invites awareness that literary history, like every other kind, is retrospectively justified by its victors: looked at ethically, though, Juhász’s ‘gift’ of ‘folk motifs’ to the canon of overwhelmingly urban European poetry seems meagre recompense for the enforced change and social and psychological destruction that helped provoke it.

Though Wevill has sometimes taken liberties with the strict sense of the originals, the standard and readability of the English poetry can at times make you forget that you’re reading translations at all

The schisms and tensions of his era are reflected by Juhász in the violence of his imagery, to which Wevill also seems drawn. Indeed there are clear affinities between Juhász’s poetry and Wevill’s own, not only in the fascination with violence and the damaged body, but also in the treatment of these themes through surrealism. Surrealism itself, of course, could in different contexts and in different hands be either an honest attempt to portray the fractured modern experience or an excuse for self-indulgence in the general decadence. Whatever the case, some of the imagery here nowadays strikes us as overwrought:

I drown in the purple beard of a neon man
whose tentacles lick through the skull to devour the brain.

Emotional force is increased when Juhász shows more restraint, as in this richly evocative stanza from ‘Four Seasons’, which seems to show the direct influence of Trakl:

And winter’s over. Not like winters we knew.
A sky of bone crackles in the jaws of the church bells.
Teeth chattering like machine guns I went out begging crumbs for you.
The still forest glittered like broken glass.
Shadows blue as hyacinth blurred from the frosted railings,
and grieving, hooded in quiet, the animals, tiptoeing, circled your window.

As should already be apparent from this and the above extracts, readers of this book are indebted to David Wevill for the uniformly high quality of the English versions. Though Wevill has sometimes taken liberties with the strict sense of the originals, the standard and readability of the English poetry can at times make you forget that you’re reading translations at all. Even denser passages of difficult Hungarian are carried over with rhythm and grace and without sacrificing the sonic playfulness of the original, as in this description of a fish:

Born with no lungs, just a blister
floating in a cage of splinters,
listless fins and hyperthyroid eyes.

This book appears as part of an effort to bring all of David Wevill’s work back into print. Like that of Juhász, Wevill’s poetry has fallen out of favour since the height of its heyday in the sixties and seventies. Both poets, however, retain a dogged cult status, which along with their temperamental affinities makes them natural companions. This re-publication should be celebrated as the resurfacing of two gifted and idiosyncratic poets who deserve to be better remembered. 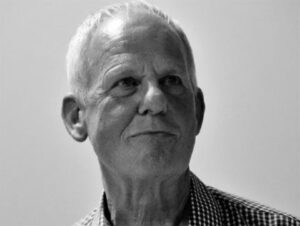 Feature: Will Daunt  looks at the work of Roger Elkin and the critical relevance of his latest project The F Word