Ai-Da is the world’s first ultra-realistic humanoid robot artist. It — OK, we’ll call it ‘she’ — made history in 2019 as the first ever robot who was able to draw without any human input. Now she’s writing poetry.

She had her first gig last Friday (26th November) at the Ashmolean Museum in Oxford, where she read some original poems which she had written (generated?) after Dante’s Divine Comedy. She’d been given the epic three-part narrative poem in an English translation, then used her unique algorithms and a data bank of words and speech pattern analysis to create her own work in reaction to Dante’s.

Ai-Da was devised in Oxford by Aidan Meller, and named after Ada Lovelace, computing pioneer and daughter of poet Lord Byron and mathematician Lady Byron. Meller says that Ai-Da’s ability to imitate human writing is “so great, if you read it you wouldn’t know that it wasn’t written by a human” and that when Ai-Da was reading her poem on Friday evening, “it was easy to forget that you’re not dealing with a human being.”

Really? Here is one of her poems.

We looked up from our verses like blindfolded captives,
Sent out to seek the light; but it never came
A needle and thread would be necessary
For the completion of the picture.
To view the poor creatures, who were in misery,
That of a hawk, eyes sewn shut.

Here’s a link to the Ai-Da website, and here are links to Ai-Da reading more of her work:

Ai-Da reads Freedom: Poetry of Consolation I on YouTube

Poetry? We think not. Why not? Metaphor. Metaphor is fundamental to much poetry, but metaphor is difficult for computers to understand, especially metaphors that are not in common usage. Voice-activated digital assistants such as Alexa and Siri need commands to be clear and literal; while they can understand the meanings of many words, they are often confounded by creative uses of words which go beyond their pre-programmed vocabularies. Some scientists say that studies into the cognitive processes used to create and understand metaphors over centuries could eventually help artificial intelligence systems to create and understand metaphorical language, but we’re not holding our breath. And, looking at Ai-Da’s current efforts, we’re not putting an order in for her debut collection either! 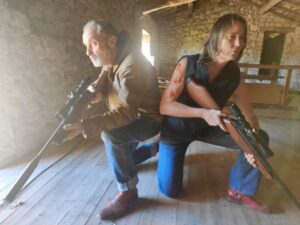 In praise of teachers

Editorial — in praise of teachers