The writing of an epitaph is a particular skill — it needs to honour and celebrate the unique qualities of an individual, while also remaining pithy. In his poem ‘Epitaphs’ Stephen Payne plays with the form, and nails it. The humour and the full rhyme suggests a lighthearted approach but Payne is both clever and careful in his word choices and ‘Epitaphs’ memorialises its subjects with sensitivity and insight. It’s nicely done, and a shoo-in for our Friday Poem this week.

Although his future’s incorporeal,
his spirit will remain sartorial.

At ease, he’s dressed in khaki twill
the buttons polished as for drill.
It was his most essential skill,
to bend to some external will.

His ashes, taken out to sea
and scattered by the headland’s lee,
will enter and depart the bay
twice in every lunar day.

If life is one long game, his flaw
was how voraciously he kept the score.
A good innings, but less than he foresaw.
Whatever he attained he wanted more.

The race that ran him ragged is run.
His days of making do are done.
His poetry may yet live on.

At last, a proper rest, not just a nap
against the wall beside an upturned cap.

No more pockets will be picked
nor combinations cracked. He’s nicked.

Stephen Payne is Professor Emeritus at the University of Bath, where until September 2020 he taught and conducted research in Cognitive Science. He lives in Penarth in the Vale of Glamorgan. His first full-length poetry collection, Pattern Beyond Chance, was published by HappenStance Press in 2015 and shortlisted for Wales Book of the Year. His second collection, The Windmill Proof (September 2021), and a pamphlet The Wax Argument & Other Thought Experiments (February 2022) were published by the same press. 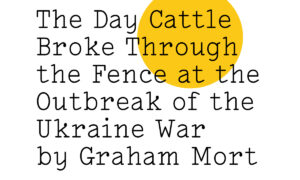