Women and girls must be alert to the mechanisms of male power and (literally) ready to run. That’s the message I get from Fiona Benson’s new collection Ephemeron.

In ‘The Chimp House’, one of the long confessional prose poems near the end of the collection, Benson takes her small daughter to the zoo. Staring through the reinforced glass, she is shocked by the violence exhibited by a “grey hackled” male chimp, when:

boiled over like a sudden, lidded pan,
fly-stung, inhabited by blood, so diminished
in his territories – all his lost forests and tanked-in fury –
he wants to kill.

Benson snatches up her daughter and runs out. She wants to protect the child, although, she says, “isn’t this what she must learn – / how if you are female or small, you must run”. An earlier poem in Ephemeron tells the story of Hermes’ pursuit and rape of Apemosyne, granddaughter of Minos, and her death at the hands – well, feet – of her brother. Apemosyne’s grandmother, Pasiphaë, says,

Listen to me, granddaughter,
as the moonlight finds your swollen face
get up out of your body –
get up and run.

This is Benson, still sounding the alarm. She wrote in similar vein in her Forward Prize winning second collection Vertigo & Ghost. There, Zeus is a deranged and violent sexual predator who communicates in italicised capitals LIKE THIS. In Ephemeron, Benson again uses the material of ancient myth to consider and confront something entirely contemporary, and comes to a similar conclusion. Men and Gods – especially those diminished in their territories – can be brutal, and our basic urges towards sex and dominance often do damage, mostly to women.

Of course Benson’s message is more complex and nuanced than this. She also welcomes and celebrates aspects of the primitive. The first section of Ephemeron is a dozen or so poems from Bioluminescent Baby, her commissioned pamphlet about insect love published by Guillemot Books last year, which received much praise – Kate Kellaway in The Guardian called it exceptional: “elating, moving and revelatory”. The first of these, ‘Love Poem, Lampyridae’, highlights the imperative of the reproductive urge, the female glow worm twisting and turning “her tail’s green fire / like bait”, signalling: “come find me – it is time – and almost dawn” , and her male counterpart is similarly insistent, “where are you – it is time – and almost dawn …”

This primitive sexual urge is also seen in the young girls at her boarding school “gym and dance display” whose desire rubs against their parents like “cats in heat”, and in the old white male stalker who exposes himself to the girls from outside their window, “tugging at his own string / like a dirty talking doll”, leaving Benson aware that even now, beyond her window, “something moans / and presses in“. It is also seen in the behaviour of the Gods, of course. Pasiphaë says of Minos, “My husband’s tastes were various” and we are left to (mostly) guess at what that means. We see it in Benson herself too – when a fellow lab worker turns over a cricket in her hand over and incidentally brushes her palm she feels,

that giddy inwards swoop, its pheromone wash,
its compulsion and I turned away confused
by that sexual shiver, its tremble down my spine –
my body now at forty a lit fuse, a gorgeous fluorescent yes

I read Ariadne when it first came out, in awe … Benson inhabits the story wholly, and we do too

Along with the poems from Bioluminescent Baby, five of the poems in Ephemeron come from Ariadne, which won the Michael Marks Greek poetry prize 2021 and was subsequently published by Broken Sleep Books. Ariadne was described by judge Ruth Padel as “a devastating new sequence of poems, truthful, tender and appalling”. These five poems form part of the largest section in Ephemeron, an extended sequence of  ‘Translations from the Pasiphaë’, which retells the story of Queen Pasiphaë, King Minos, and the birth and life of their ninth son, Asterios, aka the Minotaur. Added to this is a dozen or so ‘Boarding-School Tales’, where Benson revisits her time as a school girl, and six long ‘Daughter Mother’ poems round the collection off.

I read Ariadne when it first came out, in awe. Five poems tell the story of the infant Minotaur, his imprisonment in the maze, and his death at the hands of Theseus. Benson reimagines the minotaur as a disabled child, and his mother Pasiphaë as having chosen to keep him rather than allow him to die by exposure as was the custom in Ancient Greece. Benson inhabits the story wholly, and we do too:

One night he turned his face to me and tilted
so I’d stroke his cheek, and signed the words,
slowly, clearly; I heard them
plain as if he’d placed them singly in my brain. Want. Die.
And then he made the sign for help.
Brother, look at me now, I’m signing sorry

Of the ‘Translations’ sequence, Benson says, “I try and recentralise Pasiphaë as the powerful Queen at the heart of so many Greek myths and stories, rather than as a culturally debased figure, the woman who slept with a bull; and I explore her husband King Minos’ descent into brutality and slaughter.” There’s much to appreciate in this section, although I find some of the poems a bit worthy, rather heavy handed, and too narrative-based. Not, however, the one about the keelhauling of Scylla – that is bloody, brutal, and wrenchingly poignant. The girl is pulled under the boat time and again until she is,

and then the fish, the water a scurry of them, soon
boiling round her corpse. She slipped from the ropes and was gone.

It’s a powerful, immersive, involving journey, and made all the more compelling by the fact that Benson is clearly not afraid to draw deep on personal experience and tell all

Benson excels when she’s writing from personal experience, and the two sections of confessional poems – ‘Boarding School Tales’ and ‘Mother Daughter’ – hold the best of the book. Boarding School has clearly left its mark on her:

some inwards piece of you is cataleptic still,
like the one who goes on hiding
when the game is over, for years and years.

Which of course begs the inevitable question as to whether the ‘I’ in the poems is Fiona Benson herself, and, given the personal nature of many of the poems, it’s impossible not to assume it is. Benson is prepared to bare all. To examine her own motivations, drives, and neuroses, and to also let us in on the process of examination. In ‘Blue Morpho, Crypsis’ she buys a preserved butterfly and tries unsuccessfully to prise its wings apart. The butterfly resists “my bullying attention, my tweezing and ineptitude / and sweat” and she feels like “like a body-snatcher trying to force a mortised jaw”. She mourns the “bothered corpse” and relates her experience to the process of writing, “trying to force a poem / from this butterfly’s blue sheen”. The poem ends:

It’s a powerful, immersive, involving journey, and made all the more compelling by the fact that Benson is clearly not afraid to draw deep and tell all – about her boarding school crush; about her sense of privilege as a Western White woman testing negative for malaria in Mozambique in a poem which ends, “I do not deserve this life“; about her own discovery of a razor blade aged six:

– so much blood –
the room gone giddy round me and the walls narrowing in,
being sick and telling no one, I was six, I was so sure I’d done wrong —

and about the difficulties of parenting (every parent will recognise this one): “the gravel-harsh voice of the abuser – oh she lies very deep – / don’t make me / you make me – “.

As a counterpoint to this onslaught of violent sexual urges, fear and personal failings, we are offered the maternal, loving urge and the commitment to protect offspring, particularly girl children. Mama Cockroach, Queen Pasiphaë, and Benson herself all commit to the absolute requirements of mothering. Mama Cockroach “would leave your body for your offspring / to dine upon”, Pasiphaë cherishes her deformed child:

He was beautiful, my son.
In his sleep, he shone.
I kissed the wet tufts of his fur,
his damp snout,
his long and delicate jaw.

And in ‘Field Crickets’ Benson says, “whole days I want to curl round my two girls / and hold them from the catastrophic world”. The last section is dedicated “for the mothers” , and in it she writes of “the sore / and phosphorescent work of raising children, /  how mothers move in the dark like shining wounds, / like gaps in being.” The role of the mother is set up as sacrificial, redemptive, almost  a holy act. She ends the poem ‘Dispatches’ with:

I hope my arms seem warm to you
and that you hear me tell you
how deeply you are loved.

and ends the collection with a hope that her younger daughter is “as yet, unscathed.”

Is some of her poetry too prosey? Yes. In the notes Benson thanks editor Robin Robertson for helping her “cut its extravagances down to size”. Even with his help, some of the poems almost start to founder under the weight of their length – ‘Mosquitoes, Mozambique’ is two and a half pages of fairly dense prose which reads more like a travel monologue, and the final poem, ‘Little Basket’, reads as if Benson is recounting her experiences to a close friend. Is this a problem. Maybe. Both are gripping accounts, but I’m left wondering if she couldn’t have formed it more, applied a bit more art and craft. But Benson is a beguiling and empathetic storyteller, and I still want to read everything she writes, long or short. 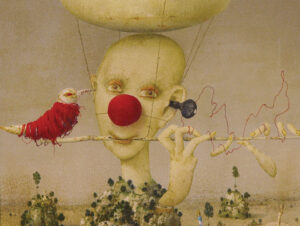